In the week since the military overthrew Myanmar’s democratically elected government, exile Nay San Lwin has been inundated with dozens of messages from his compatriots offering support.

It’s a dramatic change from 2017, when the rights activist, now living in Germany, was disseminating information about the atrocities Myanmar’s military had unleashed against his community—the mostly Muslim Rohingya, who live in the west of the country. Back then, the majority of the messages he received from other Burmese consisted of death threats and abuse.

About two-thirds of the population of the Southeast Asian nation are of the Bamar ethnicity, who are generally Buddhist and dominate the governing class. The other third is made up of over 100 ethnic minorities, many of whom have faced persecution at the hands of the military—especially the Rohingya. U.N. investigators say the armed forces of Myanmar, officially known as the Tatmadaw, have waged war against the Rohingya with “genocidal intent.”

The Rohingya found no support from the civilian government. Indeed, in 2019 Aung San Suu Kyi notoriously defended the Tatmadaw in a hearing at the Hague, and just two weeks before the coup, her government filed preliminary objections to the International Court of Justice over the genocide case it faces. The general population had no sympathy either; many Burmese consider the Rohingya to be Bangladeshi migrants, even though the Rohingya have centuries of history in Myanmar.

But in the wake of the Feb. 1 coup, some Burmese are finally changing their views of their Muslim countrymen. Says Nay San Lwin, who gained 3,000 new Twitter followers in a day last week: “They are now realizing the common enemy is the military.”

Some have even begun apologizing to Yanghee Lee. The former U.N. Special Rapporteur was hailed by the rights community as a “champion of justice for Rohingyas,” while being vilified in Myanmar. When she tweeted a call for the release of Suu Kyi on Feb. 4, the thread filled up with expiations.

“I do want to apologize the way I treated you in recent years regarding Rohingya,” said one user. “[Forgive] me for misunderstanding you. In the recent years, we were narrow-minded,” read another tweet.

Lily (a nickname), who lives in Yangon, tells TIME that the coup made her realize her own double standards. A 39-year-old transgender advocate from the Karen ethnic minority, she says that although she knew what happened to the Rohingya was a “grave violation of human rights” she failed to stand up for them, despite her activism in other areas.

“Without international community strong condemnation and support, I think we will all end up like Rohingya people,” she says.

Rohingya Muslims wait on a hill on Aug. 25, 2019 in Kutupalong refugee camp, Bangladesh, to commemorate the second anniversary of the 2017 crisis when they were forced to flee from their homes in Myanmar
K M Asad/LightRocket via Getty Images

In turn, the Rohingya are hoping that standing in solidarity with the people of Myanmar will help end discrimination against them and bolster their fight for justice.

“We are trying to build solidarity with the Burmese people,” says Nay San Lwin. “Most of the Rohingya activists are supporting the movement in Myanmar.”

Not just activists. Muhammad Dullah fled the country in Aug. 2017 and now lives in the world’s largest refugee camp in Cox’s Bazar, Bangladesh. The 24-year-old Rohingya has started posting anti-coup messages on his Twitter account.

“Rohingya stand with the people of Myanmar,” said one tweet, accompanied by photos of a makeshift signs reading “Protesting against military coup from the Bangladesh Rohingya Refugee camp” and “Military coup” with a large X drawn through it.

“I think [Burmese] may support and stand by us after seeing our solidarity with them,” Dullah tells TIME.

Pictures of Rohingya giving a three-finger salute, a gesture popular adopted by young Burmese in the wake of the coup, have also popped up across social media in recent days.

A Myanmar protester holds a placard during a demonstration against military coup in Yangon, Myanmar on February 7, 2021.
Myat Thu Kyaw/NurPhoto via Getty Images

How will the coup in Myanmar affect the Rohingya?

The Tatmadaw has shown no hesitation in responding to previous uprisings with heavy-handed crackdowns, and cooperation between pro-democracy organizations and the country’s various ethnic groups is unlikely to convince it to reverse course.

It could help to reinforce the regime’s isolation. Nay San Lwin, for example, is calling on Burmese to lobby the International Criminal Court (ICC) to prosecute junta leader Senior General Min Aung Hlaing for atrocities committed against the Rohingya. This, he argues, is the best way to put the Tatmadaw’s commander-in-chief under pressure.

But having a common enemy can only go so far. Cooperation “doesn’t necessarily mean [the Rohingya] are supporting Aung San Suu Kyi personally,” says Washington-based Rohingya activist Wai Wai Nu. “We are standing up for what is right for the country.”

Some experts also doubt the the coup will have a long-lasting impact on the discriminatory views that many in Myanmar have against the Rohingya.

“The divisions between Myanmar people and the Rohingya in particular go really, really deep,” says Prof. Ian Holliday of the University of Hong Kong, an expert on Myanmar. “The Rohingya are not seen as being part of the nation.”

But activists are holding out hope that this will be a turning point.

“It will be very difficult to build a solidarity movement, but I’m not going to give up,” says Nay San Lwin. “We are trying to educate the people that human rights should be for everyone.”

—With reporting by Suyin Haynes/London 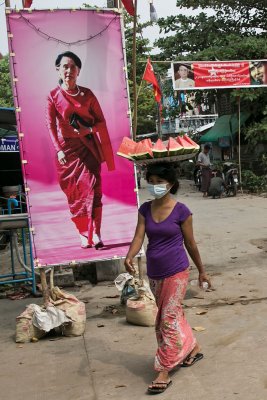 Can Myanmar's Democracy Survive Without Suu Kyi?
Next Up: Editor's Pick