Aung San Suu Kyi Faces New Charges After the Coup. Can Myanmar's Democracy Survive Without Her?

The news that Aung San Suu Kyi had been overthrown in a Feb. 1 coup spread through Myanmar like a shockwave. “Most of the citizens 100% depend on her,” says Kyaw Kyaw, a 28-year old LGBTQ rights campaigner who lives in Yangon, the Southeast Asian nation’s largest city. “Everyone was frustrated and scared.”

Myanmar’s elected civilian leader was idolized even before she came to power. During the 15 years that the junta kept her under house arrest, many secretly kept pictures of Suu Kyi in their homes. After her release, her party, the National League for Democracy (NLD), won control of the government in 2015 elections, ending decades of military rule. She scored an even more resounding victory last Nov. 8, with the NLD claiming more than 80% of the vote.

The country’s fragile push for democracy has always centered around Suu Kyi’s immense popularity. Now that the military has Suu Kyi in detention again—reports say at her official residence, under trumped-up charges of keeping seven unauthorized walkie-talkies—it’s unclear whether anyone else is capable of uniting resistance to the generals, who have imposed a year of emergency rule.

“When she disappeared, nobody knew what to do,” says Kyaw Kyaw.

The truth is that the military never really lost control. Despite the ostensible democratic reforms in recent years, the Tatmadaw—as Myanmar’s armed forces are officially known—retained powerful influence, including control of the defense, border affairs and home affairs ministries. The country’s 2008 constitution guarantees the military 25% of seats in parliament and veto power over any constitutional amendment.

Read more: Myanmar’s Military is Cracking Down on All Forms of Dissent

The coup came after military-backed parties were humiliated in last year’s elections, with the generals alleging widespread problems with voter lists. But international and domestic observers said the polls proceeded without major irregularities, and the country’s election commission said there was no evidence to support the military’s claims.

The Tatmadaw decided otherwise, and has said it will run a new election once emergency rule has ended. But, it’s not clear whether it will stick to the protocols that allowed relatively free elections in recent years. How far the military goes in its latest power grab will hinge on how compliant detained civilian leaders are, and the scale of any protests that may take place in response to the coup, says Dan Slater, the director of the Weiser Center for Emerging Democracies at the University of Michigan.

It remains unclear whether Suu Kyi and her NLD will be allowed to contest any new elections. The woman once called a “beacon of hope” by President Barack Obama won the Nobel Peace Prize in 1991 for her non-violent resistance against the junta. After her release in 2010, she became an icon of human rights, mentioned in the same breath as Gandhi or Mandela. With the help of the U.S. and other nations loosening economic sanctions, she ushered her country through a series of democratic and economic reforms. A road building program, and increasing access to electricity from 34% of the population to 50%, improved daily life for many.

Then came a spectacular fall. Domestically, her failure to push through constitutional reforms, which she had promised in order to lessen the military’s hold on power, caused rumblings. Some activists argued that civil liberties had actually been eroded under her watch and held protests. But it was Suu Kyi’s defense of the military over 2017 atrocities committed against the Rohingya—a mostly Muslim ethnic minority that live in western Myamar—that made her a subject of international scorn. U.N. investigators determined that the violent campaign of arson, rape and murder was carried out by the Tamadaw with “genocidal intent.” Suu Kyi publicly rejected the accusations, defending her country against charges of genocide at the Hague in 2019.

To those in the outside world who deified her, it was a breathtaking betrayal. Amnesty International had bestowed its highest honor on her but revoked it in 2018 in light of her “shameful betrayal of the values she once stood for.” The portrait of her that once hung at Oxford University, her alma mater, was quietly placed in storage.

What’s next for democracy in Myanmar?

Wai Wai Nu, a Rohingya activist now living in the U.S., says that Suu Kyi’s defense of the military means that support for her will likely not come from the Rohingya and other ethnic minorities in Myanmar, of which there are more than 100. “We felt betrayed,” she says. Students and young activists may work together to mobilize a response to the coup, she adds, but “It doesn’t necessarily mean we are supporting Aung San Suu Kyi personally. We are standing up for what is right for the country.”

There are some signs of resistance in the country, with reports that doctors and nurses in as many as 70 hospitals across the country are refusing to work in protest. A large youth group has also called for a campaign of civil disobedience. On Feb. 2, Yangon residents, including Kyaw Kyaw, stood at open apartment windows and walked through the streets banging on pots and pans as motorists in the streets honked their horns. Some chanted: “Long live Mother Aung San Suu Kyi!”

But activists say that COVID-19, will make it difficult for mass street protests to happen. The country has had more than 140,000 recorded cases and is battling to contain the outbreak, with restrictions limiting the size of group gatherings in place until the end of February. The history of military crackdowns also makes protesting perilous; thousands of people were arrested and as many as 200 people were killed during the suppression of 2007 demonstrations, according to advocacy groups.

“There isn’t really [any protest going on here],” Ye Yint Thu, a university student who lives in a city near the border with Thailand. “I want to participate, but if I do it alone, I might be arrested.”

“Many people, many generations” still believe Suu Kyi is “the only hope” says Thinzar Shunlei Yi, one of the country’s leading youth activists. But she says things are changing, with some young democracy supporters wanting to advance the cause without Suu Kyi and her “huge personality cult” at the helm. “We want equality leadership, we want a real democracy led by real people, not by one person or one group,” she says. “We look beyond Aung Sang Suu Kyi.”

Some long-time Myanmar watchers say no one should be writing her off just yet. “Whether in government or in prison, Aung San Suu Kyi is one of the most powerful people in the country,” says Mark Farmaner, the director of the advocacy group Burma Campaign U.K. But Kyaw Kyaw, the LGBTQ rights campaigner, says that Suu Kyi’s latest imprisonment has been a wake up call. “A lesson learned is we should not depend on a person. We should depend on a political structure.” 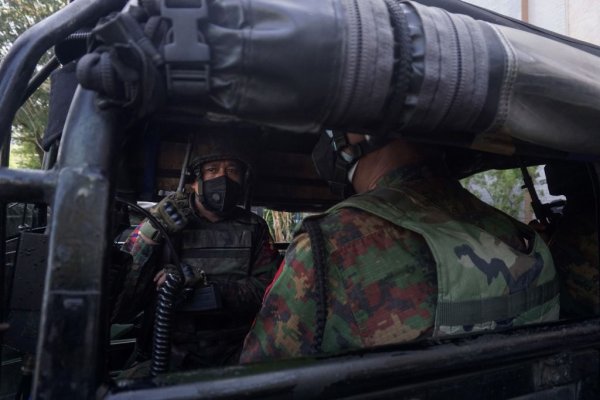 Myanmar's Military Cracks Down on Dissent Amid Coup
Next Up: Editor's Pick