In France's Official Oscar Entry Two of Us, Two Women’s Love Story Plays Like a Thriller

Martine Chevallier and Barbara Sukowa in 'Two of Us'
Photo courtesy of Magnolia Pictures.
By Stephanie Zacharek

Movies generally don’t know what to do with post-menopausal women because most of the world doesn’t know what to do with them, either. The characters written for actresses above, say, age 60—the point at which a performer might be able to play a character 10 years younger, but probably not 20—are usually limited to mothers and grandmothers, hovering around the sidelines of a story like quaint, useless embroidery. Occasionally, you get one of those films about a woman over 50 finding love later in life; these can be sweet, but not particularly gratifying. Very seldom do you see a picture that treats a “mature” women—the scare quotes are a necessity, as there’s no appealing designation—as any sort of carnal or sensual presence.

But Two of Us, directed by Filippo Meneghetti and starring two terrific veteran actors, Barbara Sukowa and Martine Chevallier, shakes up everything we think we know, or expect, from stories about women who are well past childbearing age—that is to say, that possibly imaginary sell-by date of desirability. Nina (Sukowa) and Madeleine (Chevallier) are lovers, as we see in an early scene brushed with erotic tenderness. They’re also across-the-hall neighbors in the same apartment building, located in a small French town. Madeleine, a widow who has survived an unhappy marriage, has two grown children, Frédéric (Jérôme Varanfrain) and Anne (Léa Drucker); they don’t know about her relationship with the woman across the hall, to whom they refer, with chilly deference, as Madame Dorn.

Madeleine has promised Nina she’ll explain the truth to her children, so the two women can fulfill their dream of moving to Rome together. (Madeleine will sell her nicely furnished, well-kept apartment to fund the adventure.) But in the end, she stalls; she just can’t come out to her children. She and Nina quarrel, but their tiff turns out to be the least of their problems when Madeleine suffers a stroke, and is rendered unable to speak, or clearly communicate. Nina is shut out of the secret life she and Madeleine have shared, and as she hovers about anxiously, Madeleine’s children view her first as an annoyance and eventually as a threat.

Two of Us—which is France’s official Oscar entry, and has also been nominated for a Golden Globe in the Foreign Language category—is most definitely a love story, but it’s not a cozy one. Wherever human passion is found, there’s often a fringe of obsession at the edges, and Two of Us explores that idea fearlessly. Nina, her partner locked away from her, becomes increasingly desperate. Sukowa, perhaps best known for the films she made with Rainer Werner Fassbinder, walks this knife edge deftly. Sometimes, with her daggerlike stare and take-no-prisoners carriage, she really does look deranged. Meneghetti leads us through this story with deliberate flourishes of misdirection, sometimes veering off—possibly—into full-on woman-gone-mad psychothriller territory. (The appearance of a tortie kitten might put cat lovers on edge, but rest assured, he comes to no harm, and ultimately serves a symbolic purpose.) And in some ways, Two of Us is a horror movie, but only about the sometimes unintentional monstrousness of allegedly grown-up children who are unable to accept their parents as people—people who just might have love lives, or even sex lives.

But then, Two of Us works on multiple levels: Nina’s apartment has a layout identical to Madeleine’s, but its down-at-the-heels furnishings and shabby wallpaper may well be a nod to the darker half of David Lynch’s Mulholland Dr.—you get a sense of the class differences between these two women, and you wonder how that might have shaped their relationship dynamic in some way. By the end, though, you get a clear sense of how much these women mean to one another, and why Nina feels she must protect her beloved at all costs. Both actors are marvelous to watch: Sukowa’s Nina has a magnificent, vibrating power that never fully obscures her vulnerability. And at first Chevallier’s Madeleine, in her tasteful Elieen Fisher-esque wardrobe, is the picture of a modern, financially independent older woman. Then her body betrays her, and Chevallier shifts into another mode, one of wrenching helplessness—but she’s still a woman who knows her heart. Two of Us keeps you guessing where it’s headed until the very end. But it’s not giving too much away to say that it’s about the unconscious dance steps a person takes as she moves toward the person she calls home. 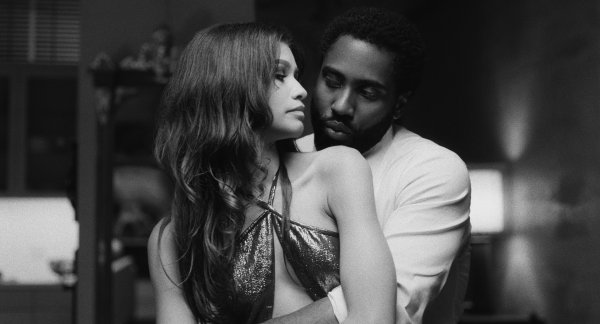 Zendaya Dazzles in the Otherwise Dull Malcolm & Marie
Next Up: Editor's Pick