If you took a census of today’s romantic leads, you’d find a demographic shift from the heyday of Tom Hanks and Meg Ryan. Like the U.S. as a whole, the population of characters in romantic comedies is getting older. A lot older.

In the last decade, there’s been a new crop of films featuring senior citizens in love, ranging in age from young retirees (Because I Said So) to much older than that (The Best Exotic Marigold Hotel). The genre has been at a simmer since around the time Jack and Diane found love in Something’s Gotta Give back in 2003, but The Second Best Exotic Marigold Hotel, which hit theaters March 6, marks a milestone. The story of retirees (Judi Dench, Bill Nighy, Maggie Smith, Richard Gere) adventuring in India is one of the first senior rom-com sequels.

Sure, there have been movies about May-December romances (As Good as It Gets), and films centered on older couples that don’t follow an obvious formula (Away From Her). What’s revolutionary is using older characters for the classic romantic comedy, complete with a happy ending and life-affirming message.

Conventional rom-coms feature boy-meets-girl stories with a few obstacles on the way to resolution, but not much compromise. In senior rom-coms, compromise is the name of the game. The characters might be starting their third act, but they’re already set in their ways and come with a literal lifetime of baggage. If the relationship is going to succeed, a love-the-one-you’re-with mentality is required.

For younger romantic leads, sex is a part of the narrative’s endpoint. For seniors, it’s a hurdle to jump. In Something’s Gotta Give, a heart attack delays the relationship’s consummation. In Hope Springs, a couple goes on a week-long retreat just so a marriage counselor can give them sexual homework assignments to get them back in the saddle.

This reflects the struggles of real-world older couples, for whom sex becomes increasingly difficult with age. Erectile dysfunction is often used as a punchline in these films, but it is indeed a major problem for older men—there’s a reason you see Viagra ads so often. Anxiety about performance can often intimidate men out of the act entirely if their partner isn’t understanding and willing to work with them. In a way, says University of Chicago sociologist Edward Laumann: “Men become more like women in their sexual needs for close contact, supportiveness in the partnership and that sort of thing. They need not to worry about performance or it just makes it worse.” Acts like hugging, holding and cuddling become more important to get the action going—just as the counselor instructs in Hope Springs.

For couples who can maintain intimacy, it really is worth it. “People who have active sex lives are much happier campers and are healthier,” Laumann says, and talking through issues is an important step on the road to resolving them. It’s no wonder, then, that Boomers would turn to movies that reflect their own intimate experiences—and could even prompt some helpful personal discussions. Debby Herbenick, an associate professor at Indiana University who studies sexual health, says she was thought that a movie like Hope Springs might have given a lot of couples a helpful starting place to talk about reviving their own sex lives.

It also makes sense that seniors would be drawn to characters who look like them, according to Herbenick. “Women particularly find that their sexual desire and arousal is challenged by not feeling very positively about their own bodies,” she says. “So if you’re an older woman who’s already not feeling great about your body, and you’re going to the movies, maybe with your partner, and all you’re seeing are young people getting naked or scantily clad, I can’t imagine that makes you feel that great.”

The formula seems to be working at the box office, where older Americans are turning out in record numbers. The original Best Exotic Marigold Hotel was a sleeper when it debuted in 2011 (older people don’t seem to care as much about opening weekends) but eventually grew to a worldwide gross of $134 million (on an estimated budget of $10 million, according to IMDB). Compare that to younger romps No Strings Attached and Friends With Benefits, both of which grossed in the same neighborhood in 2011 but had budgets double or triple the size of Marigold. It’s no wonder that the producers called a few weeks into the U.S. release to ask the writer to start on a sequel for the star-studded cast. Second Best is already performing decently, holding the #1 spot at the box office in the U.K., Australia and New Zealand and trailing only Chappie and Focus in its opening weekend in the U.S. (with especially high turnout among the over-55 set) for an $8.5-million domestic weekend gross, according to Deadline. If it follows the same trajectory as the original, the numbers are bound to grow each week.

Herbenick says having more movies that show the diverse experiences of senior citizens is a good thing, both for the viewers who recognize themselves in the aging faces of Bill Nighy and Judi Dench and for younger audiences who can learn to see the elderly as the multifaceted people they are. The icing on the cake is that these stories are usually more grounded in the real world than many of their younger counterparts. They’re about what happens after the happily ever after.

With that in mind, bring on Because I Said So Too, It’s More Complicated and Something Else Has Gotta Give. 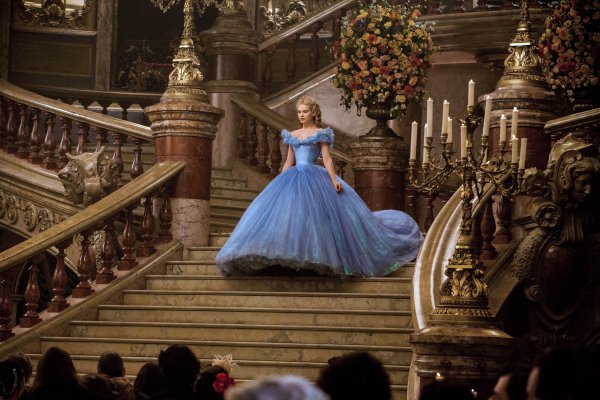 See Cinderella Through the Years
Next Up: Editor's Pick