Ladj Ly, director of 'Les Misérables,' in Montfermeil, in the eastern suburbs of Paris, on Feb. 3. "There is Paris, and there are the banlieues, and they are two worlds apart," Ly says. "We have been abandoned by the public system."
Arnau Bach for TIME
By Vivienne Walt/Paris

There’s still a few days to go before Sunday’s Academy Awards ceremony in Los Angeles. Yet at least one Oscar nominee feels he has already won big.

French director Ladj Ly, whose movie Les Misérables is one of five nominated for Best International Feature Film, says he’s astonished that his tale of racist police violence in Paris’s largely ethnic-minority banlieues, or suburbs, has found a global audience at all.

“There is Paris, and there are the banlieues, and they are two worlds apart,” Ly says, sitting in a café downstairs from his apartment in the suburb of Montfermeil on Monday. “We have been abandoned by the public system.”

Movie audiences in the U.S. might be more familiar with the glittering monuments and wrought-iron bridges of central Paris, the romantic backdrop to Oscar-winning movies like Vincente Minnelli’s Gigi or Woody Allen’s Midnight in Paris.

But it is here in Montfermeil, about 20 miles away from the city center—where Ly was raised by Malian immigrant parents in a crumbling high-rise block—that Les Misérables is set. As it happens, Victor Hugo also used the location in the iconic 1862 novel from which Ly’s movie takes its name, portraying local boy Gavroche as battling social marginalization and poverty.

Ly walks in the streets of his neighborhood in Montfermeil, in the eastern suburbs of Paris, on Feb. 3. Every scene in the film was an experience he himself lived through, Ly says.
Arnau Bach for TIME

Nearly 160 years later, those problems persist. “Poverty is still present,” Ly says. “It’s clear that there are parallels.” Montfermeil’s poverty rate is around 30%, according to government statistics. This was the site of some of the intense violence in 2005, during weeks of nationwide rioting in poor minority suburbs; the protests first erupted in the suburb next to Montfermeil, after two teenage boys died by electrocution while hiding from police.

Ly says that, like every Montfermeil child, he was deeply familiar with Hugo’s book from an early age, and that he knew even before he began working on Les Misérables, that he would title his film after France’s most famous piece of literature. It’s not an adaptation, but he does end the film with a quote on screen from Hugo’s book, which says, “There are no such things as bad plants or bad men, only bad cultivators.”

Certainly, there are no innocents in Ly’s film, whether the marginalized boys, or the racist police officer sent in to assert brutal control. Instead, the story follows a hair-trigger implosion that springs whole from isolation and an absence of hope, as well as the absence of any real authority. The community’s “leader,” such as he is, is a small-time corrupt hustler who declares himself Mayor. The actual Mayor—white, like most of the real-life mayors in the banlieues—is never seen.

Ly says that every scene in the movie was an experience he himself lived through. But he left out some of his real-life experiences, including two years that Ly spent in prison a decade ago, on charges of kidnapping, as part of an involved family dispute. He will not be drawn into talking about it, saying only, “It was an experience.”

When I question whether a child really stole a lion cub from a circus—the film’s central narrative—Ly whips out his phone to show me a photo of himself at 18, cuddling a lion cub. “My friend stole it,” he says.

The film’s final heart-stopping scene, in which local boys threaten to throw Molotov cocktails at armed police in a graffiti-ridden stairwell, suggests that the area’s desperation could either spiral into calamitous violence, or that disaster could be averted just in time. “It was important to leave that open,” Ly says. “It gave people a debate to talk about from the film.”

Asked why the film opens on the Avenue des Champs-Élysées, in the wake of France's 2018 World Cup win, Ly says, "It is a patriotic film about France."
Amazon Studios

The movie opens with a night the French will not soon forget: Their country’s victory in the FIFA World Cup in July 2018, when a million people poured onto Paris’s Avenue des Champs-Élysées for a spectacular all-night party. Among them were thousands of immigrant-origin residents from the poor banlieues—like the three boys portrayed in Ly’s film—who hopped trains to celebrate in the city.

For France’s black community, like Ly and his protagonists, that night had a particularly strong resonance: Eight of France’s 23-man World Cup squad were of African origin, including its star striker Kylian Mbappé, a child of Cameroonian and Algerian immigrants, who was born and raised in a banlieue close to Montfermeil. The boys in Les Misérables are Mbappé devotees.

When TV cameras captured President Emmanuel Macron the night of the World Cup victory, weeping as he hugged Mbappé at the medal ceremony in Moscow, it was possible to imagine France’s racial tensions melting away.

But in Les Misérables, Ly shows how illusory that sense was. Events spiral quickly during the 24 hours after the World Cup celebrations, making the contrast between ecstasy and agony that much crueler.

“It is a patriotic film about France,” Ly says, when I ask why the movie opens on the Champs-Élysées. “It is unfortunate that is only football that brings us together.”

Ly heads to the Clichy-sous-Bois neighborhood, where he directed 'Les Misérables,' on Feb. 3. The neighborhood near Paris was a flashpoint of the 2005 unrest.
Arnau Bach for TIME

In fact, Ly says he declined an invitation from Macron to come watch the movie with him in the Elysée Palace. Instead, he says, he asked the French leader to come to Montfermeil to view it there instead. The president’s security detail nixed the idea, according to Ly. So he sent Macron a DVD, after which the President told a French newspaper that the movie had “deeply moved” him, and that he had instructed his staff to accelerate plans to improve life in the suburbs.

Ly concedes that the 2005 riots did bring some changes. Some of the crumbling high-rises have been torn down, and the one Ly’s family lived in is now slated for demolition. Ly himself moved to a modern low-rise public housing building late last year.

Yet despite all that, the huge challenges in getting Les Misérables produced show Paris’s racial issues remain deeply entrenched. The movie’s two producers say they struggled to find funding from investors in Paris, who repeatedly told them that there was no commercial market for a film about racial tensions in the banlieues. That was despite the fact that the 1995 film La Haine, by Mathieu Kassovitz (who is white), on the same subject, is regarded as a classic of French cinema.

“They told us that there would not be any cinema screenings,” says producer Christophe Barral. “They said it was only for the ‘publique aux casquettes,‘” which roughly translates to “guys in baseball caps.” Barral’s co-producer Toufik Ayadi says, “That meant blacks and Arabs.”

Over lunch in Montfermeil, the two producers and Ly now laugh at that experience. Yet they say they battled to raise the tiny sum of $1.65 million that the movie ultimately cost to make—a problem they are unlikely to face with Ly’s next movie, they say.

The return on that investment has been huge. Two million cinema tickets have so far been sold in France alone, and the film is now being seen worldwide, distributed by Amazon Studios. It won the Jury Prize at the Cannes Film Festival last April, and the European Discovery award at the European Film Awards in Berlin in December. It was also nominated for a Golden Globe award and is up for an Independent Spirit award in Los Angeles, one day before the Oscars.

But Ly’s biggest moment will come this Sunday, with Hollywood’s most important film event of the year. “For a young director from the banlieues to represent France at the Oscars, it is enormous, it is a dream,” Ayadi says. “He came out of nowhere.”

Les Miserables faces steep competition on Sunday, especially from the widely-lauded Parasite from South Korean director Bong Joon-ho. But, says Ly, the very fact that he will walk the Oscars’ red carpet means “I have already won.” 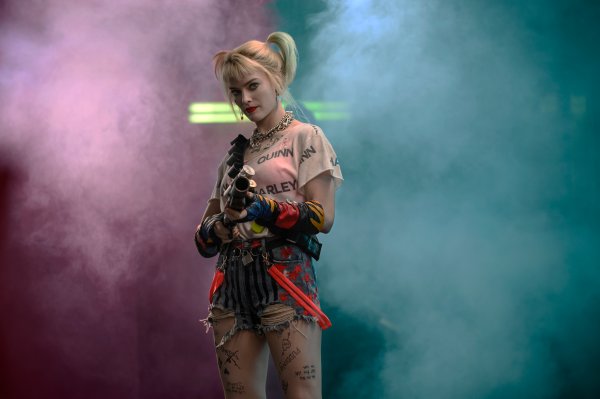 Birds of Prey Is a Candy-Colored Joy Ride, But Its Pleasures Ring Hollow
Next Up: Editor's Pick