In light of the Rohingya crisis gripping Myanmar, Amnesty International on Monday revoked its highest honor from the country’s once-lauded leader Aung San Suu Kyi after her “shameful betrayal of the values she once stood for.”

“As an Amnesty International Ambassador of Conscience, our expectation was that you would continue to use your moral authority to speak out against injustice wherever you saw it, not least within Myanmar itself,” wrote Kumi Naidoo, Amnesty’s Secretary General.

“Today, we are profoundly dismayed that you no longer represent a symbol of hope, courage, and the undying defense of human rights,” he added.

Suu Kyi was originally awarded Amnesty International’s Ambassador of Conscience in 2009 for her peaceful and non-violent struggle for democracy and human rights in Myanmar. But since she became Myanmar’s de-facto leader in 2016, the memo says her government has been “actively involved in the commission or perpetuation of multiple human rights violations.”

The report specifically refers to Suu Kyi’s handling of the Rohingya crisis, a military-driven campaign which U.N. investigators have said bears the hallmarks of genocide. Brutal, army-led crackdowns drove more than 700,000 members of the persecuted and mostly stateless Muslim minority from their homes in Myanmar’s northern Rakhine state and into neighboring Bangladesh since August 2017. Despite the allegations of military atrocities, including rape, arson and extrajudicial killings, Suu Kyi has said she continues to stand firm with the military.

Amnesty’s memo also denounced Suu Kyi for defending repressive laws that have eroded Myanmar’s freedom of expression, including her backing of the conviction of two Reuters journalists who were investigating a Rohingya massacre.

“We will continue to fight for justice and human rights in Myanmar – with or without her support,” Amnesty said.

Amnesty is the latest group to withdraw an award from Suu Kyi, who also earned a Nobel Peace Prize for her years as a political prisoner under Myanmar’s then-ruling junta. She also recently lost the Holocaust Museum’s Elie Wiesel Award, and the freedoms of the cities of Dublin, London and Oxford have all been revoked. 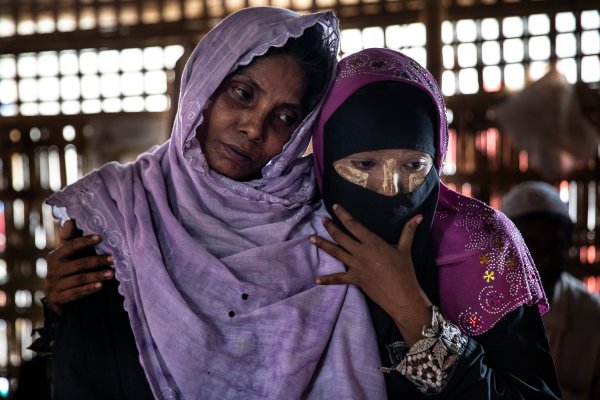