The Trump Administration is considering limiting U.S. ties with Myanmar’s military in response to its recent violence against the country’s Rohingya Muslims, a White House official tells TIME.

In the past three weeks, more than 420,000 Rohingya Muslims, an ethnic minority group, have fled their homes in Myanmar, also known as Burma, in what the United Nations human rights chief has called “a textbook example of ethnic cleansing.”

“Until Burma’s security forces act in accordance with the rule of law and stop the violence and displacement, moving forward with such engagement will be difficult,” a National Security Council spokesperson tells TIME.

The conflict in Myanmar erupted on Aug. 25, after a militant Muslim group attacked army security posts in the country’s west coast state of Rakhine. Myanmar’s army responded in apparent retaliation, and refugees have told aid workers that the military had set fire to their homes and planted land mines along their escape routes.

The White House and the State Department have called for Myanmar’s security forces to end the violence against civilians. They have also asked for the government and the army to facilitate humanitarian aid for displaced persons.

The de facto leader of the country’s civilian government, Nobel laureate Aung San Suu Kyi, claims military operations in Rakhine ended on Sept. 5. Human rights groups say they are ongoing. The NSC spokesperson also suggested that the violence is continuing. “We will continue to call for the Burmese security forces to immediately end the violence against civilians,” the spokesperson told TIME on Sept. 19.

Myanmar’s army wields enormous power in the country, despite recent democratic reforms after the military rule the country for half a century. Myanmar’s constitution guarantees the army 25% of seats the parliament and veto power over any constitutional change. The army also controls three key ministries: Defense, Home Affairs and Border Affairs.

Formal assistance to Myanmar’s military remains illegal in the U.S., including the sale of U.S. military equipment and participation in the U.S. International Military Education and Training program.

But prior to this crisis, U.S. and Myanmar military-to-military engagement has been “nascent,” the NSC spokesperson says.

“Any such engagement now, particularly at a high level, would be just terrible in terms of the message it sends,” says Tom Malinowski, former Assistant Secretary of State for Democracy, Human Rights, and Labor under Obama.

The U.S. Congress is also reevaluating its relationship with Myanmar’s military and with Suu Kyi’s government. Last week, the Senate Armed Services Committee struck language from the National Defense Authorization Act that would have increased military-to-military engagement with Myanmar. “The Burmese government and military are moving in the wrong direction and I hope this action sends a strong message to Naypidaw,” said Republican Senator Cory Gardner of Colorado, who supported the decision.

Senator Dianne Feinstein, Democrat of California, wants to go even farther. “At the very least, the leaders who planned and executed this campaign of ethnic cleansing should be sanctioned, all military-to-military contact should be suspended and preferential trade benefits with Burma should be ended,” Feinstein says.

Some human rights leaders also want the increased action against Myanmar’s army. “If you say, what would it take to stop the Burmese military, it would be some set of targeted sanctions, whether that is targeting their business interests, targeting senior members of the military, baring them from travel, seizing their bank accounts, stopping arms flows to Burma,” says Kenneth Roth, executive director of Human Rights Watch. 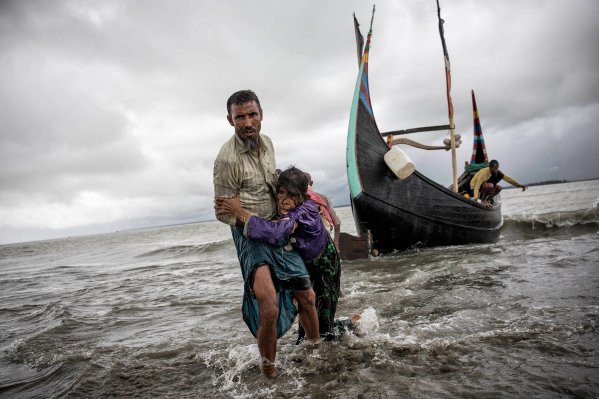 Will the Rohingya Exodus Be Aung San Suu Kyi's Fall From Grace?
Next Up: Editor's Pick