'White Supremacy in Action.' Activists Who Protested at the Capitol in the Past Slam Light Police Treatment of the Pro-Trump Mob

Nida Allam remembers hearing the backs of protesters thudding as they were dragged away from the Senate viewing chamber by law enforcement in 2018 during Brett Kavanaugh’s heated Senate confirmation hearing. Some activists—mostly women—were “tackled to the ground by male police officers who were two to three times their size,” says Allam, who is Muslim and a newly elected county commissioner in Durham, N.C.

Six activists who have protested peacefully at the U.S. Capitol for a variety of causes tell TIME they saw a stark, but unsurprising, disparity in the law enforcement response they experienced and the restrained response doled out to the pro-Trump mob that swarmed the seat of national legislative power on Wednesday.

“It was white supremacy in action: that they stormed the Capitol in order to halt a constitutionally mandated process because they wanted to change things, knowing that nothing would happen to them… Their whiteness protected them,” says Anita Cameron, a veteran Black disability rights activist who has been arrested dozens of times for protesting at the U.S. Capitol. Cameron even participated in the Capitol Crawl in 1990 in which more than 1,000 people marched from the White House to the Capitol building to urge Congress to pass the Americans with Disabilities Act. Once at the Capitol, a few dozen crawled up the Capitol steps without their wheelchairs, crutches and other walking aids. She says she was one of more than 100 members of the grassroots disability rights network ADAPT who were arrested after doing so.

She says if this week’s insurrection had been staged by Black people, “the streets would be running with blood” and they wouldn’t have even made it inside the Capitol.

Wednesday’s events have increased scrutiny around the question of who is allowed to feel safe on Capitol grounds. For some, the attack on the Capitol has reinforced the idea that Black people are more likely to be viewed as a threat than white people by law enforcement. Across the nation, Black Lives Matter protests have frequently, and publicly, been met with a heavy-handed response that has included tear gas, pellet guns and officers decked in heavy gear. It was a different story when white Trump supporters descended on the U.S. Capitol on the day that lawmakers met to certify the Electoral College vote and Democrats won control of the Senate after Georgia’s Senate seats flipped.

The U.S. Capitol Police has come under fire for the disastrous breach into the building and not taking the threat of white supremacy seriously; their chief Steven Sund has said he will resign after Wednesday’s riots. They did not respond to a request to comment from TIME.

Many in the pro-Trump mob appeared to walk freely after causing havoc in the Capitol. In one video an officer appeared to hold a door open for those exiting. When Cameron protests, she says she and those around her are frequently arrested before leaving the premises. She says she has probably been arrested upwards of 100 times while protesting at the Capitol. As of this writing, U.S. Capitol Police have said that more than 80 people have been arrested in connection to Wednesday’s insurrection.

Allam also felt unwelcome when she was at the Capitol in 2018 for the Kavanaugh hearings. At the time, one officer approached Allam’s husband, saying “if you look at me one more time, you’re threatening an officer of law” and that he would throw them both out of the premises, she says. After they complained to another officer, they were told that “I understand where he’s coming from because, you know, I was in the army and you’re really intimidating looking because you look like the people that we were fighting back in the Middle East.”

During the same visit, Allam was wearing a sweatshirt that said Bernie Sanders in Arabic. Capitol staff asked her to go into a closet and flip the sweatshirt inside out, then she says they told her she can’t wear it because it is controversial.

Allam says Wednesday’s events have made her wonder about what Republicans consider is “the right way to protest.”

“Conservatives and the right wing have always said that the BLM movement, Women’s March and other organizations don’t protest the right way. Is this what they consider the right way?” she says.

Stephanie Woodward, an attorney and co-founder of Disability EmpowHer Network, also wants to know the answer to that question. In 2017, Woodward got out of her wheelchair inside Senate Majority Leader Mitch McConnell’s office as part of a “die-in” while protesting against significant cuts to Medicaid and their impact on disability rights. Capitol police initially put her back in her wheelchair and Woodward says she could have been pushed outside the building. Instead, about half a dozen officers lifted her out of her wheelchair and left her on the sidewalk outside the building “where they knew (she) would not be able to move because they took (her) wheelchair away from her,” she says.

Stephanie Woodward, who has spina bifida and uses a wheelchair, is removed from a sit-in at Senate Majority Leader Mitch McConnell's office as she and other disability rights advocates protest proposed funding caps to Medicaid, on Capitol Hill on June 22, 2017.
Jacquelyn Martin—AP

It took about 20 minutes for Woodward to get her wheelchair back; she says officers were using it to wheel other protesters who were not wheelchair users out of the building.

For Woodward, the disparity in response between her experience and the one shown on Wednesday “sends a really strong message.”

“If you’re a white-able bodied person that is inciting violence, the Capitol police is OK with you; if you are a peaceful protester trying to create positive change in our country, you will be met with violence,” she says.

When Woodward viewed footage of how law enforcement was treating the pro-Trump mob, she thought: “The Capitol Police never treated us like this. Why? Why are they getting VIP passes when we get dragged out?”

Health care activist Ady Barkan has previously been arrested at least half a dozen times at the Capitol while protesting primarily about health care. Barkan said in a statement emailed to TIME that he and fellow activists were arrested for peaceful protests while “the rioters (Wednesday) were allowed to walk free.”

“I was outraged that the Capitol police allowed the breach to happen,” Barkan said. “The police are never unprepared or overwhelmed by Black protesters. But, what with days of notice, they allowed these insurrectionists to ransack the Capitol and terrorize our elected officials.”

Some Black activists are frustrated that the mob’s rampage in the Capitol has taken the spotlight away from the success of a coalition of multicultural and particularly Black women-led voting rights organizations in Georgia that helped cement victory for Democrats. “It feels as if this insurrection and this white supremacist moment overshadowed that and I don’t think that’s fair,” says Monica Simpson, executive director of the national Southern-based SisterSong Women of Color Reproductive Justice Collective, adding that it’s important to know that “the people are winning” even if their victories may make “some people really upset.”

“The police come all the time for us in droves even though we’re totally non violent,” Cameron says. “They drive us out of our wheelchairs—all kinds of stuff—they’re often not very kind to us. No cop has ever taken a selfie with me. They’re not very chummy with us.”

For many people of color, choosing to protest at the Capitol is not a decision they take lightly. Simpson has long protested at the Capitol for reproductive justice, gender-based violence and other causes. She often wonders on those occasions whether this is the day she will be going to jail or get hurt. “Every person that stepped on those grounds has felt that feeling. The Capitol Police are very intimidating,” Simpson says. “Any law enforcement to a person of color in this country is intimidating because you never know what’s going to be on the other side of that interaction.” To prepare, she said she often makes sure she has called family members, particularly her mother, incase she is arrested or harmed.

US Capitol Police arrest a protestor as Judge Brett Kavanaugh testifies during the second day of his US Senate Judiciary Committee confirmation hearing to be an Associate Justice on the US Supreme Court, on Capitol Hill in Washington, DC, September 5, 2018.
Andrew Caballero—AFP/Getty Images

“Whenever my folks go to the Capitol—whenever we are there fighting and using our voice for social justice issues for our communities—we are met with incredible amounts of arrests, tear gas, anything to let us know we are not welcome,” Simpson says. “That is not what we saw on our television screens yesterday. What we saw were people being helped down stairs, we saw people getting selfies taken, a completely different welcoming response.”

Ash-Lee Woodard Henderson is a Movement for Black Lives activist and co-executive director of the Highlander Research and Education Center, which had its administrative offices burned down in 2019, likely by white supremacists. Henderson has been at several protests at the Capitol demonstrating for everything from environmental issues in central Appalachia to Kavanaugh’s nomination to the Supreme Court. Henderson, who is Black and lives in Tennessee, says she has never felt at home in the Capitol building though. “Even if I wear a suit, my hair gives me away,” she says.

Henderson finds it hard to believe that law enforcement didn’t see this coming. She points to the warning signs: white supremacists descending on Charlottesville after they passed a reparations package, Black churches burning in Louisiana and Trump himself calling on his supporters to head to the Capitol among them.

History shows that when social justice movements—particularly those led by Black people—are winning, there has always been a white supremacist backlash, she says, pointing out how the 1877 compromise halted reconstruction.

“At the end of the day, I don’t feel discouraged. I feel pissed off. I feel triggered as a person who survived a white supremacist attack,” Henderson says. “What sense does it make that a white supremacist with a gun gets more access to the Capitol than me? It’s just. It’s mind blowing but to be real, it’s also very much the American way.”

With reporting by Abigail Abrams 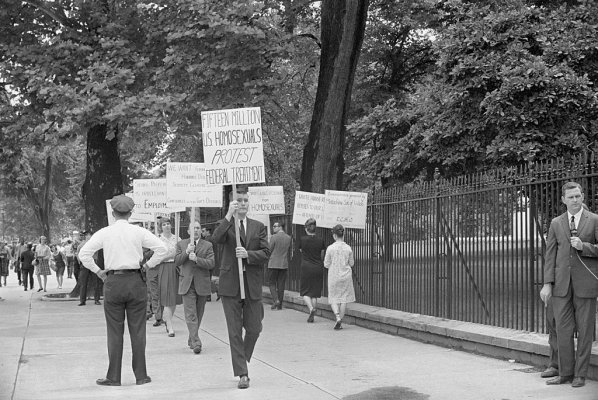 The Anti-Gay 'Lavender Scare' Not Taught in Schools
Next Up: Editor's Pick