Pro-democracy activists (left to right) Agnes Chow, Ivan Lam and Joshua Wong speak to the media after arriving for their trial at West Kowloon Magistrates Court in Hong Kong on Nov. 23, 2020, on unauthorized assembly charges in relation to protests in 2019.
Peter Parks–AFP/Getty Images
By Michael Zennie / Hong Kong

Fellow activists Agnes Chow and Ivan Lam were also remanded to custody after pleading guilty. All three will be sentenced Dec. 2.

Wong, who has been arrested multiple times and was last jailed for two months in 2019 for contempt of court, was characteristically defiant in a statement prior to his court hearing.

“It is the least ridiculous outcome among others that happened recently in Hong Kong,” he said. “In the past 3 weeks, a total of 23 activists, journalists and [legislative] councillors came under arrest. Everyday we have activists standing in trials, protestors sent to jail.”

Wong, who faces a maximum sentence of three years, called the charges he faced “minimal” compared to the penalties he said other activists could receive.

The 24-year-old was arrested in September on charges related to a June 21, 2019 siege of Hong Kong Police Headquarters in the Wan Chai district of the city. Thousands of protesters had gathered outside the police station, blocking exits, throwing eggs and vandalizing the exterior to protest what they said was excessive police force during earlier protests.

Wong admitted to organizing and inciting others to take part in the illegal assembly. The protest was near the start of a summer of unrest over the Hong Kong government proposing a now-withdrawn law that would have allowed extradition to mainland China.

Wong rose to prominence as a leader of the 2014 “Umbrella Revolution.” During the 2019 protests, he became one of the most recognizable pro-democracy leaders outside Hong Kong—traveling to capitals around the world to make his case for the movement.

Wong’s arrest is part of a wide-ranging crackdown on dissent in the semi-autonomous Chinese territory that began after Beijing imposed a sweeping national security law in response to 2019’s pro-democracy protests. Wong was not charged under the security law, which bans secession, sedition, terrorism and foreign interference.

In recent months, Hong Kong authorities have arrested the billionaire owner of one of the city’s most popular newspapers, an investigative journalist with public broadcaster RTHK and eight pro-democracy members of the city’s Legislative Council). Four pro-democracy lawmakers were also expelled for allegedly endangering national security, causing the rest of the opposition camp to resign en masse. 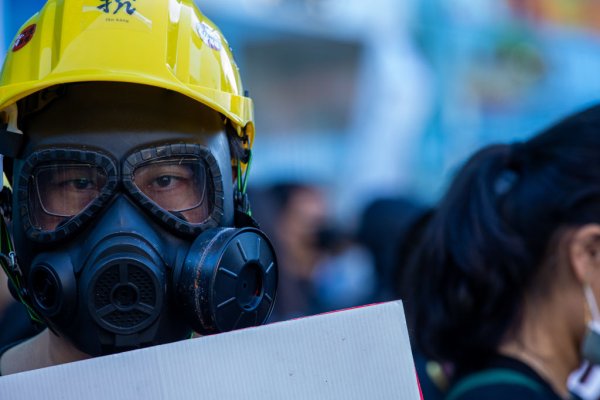 What Is the Future of Hong Kong's Democracy Movement?
Next Up: Editor's Pick