A day of mostly peaceful protests in Hong Kong turned ugly Friday as crowds laid siege to the city’s police headquarters, barricading officers inside, plastering the building with slogans and pelting it with eggs and other objects as they demanded that officials apologize for the force’s handling of a demonstration last week.

During the late morning, thousands of black-clad demonstrators marched on the building and encircled it, setting up barricades across adjoining roads. Police appeared to be taken by surprise and retreated into the headquarters complex after attempts at negotiations failed.

By nightfall, hundreds of protesters, many in protective gear, began to surge forward as if making to storm the building, defying police warnings and appeals from legislators to remain calm.

The blockade follows a day in which protesters occupied major thoroughfares, government offices and law courts, forcing their closure.

Protesters are furious with the police over what Amnesty International alleged was “unlawful use of force by police against peaceful protesters” in a June 12 crackdown, during which police fired tear gas and rubber bullets. The clashes left more than 80 wounded. The crowds outside the headquarters complex are demanding an investigation into the police’s handling of the disturbances as well as the release of all those arrested.

That protest, and two massive marches on June 9 and June 16, were held to voice opposition to a controversial bill that for the first time would allow extradition to mainland China—a law that Hongkongers fear would allow Beijing to apprehend its many critics and political opponents in the former British colony.

But the demonstrations have since morphed into a broader push for political freedom and a direct challenge to China’s sovereignty. Protesters carry banners reading “Hong Kong is not China” and wave the Union Jack alongside Hong Kong’s old colonial flag.

By 9:00 p.m. local time, the crowd outside the headquarters complex had swelled considerably and chanted “Dead cops,” “Apologize!” and “No extradition to China!”

Local media reported that riot police were assembling in neighboring locations and ready to move in to clear the streets. But demonstrators appeared undeterred. One waved the colonial flag from atop a barricade as others passed ironing boards to the front for their comrades to use as shields.

Well-known democracy activist Joshua Wong, who was only released from prison two days previously, called for a minute’s silence for Marco Leung—a 35-year-old who died on June 16 after hanging a protest banner from the side of a shopping mall.

Popular legislator Roy Kwong then appealed for calm, saying “We just contacted Marco Leung’s parents. No matter how many times I say it, I still want to cry. His father hopes everyone can return home safely. If there’s any danger, we’ll leave and we can come back. I really don’t want anyone to get hurt.” 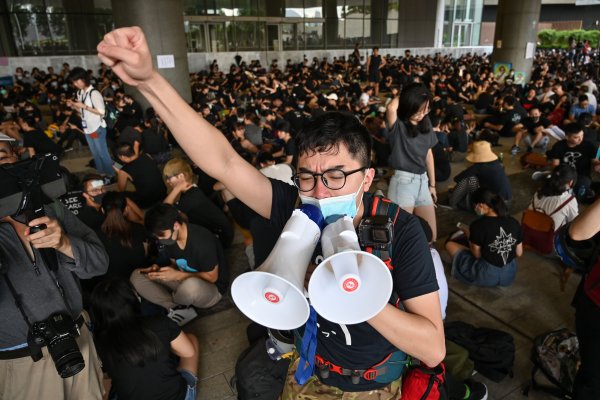 Protesters Return to Hong Kong Streets as Struggle Broadens
Next Up: Editor's Pick