Electoral officials check the body temperature of voters and distribute gloves as voters enters into a polling station to cast their ballot during the last phase of Bihar state assembly elections on November 7, 2020.
Photo by DIPTENDU DUTTA/AFP via Getty Images
By Billy Perrigo

Exit polls from Bihar, India’s poorest state, with a population of 124 million people, had predicted the BJP and its local coalition partner would lose control of the state government. Instead, the BJP unexpectedly won enough seats to form a government—and to overtake its coalition partner Janata Dal (United), or JD(U), to become the dominant party in the state.

It’s a rare win for a national party in Bihar. For three decades, regional parties seeking to appeal to specific groups based on caste have dominated in the state. (Bihar has a large population of oppressed castes.) Some analysts say the result shows the BJP’s Hindu nationalist (or Hindutva) message is now strong enough to overcome even local concerns over caste and political patronage. “This is huge for the BJP for a variety of reasons,” says Subir Sinha, a senior lecturer in Institutions and Development at SOAS, University of London. “Bihar has not been an easy state for a Hindutva message to swamp other kinds of messages.”

Read More: How the Pandemic is Reshaping India

India’s federal government deals with topics of national concern, while 28 state governments hold powers like some taxation and distributing social welfare. Although the BJP has been dominant at the federal level since coming to power in 2014, it has commanded less support in state elections. Of the 18 state elections held since 2018, the BJP has won the most seats in only six, and governs as a junior partner in ruling coalitions in four more.

As votes were being counted on Tuesday, celebratory crowds gathered with drums at the JD(U) headquarters in Patna, Bihar’s capital. But their party’s leader, Nitish Kumar, appeared set to return to his role as the state’s Chief Minister only with the blessing of the newly empowered BJP.

How important was COVID-19 in the Bihar election?

The Bihar election was India’s first state contest since the beginning of the COVID-19 pandemic, and the campaign was defined by both the virus and the economic fallout.

Bihar has the worst doctor-population ratio in the country, with only one doctor serving 28,391 people, and anxieties around the virus played a big part in the debate. During the election campaign, the BJP came under fire when it promised to provide a free COVID-19 vaccine to everyone in Bihar if elected. Critics said the pledge politicized India’s public health system when the country was at the height of its COVID-19 crisis, and that the BJP was abusing its position of power in the central government to make promises at the state level.

The economic downturn due to the pandemic perhaps played a bigger part. In the three months between March and June, India’s economy contracted by 23.9%. India’s nationwide COVID-19 lockdown, imposed in March by Modi with less than four hours’ warning, had a devastating effect on the country’s internal migrants, who work menial jobs in cities and send cash back to their families in their villages. Many of these workers originally come from Bihar, and were forced to return—some on foot for hundreds of miles—when employment dried up in India’s largest cities.

Voters queue up to cast their ballots during the last phase of Bihar state assembly elections at a polling station on November 7, 2020.
Diptendu Dutta–AFP/Getty Images

Rather than blaming Modi for the chaos of the lockdown and ensuing economic crisis, it appears many voters instead blamed Kumar, the chief minister of Bihar since 2005, and the leader of the state. At one rally, an angry onlooker threw an onion at Kumar while he spoke about his record on job creation.

“In all of our polling data, Modi and the BJP are not taking a hit because of the lockdown,” says Neelanjan Sircar, a senior visiting fellow at the Centre for Policy Research, a New Delhi think tank that has been monitoring the Bihar election. “People are angry about the lockdown and jobs, but they’re angry with Nitish Kumar and not with Modi.”

What does the Bihar election mean for Indian politics?

The Indian constitution of 1950 outlawed discrimination against Dalits, the most oppressed caste formerly known as “untouchables,” and reserved a certain number of government jobs for them in a form of affirmative action, in an attempt to undo socioeconomic inequalities.

In the 1990s the government brought in a similar system for so-called “other backward” castes who are higher in the hierarchy than Dalits but still suffer from inequality. India does not collect up-to-date data on caste, but backward castes are thought to make up a majority of the population in Bihar and several other states.

Because of this, politics in Bihar have long revolved around voters supporting leaders of a similar caste to themselves, partly in response to their messages of social liberation, but also partly in return for promises of government jobs and other benefits.

This presented a challenge for the BJP, which has long had a reputation as a party of dominant-caste Hindus, not just in Bihar, but in other states with large oppressed-caste populations where similar caste-based politics became the norm.

Read more: As India’s Constitution Turns 70, Opposing Sides Fight to Claim Its Author as One of Their Own

Victory in Bihar represents a breakthrough for the BJP, an indication that Hindu nationalism can beat caste-based parties and convince voters of oppressed castes to put their Hindu identity above their caste for the first time. Part of this change may come from the fact that Modi himself comes from a historically oppressed caste.

Another reason, analysts say, is the BJP’s organizing capability and messaging, which have allowed them to largely avoid blame in the face of a national crisis. “It says something about the extraordinary political machinery the BJP has,” says Sircar. “Their messaging directly to the voter is so good that even under extreme disruption, they can say: This is genuinely for your country, and we understand you’ve sacrificed a lot, but imagine where this country would be if you hadn’t sacrificed this. It is a triumph of the patterns of communication the BJP has developed with the citizenry as a whole.”

Shrewd leadership is also key. Ahead of the Bihar elections, the BJP struck a deal with a party that represents Dalit voters, which agreed to run only in seats where the BJP didn’t have a candidate. Analysts say this likely split the JD(U)’s vote.

What were the main issues in the Bihar election?

The 2020 election was the first in Bihar in decades where caste was not the defining issue for any of the major parties. “In a state where caste is often seen as being decisive in elections, all the parties played down caste,” Sinha says.

At rallies in the state, Modi followed his party’s tried-and-tested Hindu nationalist message, speaking of the BJP’s successes including the symbolic construction of a temple in a neighboring state, on the site of a mosque demolished by Hindu nationalists in 1992, where Hindus believe the deity Ram was born. Modi also appealed to national rivalries, mentioning India revoking the constitutional semi-autonomy of Kashmir, a region claimed by its rival Pakistan, and recent clashes between Indian and Chinese troops in the Himalayas.

By contrast, the opposition made jobs for young people its key message. Tejashwi Yadav, the leader of the Rashtriya Janata Dal, the main opposition party, drew huge crowds to his rallies by promising Bihar’s young people 1 million government jobs if elected to power, tapping into widespread economic frustration in the state. It was a far cry from the more combative message espoused by his father, Lalu Prasad Yadav, who governed Bihar for seven years in the 1990s preaching a message of empowering people belonging to historically oppressed castes.

The BJP and its coalition partner JD(U) countered this messaging by linking Tejashwi Yadav to his father, who is currently in jail on corruption charges—saying electing Yadav would continue promote a “jungle raj,” or era of misrule. While Yadav’s RJD won one more seat than the BJP, its coalition partners including the Indian National Congress (the country’s main opposition party) did not win enough to form a coalition government.

Still, analysts warn the BJP’s victory may not mean caste-based politics are gone forever. “The very close election, and the wafer-thin margins (as low as 12 votes in one constituency, for example) show that the narrative of development vs. caste politics is a false one,” says Dhrubo Jyoti, a journalist at the Hindustan Times, who covered the election. “The aspirations and mobilization of marginalized castes will continue to remain important in Bihar.”

The BJP may have the COVID-19 health and economic crisis to thank for the upset. “This may not be an enduring trend, but in the face of an economic and public health catastrophe, all parties needed to have votes from all castes,” says Sinha, the SOAS lecturer. “But it’s an interesting trend, that you can have politics in poor states like Bihar that are not entirely based on caste. Appeals that go above and beyond caste can have a major impact.” 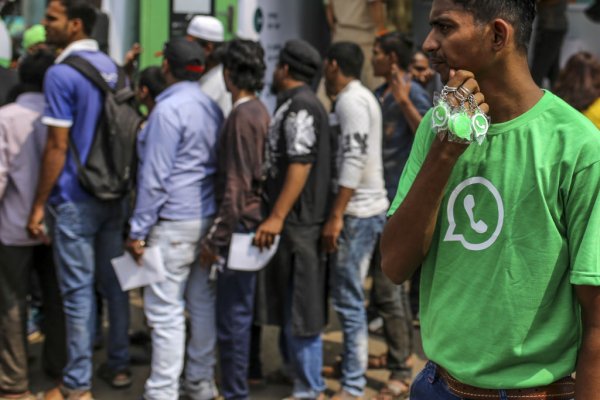 Facebook Gets Green Light for Whatsapp Payments in India
Next Up: Editor's Pick