Trump Is Offering to Mediate in the India-China Border Dispute. Here's What to Know About the Escalating Tensions

As precursors to possible nuclear war go, fistfights and stone throwing aren’t exactly the first things that come to mind.

But along India and China’s long, contested border, that’s exactly what has been happening for the past month, prompting President Trump on Wednesday to offer to mediate what he called a “now raging dispute” between Asia’s two major military powers.

Tensions along the 2,000 mile stretch have been high for decades, with the Indian government reporting more than 1,000 mostly minor incursions by Chinese troops between 2016-18. But hostilities have increased over the last several weeks following large Chinese troop movements into previously Indian-controlled territory.

Here’s what to know about the rising tensions between the world’s two most populous countries.

Up to 10,000 Chinese troops, equipped with vehicles and tents, are reportedly stationed in Ladakh, close to where India, China and Pakistan meet, having crossed the “line of actual control” between the two nations in early May. In the last few weeks, there have been two clashes, one on May 5, in Ladakh, and another on May 9, more than 1,000 miles away, close to India’s eastern border with China and Bhutan.

Both sides appear to have so far kept to an informal agreement where weapons aren’t used in clashes, designed to prevent escalation. But several soldiers from both sides have been injured, including senior officers, according to reports, though none have died.

Tensions increased further on Tuesday, with satellite photos published by Indian station NDTV purportedly showing Chinese building an expansion to a nearby air base, and fighter jets on the tarmac. On the same day, Chinese President Xi Jinping announced the country was stepping up its preparedness for military conflict—though it’s unclear whether this was a reference to India or rather rising concerns over Hong Kong and the coronavirus pandemic. Meanwhile, Indian Prime Minister Narendra Modi held a high-level meeting with defense officials to discuss the situation.

What’s the history of the tensions between India and China?

The borders of India and China, which were both established in their modern form in the 1940s, reflect those drawn by British Colonialists. At times, both countries have felt uneasy and defensive about these borders, especially the high and inhospitable stretches in the Himalayas.

The two countries went to war in 1962 over the boundary between Ladakh and Aksai Chin, which both claim but is controlled by China. The result was a humiliating defeat for India, which lost more than 1,300 of its soldiers. But the war did little to shift the location of the “line of actual control,” the term that has come to describe the military realities on the ground. No Indian soldiers have been killed on the boundary since 1975, thanks to efforts by the two nations to guard against escalation.

But tensions have still occasionally flared between the two nuclear-armed states. The last time the two sides had a major confrontation at the border was in 2017, when Indian troops moved into Bhutan, a small kingdom sandwiched between the two powers, to stop China building a road that India believed would alter the strategic balance of the area.

Why are the two clashing again now?

This latest incursion could be in response to India’s construction of a bridge close to the line of actual control in Ladakh, which could be seen as a retaliation in kind for India’s move into Bhutan in 2017, says Ayushman Kaul, a South Asia research assistant at the Atlantic Council, a think tank.

“China constituted this as an attempt by India to change the status quo,” Kaul says. “This stemmed from the 2017 exchange, where India applied the same argument to China, saying China’s construction of a road upended the status quo in the region. It’s basically saying OK, if you’re going to do that, we’re going to do this.”

There has also been speculation in the Indian media that China’s move is an attempt to divert attention away from its role in facilitating the spread of COVID-19 around the world.

In any case, Kaul says, the inclusion of military hardware makes this incursion the most significant in a long time. “It’s not just that China has crossed over, but they’ve deployed tents and heavy vehicles,” he tells TIME. “It’s a change from the previous behavior we’ve seen on the border.”

Yet the heart of the matter is never a single road or bridge. “The land China and India are fighting over is an arid plateau,” says Kerry Brown, director of the Lau China Institute at King’s College London. “But it’s about much more than territory. It’s symptomatic of this much deeper strategic clash between the two. It’s part of enormous unresolved tensions between a very aspiring China, which believes its Asian century is here, and an India which also feels it has a massive role.”

What’s likely to happen next?

Amid the coronavirus pandemic and the ongoing risks the disease still poses, leaders of both countries will probably want to avoid the situation getting out of control, experts say. “I suspect that the escalation will probably be contained,” says Steve Tsang, the director of the China Institute at SOAS, University of London. “I don’t think either government wants to engage in a military conflict with the other. But neither government wants to be seen as backing down, either.”

One problem, experts say, is that with nationalist strongmen leading both countries, the situation is more volatile than usual. “What you have is essentially two very nationalistic administrations under Xi and Modi,” says Tsang. “The Indians in particular are sensitive about the border with China, and the Chinese don’t take the Indians sufficiently seriously to give the Indians proper respect. So the base atmosphere is very bad for both sides.”

The incentive for soldiers to back down in face-to-face situations is also dangerously low, according to Brown. “For the people ordering the troops, there is no reward for holding back,” he says. “The slightest infringement means they have to do the maximum, because if they don’t they’ll be labeled as traitors. There is no space for nuance.” 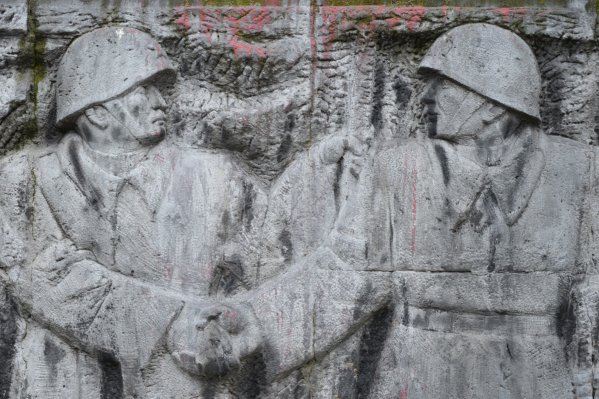 The Enduring Fight Over the Memory of WWII
Next Up: Editor's Pick