India’s Narendra Modi Broke Ground on a Controversial Temple of Ram. Here’s Why It Matters

The groundbreaking for the Hindu temple of Ram in Ayodhya, India was always going to be fraught.

It is the site of years of conflict between Hindus and Muslims. Hindus believe it is the birthplace of Lord Ram, a prominent deity. For Muslims in India, it is the site of a 16th century mosque that was demolished by a mob in 1992, sparking sectarian riots that led to some 2,000 deaths.

Indian Prime Minister Narendra Modi elevated the significance even further by attending the ceremony and laying the foundation for the temple on Wednesday. Many other members of his Hindu nationalist Bharatiya Janata Party (BJP) were also present. It caps a long running saga that has been at the heart of religious tensions in the world’s largest democracy.

“This temple will symbolize the determination and collective resolution of millions of Indians,” Modi said at the ceremony. “For those who have devoted their lives to this cause, this day is as significant as the day India gained independence.”

The Ayodhya dispute played a significant role in helping the BJP rise to power. The promise to build a temple on the site has been the party’s rallying cry since the 1980s. With the groundbreaking ceremony, Modi delivers on a core campaign promise to his Hindu nationalist base. The event also coincides with the first anniversary of the BJP-controlled parliament revoking special self-governance for Muslim-majority Jammu and Kashmir — another key election promise.

“The message is a clear one: here is a day which should be celebrated as the day BJP fulfilled two of its core promises,” says Sanjay Kumar, director of New Delhi based think-tank Center for the Study of Developing Societies. “The fact that no opposition leaders have raised their voice against this event being held in the middle of a pandemic shows how powerful the BJP has become.”

The ceremony comes as Modi struggles to deal with the fastest-growing COVID-19 outbreak in the world, an ailing economy and border tensions with China. India has some 1.9 million confirmed COVID-19 cases—third highest in the world, after the U.S. and Brazil. Local media reports that strict COVID-19 protocols have been put in place in Ayodhya for the event.

What is the controversy surrounding the Ayodhya site?

The conflict over the site dates back to the 1500s when Muslim Mughal Emperor Babur ordered the construction of a mosque in Ayodhya, which is believed by Hindus to be the holy site where Lord Ram was born. Many Hindus claim that the mosque, Babri Masjid, was constructed over a temple devoted to Ram. Violence between Hindus and Muslims has been recorded at the site as far back as 1853.

In the 1980s, the issue was brought back to national attention by a Hindu nationalist group and supported by the then-incipient BJP. In 1990, BJP leaders campaigned for the reclamation of the land and the construction of a temple in the same spot where the mosque stood.

On Dec. 6, 1992, a rampaging mob of Hindu nationalists demolished the mosque triggering nationwide riots. In 1993, retaliatory bombings in the country’s financial capital Mumbai (then Bombay) killed more than 200 people.

The construction of the temple at the site follows a verdict from India’s supreme court in November 2019 that ended the legal battle over the site and allowed the temple to be built.

What is Modi’s role in the controversy?

The decades-long dispute over the site tracks the rise of Hindu nationalism espoused by the BJP, which came to power nationally with Modi’s 2014 election as prime minister. The temple construction campaign has been continuously incorporated into the party’s election manifesto since 1996.

Historians and academics often cite the 1992 mosque demolition and the ensuing riots as defining moments in India’s modern history. They are also believed to have kickstarted the rise of the current religious identity politics that still dominate the country. Modi himself, then a junior party member, was one of the organizers of a political and religious rally in 1990 to champion for the construction of a temple on the site of the mosque.

“The systematic push for political power by the Hindu right-wing would not have advanced without the ground prepared by the Ayodhya movement,” says Zoya Hasan, a political scientist and professor emeritus at Jawaharlal Nehru University in New Delhi. “It has contributed to India’s foundational shift from a pluralist democracy to majoritarian rule.”

Ever since Modi’s election in 2014, hardliners in the BJP have been pushing for an agenda that would establish Hindu supremacy in a country that was envisioned by its founders as a secular state. With the Ayodhya dispute in the backdrop, Ram has been transformed into an icon of resurgent Hindu identity — his name often being invoked as a war cry by Hindu lynch mobs.

To mark the ceremony, an organization of Indian-Americans reportedly arranged for images of Lord Ram and temple to be displayed on billboards at Times Square in New York City. However, there are reports that the advertising company won’t run the images at the request of Muslim groups.

How have Muslims reacted?

Muslims make up about 14% of Indians, but across a total population of 1.3 billion, that means India has the third-largest Muslim population in the world— about 200 million Muslims. According to rights groups, hate crimes against Indian Muslims have been on the rise since Modi’s party ascended to power in 2014.

Response from the country’s Muslim community have been largely muted. Ahead of the groundbreaking ceremony, a Muslim member of Parliament called on Modi to not attend the function saying that it would be against his constitutional oath as prime minister of a secular country.

Prominent Muslim journalist Rana Ayyub called the temple’s inauguration on a site where “a criminal act” took place as the “ugly dance of facism.”

The supreme court verdict last year allotted a separate plot of land for a mosque to be constructed. A trust has already been formed for the construction of a mosque at a site about 15 miles from the original mosque. Muslims across the country had mixed reactions to the court verdict last year, with many expressing dissatisfaction over the verdict while many others hoped for closure and communal harmony going forward. 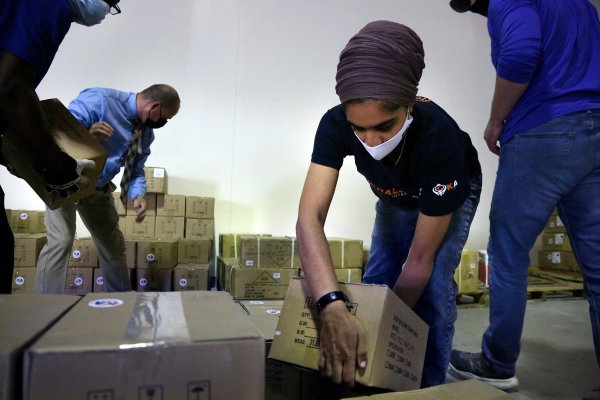