Kamala Harris and Black Women Voters Helped Joe Biden Get Elected. Here's How America Can Do Right by Them

Ideas
By Brittney Cooper
Brittney Cooper is a professor at Rutgers University and the author of Eloquent Rage: A Black Feminist Discovers Her Superpower.

When Americans elected Kamala Harris Vice-President, they symbolically completed a 150-year project of recognizing the right of Black people to exercise the full franchise as citizens. In 1870, the 15th Amendment gave African American men the right to vote. In 1920, the 19th Amendment secured the franchise for women. We commemorated both of these milestones this year, even as scholars acknowledged the ways that African American women were overlooked and, due to extreme racial repression, did not get to vote in significant numbers until the passage of the 1965 Voting Rights Act. We also marked the battle to expand the franchise under the shadow of a massive voter-suppression campaign undertaken by conservative politicians and the current President. The cautionary tale of Stacey Abrams’ loss in Georgia in 2018 indicated that the only way to overcome all attempts to undermine Black people’s voting power was to vote in overwhelming numbers, and so in order to deliver Joe Biden and Kamala Harris to victory, Black people did just that. As Harris ascends to the No. 2 role in this country, her presence offers us a chance to write a new chapter in our nation’s history, or perhaps simply to complete an old one.

Americans like to celebrate progressive victories by swiftly forgetting past failures. Let us not forget the eight years that we spent touting a narrative of being “postracial.” But part of what it means to have Black people in high office—or what it should mean—is a willingness to reckon with the damn near intractable barriers that caused it to take so long to get there. The first Black woman to express an aspiration to be Vice President was Charlotte Rollin, a race leader, suffragist and socialite who joked that she would be a great VP pick for the 1872 election. Harris is the fulfillment of a dream that Rollin could only facetiously entertain, a dream that eluded Charlotta Bass, the first Black woman to run for Vice President, in 1952.

Black women leaders are so important to this democracy precisely because they dare to keep dreaming, even after the immediacy of a perpetual nightmare like Donald Trump. Representation is not everything. But it is absolutely something.

Still, sometimes white liberals make the mistake of thinking symbolic gestures—for instance, adding a Black woman to the ticket—will be enough. Biden and many white liberals have already begun to speak in the language of “healing” and “unifying” the nation, even as our wounds are still fresh. Trump’s entire term has been marked by sexism and racism, yet more than 70 million Americans voted for him, in many cases not despite his abhorrent beliefs but because of them. The threat of injury from angry Trump voters remains. These Americans have no interest in being unified with a white man who would give a Black woman a shot at breaking the glass ceiling. And as a Black woman who is horrified at the overwhelming levels of support Trump received, I have no interest in any leadership that tells me I should want to be unified with people who think as the other side does.

One Black woman—historic, dope, progressive, passionate and competent, though she is—is not a sufficient salve for the festering wounds of American racism and sexism. In fact, it would be unfair to ask Harris to shoulder the burden of a unifying project that began 150 years ago and continues today. Unifying the country is not her job, but Black people are often expected to console and unify angry white folks when we make it to leadership positions. To riff on James Baldwin, it is “the price of the ticket.” Harris will be in the difficult position of serving as chief confidante and loyal advisor to Biden, chief translator of Black anguish to people in power, and chief diversity officer for a nation that thinks that title is the most appropriate way to leverage Black women’s formidable insights about centuries of racial injustice. Meanwhile Black communities will demand that she represent an actual progressive agenda on race and gender justice. In the end, her job as Vice-President is to support Biden in delivering on the policy promises he made, and to push him to do more. Her presence begins rather than ends a conversation about what America owes Black women.

It is not hyperbole to say that America has been snatched back from the brink of destruction primarily because of the energy Harris brought to the ticket, and the fervent organizing of Southern Black women like Stacey Abrams, who launched Fair Fight, and LaTosha Brown, who co-founded Black Voters Matter. It will take the political machinery that Abrams has built in Georgia to deliver Biden a Congress that he can actually work with to get things done. Because Biden would not be the President-elect without Black voters in cities like Detroit, Philadelphia and Atlanta, and Latinx voters in Nevada and Arizona, he must offer real plans that would improve the economic, social, and political conditions of Black and brown people. Simply diversifying the country’s leadership without prioritizing the well-being of the people who elected him would make Harris an empty symbol. She deserves for her tenure and presence to mean more than that.

What other Black women in leadership deserve is a range of seats at the table throughout the Biden Administration, and what everyday Black women, the Democratic Party’s most committed voting bloc who made this victory possible, deserve is increased hope, an end to COVID-19, economic opportunity, affordable health care and reproductive access, and safe communities in which to live and raise their children. What I am asking is for America to sit with what it truly means to ask Black women to energize the Democratic Party and save the country. We don’t want commemorative plaques; we want comprehensive policy.

The harder truth is that Black women voters did what white women voters refused to do. Honestly, white women could not do this. Their racial mandate to protect the power of their husbands and sons always muddies the waters of any feminist solidarity they might offer. Black women, who are fighting to protect themselves and their children from the power white men wield, have a different mandate. Elections like this are where those differences show up.

Kamala’s victory is a feminist one. No, she is not a radical feminist decrying capitalism or demanding abolition of prisons. But she did just strike a serious blow to one of patriarchy’s most enduring monuments, America’s previously all-white vice-presidential establishment. She did so as a progressive candidate with a commitment to fighting against racism and sexism in policy and in leadership. Her presence as both a Black and a South Asian woman is a tipping of the hat to the best of women-of-color solidarity movements that have existed in this country since the beginning, and her presence is a mandate for women of color, Black women in particular, to acknowledge and use our political power to push for the things that matter to us.

During Barack Obama’s presidency, we spent far too much time being enamored with the symbolism of his victory and far too little time demanding that he serve his people-of-color constituents. But women are always evaluated more harshly than men, even when they aren’t the President. It is our job as citizens to make Harris’ vice presidency count. That means that we must be willing to fiercely defend her in the face of racist and sexist attacks that impede her ability to do her work, and we must be willing to remind her that she works for us.

Her presence represents the maturation of Black women as political actors in an American nation-state that forced us to sit at the kiddie table over and over again. And now that we have made space for ourselves at America’s table, let’s go ahead and take over. The menu is ours to plan; the additional invites are ours to send; the flavor is ours to bring. 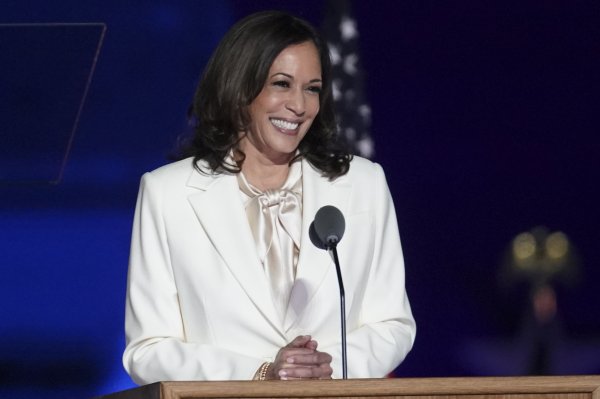 And the power of example
Next Up: Editor's Pick