When Kamala Harris was elected the next Vice President of the United States, the moment instantly became a historic one, three times over. Harris—whose parents came to the U.S. from Jamaica and India—will be the first Black Vice President, the first Indian American Vice President and the first woman to serve in that office.

There’s already some evidence that her multifaceted identity helped her connect with voters who see themselves in her. One NBC News exit poll found that Black and Asian voters had a more favorable view of Harris than white voters did. Experts believe that Harris’ position on the ballot boosted Asian American turnout in the 2020 election, and Asian Americans flooded Twitter with the hashtag #AAPISheRose in honor of Harris as she took the debate stage in October. Black voters similarly found inspiration in Harris’ prominent position in politics.

“I realized we’re going to have not only a woman VP, but a woman of color VP. She has Indian roots and Jamaican roots, and my family is Jamaican,” Leighann Blackwood, a voter from Georgia, told TIME in the wake of Election Day. “I can’t believe it’s taken this long, but it’s just truly inspiring.”

But Blackwood’s observation is a natural follow-up question to any “first” of the type Harris will achieve: What took so long?

For each of Harris’ firsts, the answer to that question is slightly different, but the history in every case speaks to the breaking down of barriers that silenced the voices of people of color and women.

Read More: These 2020 Candidates Made History With Their Election Wins

Long before political power was in question, mere participation had to be won. Though the 15th Amendment granted Black men the right to vote in the aftermath of the Civil War, in practice African Americans did not have full access to the vote.

After the Reconstruction Amendments were passed, scholars have identified more than 1,500 Black officeholders who served during the Reconstruction Era, from 1863 and 1877—including Hiram Revels, who became the first African American senator in 1870. But that period didn’t last.

“People figured out very quickly how to get around the 15th Amendment,” says Andra Gillespie, a political scientist at Emory University. And that meant not just that Black men couldn’t vote, but that they couldn’t elect Black politicians to represent them. That’s especially important, Gillespie explains, since “places that typically produce Black politicians tend to be areas with large African-American populations.”

In the decades that followed, the political reality of Jim Crow—including literacy tests, poll taxes and property-ownership requirements—ensured that Black Americans could not exercise their rights. The voices of Black Americans were also diminished when districts were redrawn to purposefully divide populations of color.

In 1920, women were granted the right to vote with the ratification of the 19th Amendment in 1920, but those voter suppression tactics kept many Black women from participating, despite the active work of Black suffragists. Many Asian Americans did not have citizenship then either, so they also could not vote, and immigration quotas and restrictions kept the Asian American population low.

It was not until the passage of the Voting Rights Act of 1965—which, after years of work by civil rights activists, outlawed discriminatory voting practices and offered equal opportunity for all members of the electorate “to participate in the political process and to elect representatives of their choice”—that Black women could actually count on the right to vote. Meanwhile, that same year, also thanks in part to the civil rights movement, saw the passage of the 1965 Immigration and Nationality Act, a law that eliminated national and ethnic quotas, thus enabling more immigration from countries including India.

“Many Indian Americans would not even be in this country, if it were not for the civil rights movement,” says Karthick Ramakrishnan, a professor of public policy at the University of California, Riverside and founder of AAPI Data.

Harris’ legacy is intertwined closely with that history. Her parents were civil rights activists who emigrated to the United States before immigration laws were liberalized. When her mother came to California from India in 1958, only a hundred Indians were allowed into the country annually. “The racist immigration laws that kept a tight lid on Asian migration to the United States are part of the reason why the Asian American community has been held back,” says Ramakrishnan.

“It has taken 55 years after the Immigration and Nationality Act of 1965 for the first Indian American woman to be chosen on the national ticket as a Presidential running-mate,” says Anjali Sahay, director of Gannon University’s political science program. “[Indian Americans] are understandably excited, energized and encouraged by the historic selection of California Senator Kamala Devi Harris, seen as ‘a daughter of immigrants.’”

Read More: What a Biden-Harris Administration Means for U.S.-India Relations

The end of legalized voter suppression and immigration quotas didn’t mean that the coast was clear for political equality—even today.

That’s true even among political groups—like Harris’ Democratic Party, the party that elected the first Black President, Barack Obama—that tend to attract the voters who most feel the impact of that history. For example, election-season questions about whether Joe Biden took Black votes for granted are part of a larger discussion, says Gillespie, about whether the Democratic Party is supporting a wide range of African American candidates to the same degree that it counts on African American votes.

“If there was somebody of color who did want to run for Senate or did want to run for Governor, was the party actively supporting them and encouraging them, or were they telling them things like ‘your electoral chances are weak’ or ‘you haven’t paid your dues yet?’” says Gillespie.

More broadly, Gillespie adds, America’s many years of only encouraging political aspirations of white men has meant that the electorate as a whole has suffered from a “lack of imagination” in terms of thinking about who looks like a leader.

But, of course, that’s changing. Some of those changes allowed Harris to get to her historic position—and some of them were shifts that she herself helped make happen.

The 56-year-old Harris is at “the leading edge of a whole crop of second-generation Asian Americans that are coming into political power,” says Ramakrishnan, because of the timing of the immigration reforms that allowed their parents to come to the U.S. Similarly, thanks to the first generations of women and African Americans who ran for public office, a next generation of leaders can rise to the top.

So Harris is not the only one breaking barriers. In recent decades, women and particularly women of color have made strides when it comes to harnessing political power, something that can be attributed to both an increase in population size and to increased mobilization. According to a 2019 report by the AAPI Civic Engagement Fund and the Groundswell Fund, the population of women of color in the U.S. as a whole has increased by 18% since 2008, while their voter registration rates have grown by 25%.

Members-elect including Alexandria Ocasio-Cortez, D-N.Y., pose for the freshman class photo of the 116th Congress on the East Front of the Capitol on Nov. 14, 2018
Tom Williams—CQ Roll Call/Getty Images

Perhaps the most obvious example of this phenomenon came in the 2018 midterm elections, when a record number of women were elected to Congress, including 47 women of color. The election, in which 33% more women of color voted than in 2014, helped Democrats flip the house and launched the careers of rising political stars like first-time Congresswomen Alexandria Ocasio-Cortez, Ilhan Omar, Rashida Tlaib and Ayanna Pressley. The trend has continued in 2020; according to the Center for American Women and Politics, 134 women so far will serve in the next Congress, seven more than who served in 2019.

And now Harris has the biggest stage yet when it comes to political ascent for Black women and women of color in the United States—and, if the history is any indication, her success will encourage others to follow.

Read More: ‘It’s a Struggle They Will Wage Alone.’ How Black Women Won the Right to Vote

“We typically haven’t thought about women of color as political leaders, and now we’re seeing women of color as top members of Congress and Vice President of the United States,” says Gillespie. Ramakrishnan says the U.S. should expect to see a “Kamala effect,” as more women and women of color run for office, and overall participation from those groups increases.

Even for those who don’t plan to run for office, especially among many women and Black and Asian Americans, a psychological “Kamala effect” can already be felt. It’s something that Judith Komaki, a 75-year-old voter in New York City, marveled at following the election.

“I never imagined as a child growing up in the ‘50s, that I would see a woman of color as a vice presidential nominee,” she says. “To actually see Kamala, a woman and a person of color, ascend to this position—it opens up a dream that I had never anticipated or aspired to. It just makes my heart sing.”

Write to Anna Purna Kambhampaty at Anna.kambhampaty@time.com and Cady Lang at cady.lang@timemagazine.com. 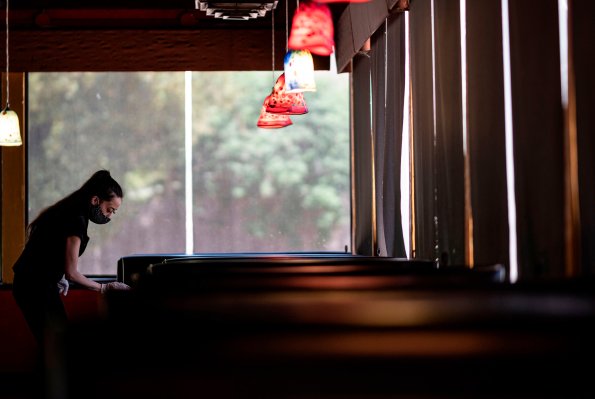 The Economy Is Going to Get Worse
Next Up: Editor's Pick