Diversity Has Become a Booming Business. So Where Are the Results?

Illustration by Gracia Lam for TIME
Ideas
By Pamela Newkirk
Newkirk is the author of Diversity, Inc.: The Failed Promise of a Billion-Dollar Business

Facing backlash in February over a sweater that looked like blackface, Gucci followed a now predictable course. Company officials apologized for appearing to mine demeaning imagery from the past; hired a global diversity czar, who is African American; and vowed to create multicultural scholarships and a more diverse workforce. Burberry announced similar efforts after it showed a hoodie that looked like a noose the same month, and Prada did the same in 2018 after it had unveiled a line of figurines that also resembled blackface.

This is not just the playbook of the fashion industry. Dozens of companies and institutions have sought to deflect controversy over embarrassing missteps or revelations of homogeneous boards and workplaces by launching high-profile initiatives or enlisting a person of color for a prominent post.

In 2003, MIT professor Thomas Kochan noted that companies were spending an estimated $8 billion a year on diversity efforts. But since Trump’s election, and with the emergence of movements like #MeToo and Black Lives Matter, the industry has exploded. A 2019 survey of 234 companies in the S&P 500 found that 63% of the diversity professionals had been appointed or promoted to their roles during the past three years. In March 2018, the job site Indeed reported that postings for diversity and inclusion professionals had risen 35% in the previous two years.

The lucrative industry shows few signs of waning–from the spike in well-compensated diversity consultants and czars; to online courses and degree programs at prestigious schools; to professional organizations and conferences; to the commissioning of ever more studies, task forces and climate surveys. The buzzword is emblazoned on blogs and books and boot camps, and Thomson Reuters, a multinational mass-media and information firm, even created a Diversity and Inclusion Index to assess the practices of more than 5,000 publicly traded companies globally.

A look at higher education–where, in fall 2017, 81% of full-time professors at degree-granting postsecondary schools were white while just 3% were Hispanic and 4% were black–is helpful in understanding the forces that allow these disparities to persist. Though the 1960s saw the introduction of affirmative-action policies intended to address the history of slavery followed by centuries of discrimination against people of color, decades of legal challenges have undermined these measures. Since 1978, for example, Regents of the University of California v. Bakke has prohibited institutions from using racial quotas or other remedies to address past discrimination.

Because of this decision, says Columbia University president Lee Bollinger, who as president of the University of Michigan was named in two lawsuits in which white students who’d been denied admission claimed reverse discrimination, “we’re deprived of the context that gave it a sense of mission. Every college leader is told, ‘Do not refer to history.'”

In recent years, “diversity” has been touted as a feel-good exercise that includes everything from gender to sexual orientation to body size. But while we should be concerned about discrimination against any group, the term has become such a catchall that we’ve lost focus on the original intent of antidiscrimination efforts. “There hasn’t been enough pushback on the abstraction of diversity,” Bollinger says.

What’s more, many whites now claim they are being disenfranchised as others are afforded undue advantage. A 2017 NPR poll found that 55% of white Americans believe that white people are discriminated against, while, tellingly, a lower percentage said they had actually experienced discrimination. Moreover, renewed calls for diversity are playing out against resurgent white nationalism; a rise in bias crimes; and a President who has denigrated Mexicans, Muslims and blacks, among other groups.

Although the worsening racial climate appears to power the diversity industry, a number of studies suggest that these initiatives can actually make matters worse by triggering racial resentment. Think of the Google engineer who was fired for writing a memo deriding the company’s diversity efforts. He went on to file a class action claiming Google discriminates against conservative white men before ultimately moving to arbitration.

For diversity to become a reality in the nation’s workplaces, companies and institutions need to do more than recycle costly and ineffectual initiatives. Cyrus Mehri, a civil rights lawyer who successfully litigated discrimination lawsuits against major corporations including Coca-Cola and Texaco, says companies need to analyze metrics related to hiring, pay, promotions and bonuses along racial and gender lines to detect and disrupt patterns of bias.

“Everybody is quick to do unconscious-bias training and not interventions,” says Mehri, who, with the late civil rights lawyer Johnnie Cochran, is credited with devising the NFL’s Rooney Rule, which requires a diverse slate of candidates for coaching and front-office jobs. “When you keep choosing the options on the menu that don’t create change, you’re purposely not creating change,” he says.

To wit, A Leader’s Guide: Finding and Keeping Your Next Chief Diversity Officer, a report published this year by the consulting firm Russell Reynolds Associates, stated that more than half of diversity professionals do not have the resources or support needed to execute programs and strategies. Only 35% had access to company demographic metrics, and a survey of 1,800-plus company executives found that diversity ranked last on a list of eight potential business priorities.

But persistent failure appears not to have prompted many institutions to change course. Although Google reportedly spent $114 million on its diversity program in 2014, its diversity report this year showed that blacks made up just 3.3% of the workforce and held 2.1% of tech and 2.6% of leadership roles.

Why do companies spend so much to achieve so little? Lauren B. Edelman, a professor of law and sociology at the University of California, Berkeley, and the author of Working Law: Courts, Corporations and Symbolic Civil Rights, found that courts tend to look for symbolic structures of diversity rather than their efficacy. In other words, the diversity apparatus doesn’t have to work–it just has to exist–and it can help shield a company against successful bias lawsuits, which are already difficult to win.

Misan Sagay, a black filmmaker and member of the Academy of Motion Picture Arts and Sciences, says more attention also must be paid to what happens once people of color are hired. “A lot of the times they want our physical presence but not our voice,” she says, explaining that real change begins with the composition of the studio executives who greenlight projects. “There should be some brown faces when I’m pitching,” she says. “Until there’s diversity at every level, I doubt filmmakers of color will be on a level playing field.”

True progress won’t come without discomfort, says Darren Walker, president of the Ford Foundation, which allocates hundreds of millions of dollars annually to efforts promoting equality. “It requires incumbent leaders and managers to change their behavior and practices,” he says. “It means that institutions have to change incentive structures and to fundamentally interrogate their own behavior.” Walker adds that this is not just a conservative problem, as many purportedly progressive fields, like fashion and entertainment, also lack diversity.

In the end, racial diversity will not be ushered in by pledges, slogans or czars. It will be achieved only once white America is weaned off a prevailing narrative of racial pre-eminence, which can still be glimpsed in historical narratives, film and literature, and in racially offensive iconography like blackface. The seeds of this corrosive ideology are planted early, and a paradigm shift will require courageous leadership. Yes, change will require resources and resolve, but no amount of money will succeed alongside a willful negation of our shared humanity. 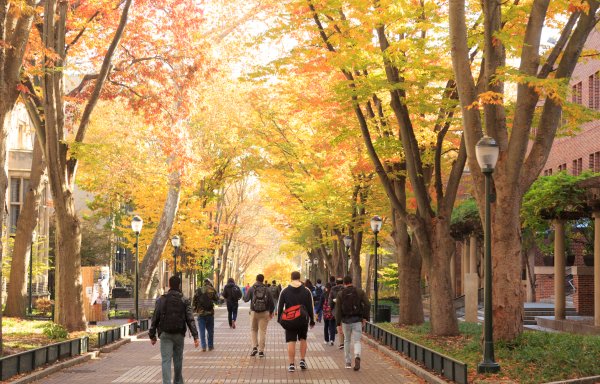 The Case for Conservative Universities
Next Up: Editor's Pick