The Voting Rights Act at 50: How It Changed the World

It was only eight days after President Lyndon B. Johnson signed the Voting Rights Act on Aug. 6 of 1965 that federal voting examiners speedily dispatched to Selma, Ala., proceeded in a single day to register 381 new black voters, more than had managed to register in Dallas County over the last 65 years. Local Sheriff Jim Clark’s hair-trigger resort to physical violence against would-be black registrants had left little doubt of his determination that such a day would never come for his town. Yet, ironically, he had actually helped to assure that it did, when, back in March of that year, he led the charge in the savage “Bloody Sunday” beating and maiming of voting-rights marchers, an event that had sparked national outrage and spurred demands for stronger federal intervention. By November, the county had 8,000 new black voters—and, not coincidentally, after the next May’s primary elections it would have a new sheriff as well, leaving Jim Clark to try his hand at selling mobile homes.

Though the consequences were rarely so immediate, the new law’s impact was otherwise much the same anywhere a white minority had historically ruled with an iron hand. The Justice Department could now send examiners to any state or county where a literacy test or a similar deterrent to black registration had been in effect as of the 1964 presidential election and where turnout or registration for that election had fallen below 50% of the voting age population. Such “special coverage” jurisdictions were also required to seek federal “pre-clearance” prior to changing their election or voting procedures. Initially, these provisions applied to every Deep South state except Florida, plus Virginia and some 40 counties in North Carolina. And they worked, nowhere more obviously than in Mississippi, where the percentage of eligible black voters registered ballooned from 7% in 1964 to 67% just five years later. The new measure’s reaffirmation of the right to vote regardless of “race or color” applied to all states, and by 1980 the percentage of the adult black population on the voter rolls in the South had already surpassed that in the rest of the country. Although 3 million more white than black voters were added to southern rolls in the 1960s, the Voting Rights Act’s “special coverage” states, which showed a combined total of 72 black elected officials in 1965, boasted nearly 1,000 a decade later. By the mid-1980s there were more black people in public office across the South than in the rest of the nation combined Although the share of public officeholders still fell well short of the black share of the population, by 2001 the gap outside the South was nearly 4 times greater than within it.

The tangible benefits of the Voting Rights Act for blacks did not stop there, as economic historian Gavin Wright has recently shown. Even before black candidates began to win public offices, even in remote areas like Panola County, on the edge of the Mississippi Delta, white politicians were wooing the most influential members of the black community. There and elsewhere, black residents who had long despaired of ever getting their streets repaired were suddenly spotting maintenance and even paving crews in their neighborhoods. Meanwhile, as Wright and others have indicated, from courthouses to statehouses, a significant black presence has typically meant meaningful gains in black employment, income and opportunity. Even in still-impoverished areas, black political empowerment has brought a noticeable increase in the share of state transfer payments. James Button’s study of six Florida cities shows black municipal employment quadrupling between 1960 and 2000, with blacks occupying 25% of the supervisory positions by the end of that span. Blacks in elected positions could boost private employment as well. Maynard Jackson became Atlanta’s first black mayor in 1974 and by the time his successor Andrew Young left office in 1990, the city had granted almost 1,600 contracts to more than 600 minority-owned firms.

Such gains have not gone unnoticed—for better or worse. The Supreme Court has recently grown more tolerant of efforts to chip away at the signature political achievement of the Civil Rights Movement, often reverting to the same logic (looking for proof of discriminatory intent rather than discriminatory effect) that undid the 15th Amendment’s original voting-rights guarantees more than a century ago. By Election Day 2012, 19 states had imposed restrictions on registration or voting that could depress minority turnout—including five still subject to the original 1965 preclearance requirement. The Court brushed this obstacle aside, however, ruling on June 25, 2013, in Shelby County [Ala.] v. Holder that the preclearance stricture was not only unconstitutional but long since unnecessary. The Voting Rights Act had worked so well, the logic went, that it was no longer needed. Within hours, lawmakers in a number of states were preparing to add voting provisions. For example, Republican legislators in North Carolina moved to cut the state’s early voting period almost in half, eliminate same-day registration and impose a much more stringent identification requirement. With these measures currently under scrutiny in a federal courtroom in Winston-Salem, NAACP lawyers have taken to calling the case “our Selma.” And, just this Wednesday, a federal panel found that one Texas identification requirement did violate the 1965 act.

Yet just as some modern Supreme Court decisions have echoed the logic of the past, we should be mindful that the Court’s readiness in the late 19th century to dismantle the civil rights protections implemented during Reconstruction was no mere regional accommodation but indicative of a national abandonment of the cause of racial equality. Today, with the South accounting for only 40% of the states with active, recently imposed voter restrictions, the Sheriff Jim Clarks of the modern world are as likely to practice their subtler forms of intimidation in Madison as in Montgomery, suggesting that, instead of bringing closure to a long struggle, the current battle in North Carolina is surely but one of many more to come. 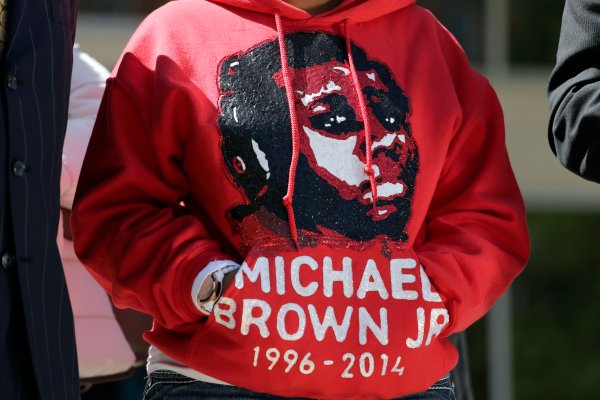 Ferguson Prepares for Anniversary of Deadly Shooting
Next Up: Editor's Pick