Kamala Harris Is the Third Woman to Run as a Vice Presidential Candidate for a Major U.S. Party. Here's What to Know About the First

By Olivia B. Waxman
The July 23, 1984, cover of TIME with Geraldine Ferraro.
Diana Walker

By accepting the nomination to be Joe Biden’s Democratic Vice Presidential nominee on Aug. 19, Kamala Harris became the third woman —as well as the first Black woman and the first person of Indian descent — to be selected as a running mate on a major presidential party ticket.

She follows in the footsteps of Geraldine Ferraro, who became the first woman on a major White House ticket when she was picked to be the running mate of 1984 Democratic presidential candidate Walter Mondale. (Sarah Palin, a Republican, was second.)

In a July 23, 1984, cover story headlined “A Historic Choice,” TIME reported that Democratic presidential candidate Walter Mondale picked a woman in order to liven up the ticket. (In fact, Ferraro wasn’t the only woman he considered; TIME reported that then-San Francisco Mayor Dianne Feinstein was en route to a studio for a TIME photo shoot when Mondale called her to say he had chosen someone else.)

The magazine argued that choosing Ferraro, who was also the first Italian-American vice presidential candidate for a major party, was also practical on some level. It could woo women—who represent a majority of the electorate—as well as “ethnic” and “urban” voters, the story read. The choice “transformed” what had become a “dull” campaign by adding “verve” and “flair.” It also energized a women’s movement recently disappointed by the lapsed deadline to ratify the Equal Rights Amendment in 1982.

No matter what it would mean to the ticket, Ferraro knew what it meant to women across the country.

“We always have anxieties until we do it the first time, and then we usually recognize that those anxieties are baseless,” she said, responding to polls indicating resistance to a female vice presidential candidate among Southern white men. “This is a first, and it’s bound to create concerns; but we are going to put those concerns to rest quickly.”

Speaking more broadly about the broader significance of her candidacy on society, she said, “If a woman can be Vice President of the U.S., what job is there that a woman cannot do?”

The magazine further described the significance of the choice back then in that issue:

Ferraro was born in Newburgh, N.Y., on Aug. 26, 1935, (now known as Women’s Equality Day) in the middle of the Great Depression. Her father died when she was young, and her mother, a seamstress, raised the family in the South Bronx. After college, Ferraro taught second grade in the 1950s, but got bored and started attending Fordham Law School at night. After graduation, however, she found that Wall Street law firms were still resistant to hiring women, and she became a stay-at-home parent—until her cousin, who was Queens District Attorney, hired her as a prosecutor. When she wasn’t handling child abuse, rape and domestic violence cases, she was involved in local Democratic politics and talking to voters.

In 1978, she ran for Congress, to represent the neighborhood in Queens, N.Y., known for being home to Archie Bunker. She won. True to her campaign slogan, “Finally, A Tough Democrat,” she became known for not seeking out the cameras and her behind-the-scenes deal-making skills.

The excitement about Democratic vice presidential nominee Ferraro was short-lived, however. By August, a controversy over her husband’s reluctance to release his tax returns raised eyebrows, and the couple ended up paying $53,000 to the IRS for a so-called accounting error. Her lack of foreign policy experience also made her vulnerable to attacks, especially in the middle of the Cold War.

In the end, America re-elected President Reagan in a landslide. Catholics, women and Italian Americans voted for him over Mondale by large margins, leaving TIME to conclude in the Nov. 19, 1984, issue that Ferraro “appears to have hurt Mondale at the polls more than she helped him.” A woman in Memphis told TIME, “I’m a liberated woman, but I don’t think a woman should be running things in Washington.”

After the election, Ferraro returned to practicing law, accepted a fellowship at Harvard, wrote books and served as U.S. ambassador to the United Nations Commission on Human Rights. She also made unsuccessful bids for the U.S. Senate.

“Gerry and I are often linked together,” Secretary of State and future presidential nominee Hillary Rodham Clinton said at Ferraro’s funeral. “She is seen correctly as paving the way for my political career and those of many other women. We owe her so much. She inspired us women and girls. All of us thought new thoughts and imagined new possibilities because of Gerry.”

At the time, Mondale also recalled the resistance she faced from men on the 1984 campaign trail.

“We went down to Mississippi, and some old farmer said, ‘Young lady, do you make good blueberry muffins?’ And she said, ‘Yes. Do you?’ That was the kind of thing that she was bumping up against,” he told TIME. “She had to keep her cool. She had to be nice about it. And yet she was undergoing a revolution. It wasn’t just automatic. It was her guts and her vision and the depth of her beliefs that helped her get it done.” 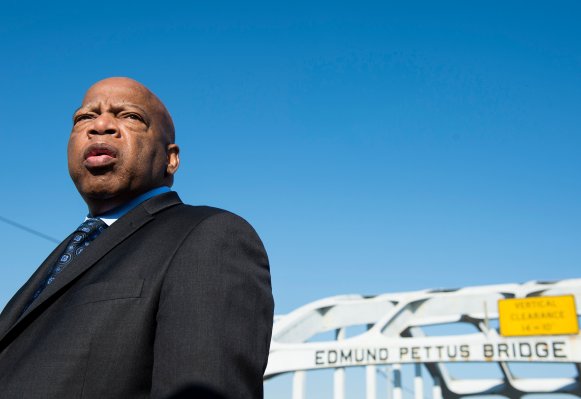 John Lewis Was the Most Christ-Like Person I Ever Met
Next Up: Editor's Pick