‘I Have a Lot of Ideas for Amendments.’ Playwright Heidi Schreck on Her Hit Play About the Constitution and the Fate of the Supreme Court

Heidi Schreck used to be an enthusiastic supporter of the U.S. Constitution. As a teenager, the actor and playwright would travel the country reciting its amendments and defending its virtues as part of the American Legion Oratorical Contest. The prize money that she took home from these contests helped her pay for college.

But Schreck’s views on the founding document began to shift as she got older, and especially as she saw how it failed to protect women, including members of her own family, from violence. More than 10 years ago, she began writing a mostly one-woman play called What the Constitution Means to Me, in which she wrestled with these evolving views and proclaimed, “Our bodies had been left out of the document from the beginning.”

When the play arrived on Broadway last year, it was met with ecstatic reviews: Tony Kushner, the playwright of Angels in America, called it “one of the most exciting things I’ve ever seen.” The play won Obie and New York Drama Critics’ Circle awards for best new American play, was a finalist for a Pulitzer Prize, and was nominated for two Tony Awards. TIME named it the fifth best play of the year.

On Friday, a taped performance of the Broadway production from last summer will arrive on Amazon Prime Video at a particularly potent moment to be grappling with the Constitution’s merits and flaws. Statues of the men who ratified it are being toppled; hearings are underway for a Supreme Court Justice nominee who some say is the antithesis of the justice whose seat she is poised to fill; and experts wonder if the results of next month’s election could set off a constitutional crisis.

In a phone interview earlier this week, Schreck took in the weight of the moment, talking about her encounter with the late Ruth Bader Ginsburg and the ways in which the theater community needs to change. These are excerpts from the conversation.

TIME: In the play, you talk about your penchant for “Greek tragedy sobbing,” saying that it’s “maybe the appropriate response to everything happening right now.” Compared to last year, what has your 2020 been like?

Schreck: I gave birth to twin girls in April of this year and I love them more than I thought it was possible to love anyone. Beyond that, this year has felt like a hallucinatory nightmare. Because I was pregnant or a new mother for almost all of it and in quarantine, I’ve been getting news of the outside world by staying up at night reading Twitter while nursing my daughters. There’s a deep sense of unreality about all of it.

Do you feel like your show has taken on increased urgency over the last year due to everything that’s happened in the world?

I started writing the show over 10 years ago and performed it almost daily for nearly 3 years. Though the show is designed to feel spontaneous, it’s very carefully constructed and hasn’t really changed much, because everything that’s happening right now is a result of decisions that were made 400 years ago. The big reckonings we’re having in terms of race and the original crimes of slavery; of women’s bodies and the law; of the co-equal branches of government and whether those are functioning well right now—these are all current, topical issues, but they were all set into motion so long ago.

The late Justice Ruth Bader Ginsburg was an avid theatergoer, and last June, she saw What the Constitution Means to Me on Broadway. What do you remember about that experience?

We all were speechless. Thursday Williams, one of our great debaters [who is featured in the final segment of the show], always had an RBG pencil tucked behind her ear when she performed. That night, she thought the audience was very out of control, making noises she hadn’t heard before. When we told her that Justice Ginsburg was in the audience, she collapsed to the floor. Justice Ginsburg then came backstage, which was delightful. She was sitting down and stood up to hug Thursday—I remember being incredibly moved by that.

She sent a nice letter to us afterward and asked us for a copy of the script. I told my stage manager I was nervous to send it to her, because I was sure she would find errors in it. He said, “Oh, Heidi, stop it. She doesn’t have time to read your play. This is just a symbolic act.”

A few days later, I got a Fedex package that had a copy of one of the cases that I discussed flagged with some things to look at, and then a letter thanking me for the script and giving me two notes. One had to do with changing a piece of language from “would have” to “might have.” She wanted me to be more precise with my language. The other one had to do with how to talk about the Equal Rights Amendment.

At the end of the play, a recording of Ginsburg plays, with the late justice asking the question, “When will there be enough women on the court?” and answering with: “My answer is, when there are 9.” Why did you decide to include her voice?

Like many of us, I am so grateful to her for the work she did, both on the court and maybe especially as a lawyer. Starting in 1971, when she argued that the Equal Protection Clause ought to include equality based on sex or gender. Then the series of cases she brought in front of the Supreme Court that completely transformed my life and the lives of so many women in this country. Because of her, I can have a credit card, I can have property in my own name.

But also on a more personal note, I had been listening to her voice for 10 years: I’ve listened to hundreds of hours of Supreme Court cases online on Oyez. I really fell in love with her voice. Sometimes you listen to [Supreme Court recordings], it feels like the law can become really divorced from the lives of human beings. But whenever I heard her speak, both the things she was saying and the amount of feeling and emotion in her voice made me feel like she was holding space for the real human life at the center of the case at all times.

Supreme Court nominee Amy Coney Barrett considers herself an originalist and a textualist in the mold of her mentor, Justice Antonin Scalia, who interpreted the Constitution according to what he thought was the framers’ intent. What do you think of originalism?

The play answers what I think about originalism more cogently than I can do right now. The only thing I’ll say about it: I’ll return to Justice Ginsburg and say that any approach to law that doesn’t put the human being at the center, I’m suspicious of.

Your play ends with a mock debate between you and a high schooler, alternating in different performances between Williams and Rosdely Ciprian, about whether to keep or abolish the Constitution. Where do you stand on that at the moment?

I think we should keep the Constitution. I have a lot of ideas for amendments. But really, the purpose of the debate is to allow the audience and performers to make time and space to imagine something else: to say, “What if we were in charge of creating America today? If we were the framers, what would we do differently? What kind of future do we want for ourselves?”

There are many others right now who are engaging in similar acts of reimagination, over policing, prisons and more. Are you inspired by these efforts?

It seems like more and more people in the mainstream are able to say that the structures of this country are racist and are perpetuating racism. That idea has moved much more to the center than I can remember in my lifetime. I do think there is hope in that. I think reimagining our prison system is a hopeful idea, and that acknowledging that it is an extension of slavery is important. The next step is an act of imagination. What might we create instead?

I’m part of the American theater, which, like everything else, is an institution that needs rethinking. The pandemic has shut everything down, which is really painful and hard on so many of us. But the one kernel of hope in there is, could we imagine, when we come back, a theater that is more inclusive, that pays its workers better? That provides a better safety net? I do think we’re having to rethink everything—and I think there’s something optimistic in there.

What did you think of the “We See You, White American Theater” letter written in July that condemns racism in the theater industry?

I think the letter is a great act of generosity. The rest of us, especially white artists in the theater, white artistic directors and board members in positions of power, need to accept the gift of it.

In the future I will think much harder about how I’m finding my collaborators and who I’m choosing for certain positions. If you’ve been an artist in a theater that’s exclusionary for a long time, it probably means you’ve worked with a majority of white artists. If you keep saying, “I’ll keep working with the people I know really well,” you’re going to be perpetuating a racist system. It’s challenged me to think about how I write plays, who I write for, and who I choose as my directors, designers and more.

In addition to seeking out BIPOC artists to collaborate with, I want to do better at advocating for change and calling out bullsh-t. For example, pushing theaters I work with harder to make sure their staffs are diverse, refusing to work with theaters or companies who aren’t. Also, I have been thinking about what it might mean to step aside at moments and to recommend artists who are being overlooked because of racism for opportunities I am offered.

The audience of a Broadway play is more self-selective, whereas on Amazon Prime, you’re now competing with a massive catalog of familiar favorites. How might you convince an audience to watch something they might perceive as challenging?

Luckily, that’s not my job. That’s what a whole marketing team is for. But my hope is it will work as it did in the theater: I started performing the show for an audience of 30 people and didn’t think it would have much appeal beyond that. The fact that more and more people kept wanting to see it, and we kept moving to bigger theaters, makes me think that the show will find the audience that’s meant to watch it.

What are the main things you wish the general public knew about the Constitution?

I think many people don’t read the Constitution or actually know what it says. I would include myself in that number except for the fact that my mom made me do the contest. It’s a beautifully written little document. You can get a pocket size one and carry it around. I would love for more people to read it and think about it. 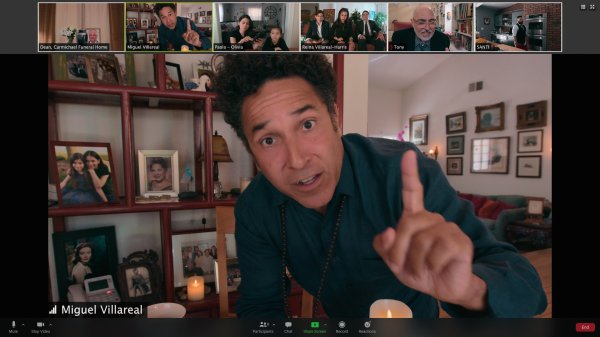 All These Terrible Quarantine Shows Are Giving Me Zoom Fatigue
Next Up: Editor's Pick