If Election Day Doesn’t Yield a Quick Answer, the Chaos to Come Could Be on a Spectrum

We’ve used this newsletter this week to sketch out a handful of likely outcomes of the election. We considered a scenario in which Joe Biden has built an insurmountable lead and is coasting to a clear victory and another in which Donald Trump pulls a rabbit out of a hat and prevails. Today we offer a third scenario: the winner isn’t immediately clear and the country is plunged into weeks or months of uncertainty.

Given everything we’ve gone through this year, is there any reason to expect that 2020 will give us anything tidy? A warning to those battling anxiety: what follows is a doomscroll of the first order.

We should be prepared for the prospect of electoral snafus, recounts and pitched court battles. How severe the fallout from these problems are will likely land on a spectrum, from annoying delays to full-blown civilian insurrection. Those are poles of extremes for sure, but they aren’t unimaginable in a country that’s facing an ongoing pandemic and economic crisis, a reckoning on race and an incumbent President and Vice President who repeatedly refuse to pledge fealty to a peaceful transition of power.

The turnout for the election is projected to be a once-a-century event, the U.S. Postal Service is now an accidental elections administrator and COVID-19 hasn’t exactly made balloting easier. The load of early returns is already massive: almost 6 million returned ballots and counting, according to Democratic firm TargetSmart. The unexpected could escalate quickly, so we’re going to take this in orders of intensity and hope for off-ramps to be built in the next three-plus weeks.

Every American should be prepared not to know the results of the election on Election Night. Or the day after. Or the week after that. This is nothing to panic about. Reporting and counting delays are regular occurrences. I landed one of my first bylines in The Washington Post back in 2006 with a piece about all of the House races in that midterm election that remained uncalled days later. Often, these delays are the result of an abundance of caution. Although errors do occasionally happen, it’s worth remembering that my former bosses at The Associated Press were finalists for a Pulitzer Prize, in part, for their refusal in 2000 to declare a winner in that year’s presidential race. During five November election nights in the AP’s newsroom — and hundreds of primary nights in the field — I witnessed over and over that a hunch was never the substitute for a data-driven decision. If race calls are delayed, that’s a sign of responsibility.

Those slow decisions, though, can be compounded if the data that’s coming out of precincts are flawed. It’s worth remembering that the United States doesn’t actually have a national election. Instead, there are hundreds of elections, each contained within the borders of cities, counties, states, territories and the odd creation that is the District of Columbia. It’s possible that garbage results can start in one, local precinct, then be fed up to county election offices, loaded into state systems, and advanced as state tallies. The temporary contractors hired by news organizations in key precincts can get things wrong. Exit polls, similarly, can bring problematic results suggesting the correct numbers are being called into question and misrepresent what voters actually did inside those schools, churches and libraries. The clearest example, as my TIME colleague Molly Ball unpacked, is the disconnect between how women voted in 2016 based on exit polls and how they actually voted.

And of course, we can’t dismiss the possibility that domestic or foreign adversaries might physically hack election results. Russia targeted election systems in all 50 states in 2016. They got through the door in several states and tried to change data. Swing states were of particular interest. This cycle, foreign meddling has gotten less attention, but our enemies’ interest hasn’t waned. Top intel officials have repeatedly warned about this threat and, on Wednesday, FBI Director Christopher Wray published a video seeking to calm fears of a hijacked election. (For the view from Moscow, check out my colleague Simon Schuster’s reporting in the links below.)

Perhaps more potent than hacking is the psychological hijack. America’s enemies have long been busy sowing doubts about the merits of our imperfect democracy, and bad actors in Russia, China and Iran are online everyday seeding social media with disinformation and conspiracy theories. The President’s diagnosis of COVID-19 illustrates this perfectly, as Russian, Chinese and Iranian platforms amplified doubts about Trump’s health and future, as my TIME colleagues W.J. Hennigen and Vera Bergengruen illustrate. Democracy hinges on a faith in the system. If you want to destroy the system, all you have to do is hobble that faith.

And this brings us to the threat from inside the house. Trump has for months been planting doubts about the validity of the election. Social media has given him safe harbor, as Bergengruen reported back in September. There is a very real scenario in which everything has gone wrong: votes are missing, counts are inconsistent, hackers are behind the firewalls and fact-checkers prove no match to troll farms. At this point, we don’t yet know who won. And yet, by harnessing the megaphone of his office — fueled by his Twitter platform — Trump declares himself the victor. That declaration won’t make it true, but it does run the risk of discrediting legitimate challenges. When the Gore-Lieberman campaign fought for a recount in 2000, Republicans dubbed it “Sore Loserman.” Even if Trump were to lose in the courts, he’s already planted the seeds of doubt. The “Not My President” posture has potency on both sides.

We can expect at least some of these disputes to be litigated in the courts. Yes, plural: dozens of courts — including lower state courts, state supreme courts, federal courts, appellate courts, and the U.S. Supreme Court — could be in on the action. This process may be be politicized. In states where judges are elected, there’s a political element to deciding if that smudge is a vote and in federal courts, the question of who nominated the judges will be paramount. In the last three and half years, Trump has appointed, and he Republican-led Senate has confirmed, nearly a quarter of all active federal judges in the country. If the Senate confirms Trump nominee and conservative star Amy Coney Barrett to fill the seat of liberal icon Ruth Bader Ginsburg, a contest heading to the High Court could only create more chaos.

Finally, before we get to this ultimate nightmare scenario, a warning: the following is not something that is likely to happen. It probably won’t. But it might. It could. And it’s only responsible to tell you that it could become a reality. I’ve given you enough time to bail on this next paragraph. Read at your own peril.

This is a big one: the U.S.devolves into crisis. The election results are discounted, and the matter moves from the courts and into the streets, where there’s mass rioting and violence. The demonstrations that played out in 1965 and 1968, 1992 and 2014? They are nothing. This is when the finale of Christopher Nolan’s Dark Knight series becomes prophecy: streets packed with an uprising and violence. It’s a dark idea that could become reality. Instinct tells me America’s ideals guard against this dystopia, that voters will respect the will of their neighbors, and that our democratic institutions, however weakened, remain strong enough to prevail. Pink hats and MAGA caps are one thing but insurrection is another. This dismal year has given us few facts to argue this posture. Only optimism and instinct can help here.

Most Popular on TIME
1
What to Know About Shooting of Protesters in Nigeria
2
Netflix’s Marvelous The Queen’s Gambit Is the Kind of Prestige Drama TV Doesn’t Make Anymore
3
With Dwindling Time to Turn the Race Around, Donald Trump Taps into Positive Thinking 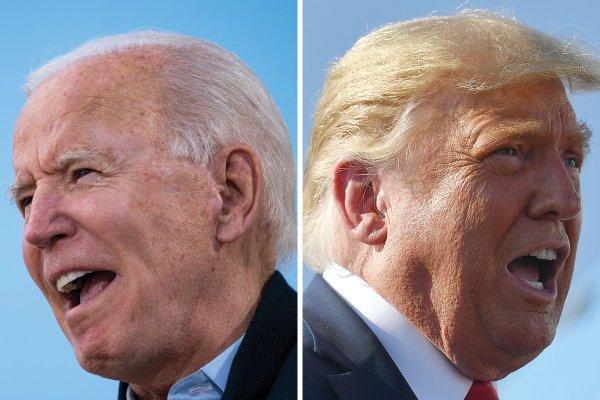 Muted Microphones and Lots of Interruptions: What To Watch In 2020’s Final Debate
Next Up: Editor's Pick