Trump Repeatedly Attacked Mail-In Voting During the Debate. There's No Evidence Behind His Claim

The chaotic inaugural presidential debate between President Donald Trump and former Vice President Joe Biden culminated in one of the most contentious exchanges of the night, with Trump doubling down on his intent to sow doubt in the integrity of the election system.

After Biden committed to accepting the results of the election – regardless of the outcome – and stressed the security of mail-in ballots, Trump insisted, without any evidence, that “this is going to be a fraud like you’ve never seen.”

“These ballots are going to be all over,” he said. “Its a fraud and it’s a shame.”

Trump, who, as Biden noted, votes by mail himself, has uttered many of these sentiments before. But the optics of relaying them during a debate expected to draw over 100 million viewers still baffled and infuriated legal experts. “The President’s answer about fraudulent ballots was nonsense,” says Mark Gaber, director of trial litigation at the bipartisan Campaign Legal Center. “All validly cast ballots — including mail-in-ballots like those cast by the President in Florida — will be counted and the winner in each state will be determined by counting the ballots.”

Rick Hasen, a law professor at University of California, Irvine and an election law expert, wrote on Twitter that questioning the elections process will cause voters to question the system as a whole when issues inevitably arise. “Let’s admit this now: We are not going to have a perfect election in November. There will be reports of ballots sent to voters that end up in the trash or in a ditch,” he wrote. “This doesn’t mean we won’t have a fair election overall, and we should not allow cynical political operatives to parlay small-bore errors into a full-scale attack on the integrity of the November vote.”

Trump’s rhetoric on the validity of the elections process was both lacking evidence and in stark contrast to how the issue is being judged in courtrooms across the country. The Trump campaign and the Republican National Committee have filed a series of lawsuits in states that have expanded mail-in-voting — many as a result of the coronavirus pandemic — alleging that these new regulations are a blueprint for fraud and will undermine the integrity of the election system. This has largely been a losing battle. In crucial swing states like Wisconsin and Pennsylvania, the courts have ruled in favor of expanded access to mail-in voting.

Just hours before the debate was slated to begin, Marc Elias, chair of Perkins Cole’s Political Law Group who is leading litigation efforts across the country for Democrats, wrote on Twitter that a federal judge in Wisconsin had denied Republicans’ request to overturn the decision that allows voters’ mail-in ballots to be counted through November 9th. “We are not tired of winning!” he tweeted.

The Trump campaign and its associates are pushing back, though. In Pennsylvania, the state Supreme Court ruled earlier this month that the state could receive absentee ballots through November 6, providing that they were postmarked on or before Election Day, and that ballot drop-boxes were permissible. On Monday, lawyers for the top Republican lawmakers in the state filed an emergency petition with the U.S. Supreme Court to try and overturn the ruling. Some legal experts doubt the Supreme Court will ultimately take the case, arguing that they would eschew the politics involved. But Trump said during the debate he was relying on the Supreme Court “for the ballots,” generating further alarm among legal experts and Democrats.

This anxiety was evident on Tuesday, as Biden used his platform on to try and urge the American people that that the best remedy to counteract such uncertainty is to vote. “This is all about trying to dissuade people from voting because he’s trying to scare people into thinking it’s not going to be legitimate,” Biden said. “If we get the votes, it’s going to be all over. He can’t stay in power.” 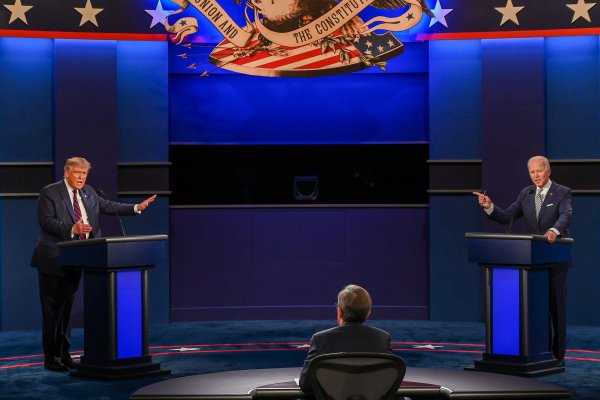 Shouting Over Each Other
Next Up: Editor's Pick