A majority of white women voted for Donald Trump: It’s the statistic that launched a thousand narratives. “You know, I got 52% with women,” President Donald Trump said at a press conference in late September, falsely conflating the figure for white women with the figure for women overall, whom he did not win. “Everybody said this couldn’t happen—52%.”

Trump is hardly the only one invoking the stat. The idea that a majority of white woman voted for Trump has become a meme ever since the 2016 election, featured in countless arguments that make sweeping claims about its meaning. In the President’s telling, the 52% stat refutes the notion that he’s unfriendly to women. To conservatives, it proves that Trump-hating liberal feminists are out of touch with what a lot of real American women believe. To liberals, it shows that white women are complicit in the sins of the patriarchy, perhaps because they benefit from access to its spoils.

There’s just one problem with this statistic: It’s probably not true.

The idea that 52% of white women voted for Trump—compared to 43% who supported Hillary Clinton—comes from the 2016 exit polls, an in-person survey in which Election Day questioners ask people at polling places across the country how they voted, then adjust the results to match the actual tally reported by election authorities. But exit polls, which are conducted by Edison Research for a consortium of news organizations, suffer from systemic biases and are notoriously flawed.

Exit polls tend to overrepresent the kinds of people who are likely to stop and agree to talk to a pollster, and underrepresent the ones who don’t. They’re also conducted on the fly, attempting to snapshot the electorate in real time, so they’re naturally not going to be as accurate as an analysis that combs through voter files and other data that show who actually turned out. (Ironically, the thing the exits are worst for—determining the demographic breakdown of the electorate—is the thing they’re most often cited to illustrate.) Later, more careful analyses have corrected many of the exits’ snap judgments, busting many myths about the election along the way.

The 52% statistic appears to be one of those myths. According to a later analysis that experts consider more reliable, a study published in August by the Pew Research Center, the percentage of white women who voted for Trump was actually 47%, compared to 45% for Clinton. That’s still a plurality, and still makes white women more Trump-positive than the overall electorate, which supported Clinton by a 48%-46% margin. White women, who will again be a critical demographic group in the 2018 midterms, were considerably more pro-Trump than nonwhite women, who went for Clinton by a huge margin, 82%-16%. But it’s essentially a tie, which makes for a very different story than a 9-point margin for Trump.

How do we know the exit polls were wrong overall? In 2016, there were a few obvious clues. The exits said 50% of the electorate was college-educated, but for that to be true, 97% of all college graduates in America would have to have voted—an absurd idea. The exits also claimed that voters under 30 made up a larger share of the electorate (19%) than voters over 65 (16%), something experts consider similarly implausible based on demographics and history.

With additional time, it’s possible to get a more accurate picture using public voting records and other data, which can take months after the election to become available. The Pew report matched these records with a survey conducted in November 2016, just after the election, to create what it called “a detailed portrait of the electorate.” This portrait depicts a voting population that is older, whiter and less educated than the exit polls would have you believe. College graduates were just 37%, rather than half of voters. Voters over 65 made up 27% of the electorate—more than double the share of under-30 voters, 13%. And while the exits showed Trump winning college-educated whites by 3 points, Pew found he actually lost them by 20.

The exits also overstated women’s support for Trump, according to Pew’s research. Overall, the center found, 39% of all women voted for Trump, while 54% supported Clinton. White women, who made up 41% of the electorate, went for Trump by a 2-point margin, 47% to 45%, but neither candidate got a majority of their votes. Trump won 35% of college-educated white women and 56% of white women without college degrees. “Most of the differences with the exit polls originate in the composition of the sample,” Carroll Doherty, Pew’s director of political research, tells TIME.

These flaws in the exit polls have led to flaws in the way 2016 has been interpreted by analysts and political strategists, as the New York Times’ Thomas Edsall pointed out. Edsall argues that Pew’s study shows that Democrats must continue to appeal to working-class whites. Similarly, the error in women’s voting preferences has produced grand narratives based on the 52% figure.

But in statistical terms, the difference between 52% and 47% is insignificant—likely small enough to have resulted from routine sampling error. “The differences aren’t that dramatic; it’s more the importance that has been attached to that number,” Doherty says. “There is a narrative that was created around the 52% that has continued to this day.” Rather than make new stories based on new numbers, we should accept what both the exit polls and the Pew study really show: when it comes to Trump, white women were simply divided. 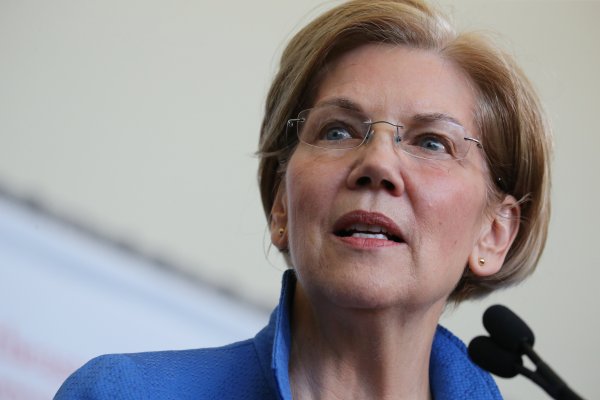 Can Elizabeth Warren Use Transparency to Beat Donald Trump?
Next Up: Editor's Pick