We are heading into the final four weeks of the 2020 campaign and we are already starting to consider what The Day After will look like. It seems highly likely at this point that when we all wake up on the morning of Wednesday, Nov. 4, we still won’t know who won the White House. We might not even know how many people cast ballots, when those votes will be counted or what states’ results will head to courts.

This uncertainty doesn’t mean the system is broken, even if President Donald Trump remains in the hospital with COVID-19. A lag in results and an incumbent’s health issues, however serious, won’t upend 244 years of democracy. If you can wait in line for an Impossible Burger, you can stand by for an accurate tally. If you can queue in line for a driver’s license, you can hold for a medical update amid an unprecedented pandemic. In a year that has defied convention and tested our patience, why should we expect one of the nastiest elections in U.S. history to wrap up with a neat bow tied around it?

While the President of the United States has persistently stoked fears about voter fraud and electoral meltdown, that is likely overblown. In 1968, America endured racial unrest, an unpopular war in southeast Asia, the assassination of two liberal icons and constant election pestering from Moscow — and then in January of 1969, power was peacefully passed to Richard Nixon. America may feel like it’s burning — and, in the West, it is — but the system has guardrails built in for such moments.

Despite the anxiety-inducing uncertainties, we have some idea of the different ways things could play out come November. Today, we’re going to outline the three main scenarios. As the week unfolds, we’ll unpack each of them with more detail so you can familiarize yourself with what is possible, what is not, and why this unusual moment is not the end of the republic.

SCENARIO: A CLEAR BIDEN WIN. If the polls prove accurate and steady, Biden is on track to return to the White House, but this time trading the V.P. suite overlooking West Exec’s alley for the Oval Office. Projections show him with constant advantages over Trump, but not by enough for Democrats to feel as cocky as they did in 2016. Nate Silver, the polling whiz, still puts a Trump win as a one-in-five chance. (In 2016, he had a Trump victory at slightly better odds.)

If Biden prevails, it is likely to unfold one of two ways. The first, which is possible but not plausible, is that he is running so far ahead of Trump in places like North Carolina and Florida that elections analysts won’t have to wait for results from Colorado or Arizona to call the race on Election Day. If the campaign unfolds as a Biden blowout, Ohio and Iowa would be padding to a landslide, not hinges that may take days to know how they swung. The second scenario may have Biden reaching the 270 electoral vote threshold as dawn rises, and those last votes from Colorado and Arizona are loaded into the electoral systems.

SCENARIO: A CLEAR TRUMP WIN. Then there is the other clear outcome, one in which all of the public polling is wrong, with voters secretly harboring an affinity for the President but not telling pollsters for fear of being shamed, and his campaign — despite running on fiscal fumes — pulls off a sequel to his 2016 upset. If this were to happen, it could neuter Trump’s doubts about the election’s integrity and his coded permission for his thuggish allies to “stand by” for orders.

And before you say there’s no way Trump — whose 53% disapproval rating ranks him above all but two of the last 10 presidents to serve as long as he has — consider the predecessors he bests. Trump is running ahead of Jimmy Carter and George H.W. Bush when they were unsuccessfully seeking second terms, meaning he’s not necessarily stuck in a glidepath to an exit. So don’t count on Trump’s low approval rating to necessarily translate into votes against him.

SCENARIO: IT’S NOV. 4, AND WE DON’T KNOW WHO HAS WON. The third scenario is more of a sliding scale of uncertainty than a single destination. Let’s call this one The Spasm. We know votes were cast. We know elections officials are working to count them. Maybe one candidate is pulling ahead, maybe not. But there are days or weeks between the morning after Election Day and knowing who our next President is.

This scenario offers a broad spectrum of uncertainty with a wide selection of variables. The biggest question mark is what would happen should the President be incapable of serving a second term, rendering his role atop the ticket moot. For that, there is no precedent. More likely, it could include voting irregularities that, while embarrassing, don’t negate the results, or systemic voting failures, either through American error or foreign hacking. We could see predictions of once-a-century participation curbed by voter suppression and intimidation, fear of illness or violence, indifference based on exhaustion toward the entire political process. We could also see a surge of voters overwhelming the system, as anecdotes are showing already. The postal service is an unexpected elections administrator now that mail-in voting has taken off as a health service.

A very real scene may be Biden pulling ahead on election night, but not decisively, and both Biden and Trump send loyal lieutenants to tell supporters to get some rest and the work of counting continues in the morning. In this Biden-ahead-but-unknown-winner scenario, the risk to democracy is that Trump barrels forward and declares victory or, maybe more damaging, that the election results are illegitimate. That kind of chaos would play directly into the hands of democracy’s enemies, but don’t expect that to hamper the President’s love of a good show. As in 2016, Trump has refused to pledge to accept the results and says it depends on if he wins or not. It’s dangerous hyperbole, but not destiny.

Any of these variables could end up being fought in court by either side, a process that could go all the way to the Supreme Court as it did in 2000. It’s fair to say that Trump is no Al Gore, who urged restraint among his supporters as the nation’s highest court sided with Bush’s legal team and handed him Florida and, with it, the White House.

We also could have a scenario where, in the end, the loser refuses to concede. Biden has said he will concede if he loses; Trump has refused to make that promise, despite being asked by reporters directly several times. That would be a kind of tacit permission to protest, sparking the tinder that the President has been collecting since before he took office. Any civil unrest in this worst-case scenario is likely to be a spasm of violence, rather than something protracted. But maybe we just don’t know how to work a fire extinguisher of temperance anymore.

Like I said, this is a spectrum and by no means a guarantee — and if we are patient and believe, the system will work the way it’s designed to. 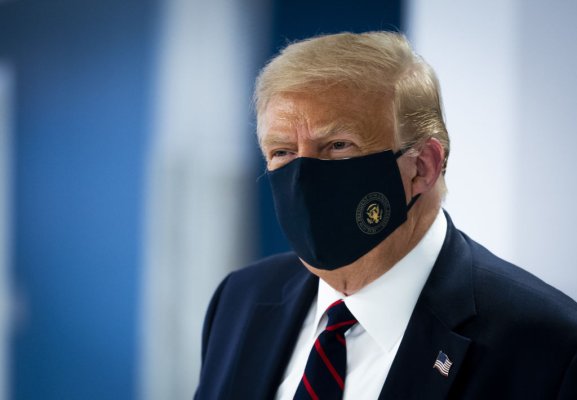 A Presidential Coronavirus Diagnosis Is On-Brand for 2020. Don’t Panic.
Next Up: Editor's Pick