‘This Resets the Race.’ Why Trump’s Move to Fill the Supreme Court Vacancy Raises the Election’s Stakes

Supporters thronged the steps of the court Sept. 21 for an impromptu vigil honoring the late Justice
Lenin Nolly—SOPA Images/Shutterstock
By Molly Ball

There are many theories about why Donald Trump won the presidency, but Mitch McConnell gets some of the credit. In February 2016, Supreme Court Justice Antonin Scalia died, paving the way for then-President Obama to replace him with a jurist who would pull the court left. Trump had not yet wrapped up the GOP nomination, and many conservatives were skeptical of the former Democrat. McConnell, the Senate Republican leader, refused to hold hearings on Obama’s court nominee, arguing the winner of the election should fill the seat.

Democrats deplored the obstruction and predicted voters wouldn’t tolerate it. But the judicial opening was a profound motivator for conservatives—especially after Trump, in a novel move, issued a list of conservative jurists from which he said his nominees would be selected. In exit polls, 1 in 5 2016 voters said the Supreme Court was their top issue, and 56% of those supported Trump.

Four years later, the death of liberal icon Ruth Bader Ginsburg has given Trump and McConnell an opportunity to pad the court’s conservative majority. But the political consequences are less obvious—and the procedural shoe is on the other foot. Though Ginsburg reportedly expressed a dying wish that she not be replaced until “a new President” takes office, McConnell waited just over an hour after her death became public to announce that the Senate would vote on Trump’s nominee. All but two GOP Senators quickly fell into line, their past objections to election-year appointments suddenly forgotten. Trump plans to name his pick on Sept. 26, less than six weeks before Election Day, with voting already under way.

The last-minute court fight ratchets up the drama and stakes of this fractious election year. Democrats and Republicans alike believe the court could again be a decisive issue in the presidential race. But the implications go far beyond who wins in November. If Republicans succeed in confirming Trump’s nominee, six of the court’s nine votes will be in conservative hands. In the coming months alone, the new Justice could be a deciding vote on pending cases to strike down the Affordable Care Act and allow faith-based charities to deny services to same-sex couples, as well as a flurry of emergency election-related cases. In the coming years, cases on abortion, affirmative action, immigration, voting rights and other key issues are likely to reach the court’s docket.

One legacy of the battle over Ginsburg’s seat may be the blow it inflicts on the institution. “There’s certainly enough blame to go around over the past two decades on this issue,” as both Democrats and Republicans have sought to manipulate court appointments to their advantage, says former Republican Senator Jeff Flake, a Trump critic. But Republicans jamming a last-minute Supreme Court nomination through the Senate “would escalate it even further. And if we get to a point where there’s court packing or anything else, then that is real, long-term damage.”

A President elected with a minority of the vote, backed by Senators representing a minority of the public, using procedural hijinks to cement a judiciary that will shape American life: to many, the prospect amounts to a subversion of democracy and a clear sign that the structures of government are badly broken. Some Democrats, including prominent elected officials, say that if their party wins the White House and Congress, they should make big changes: eliminating the Senate filibuster; adding Washington, D.C., and Puerto Rico as states; and expanding the size of the Supreme Court, adding two or more additional Justices to compensate for the ones “stolen” from their party—ignoring the squawks of the GOP just as Republicans ran roughshod over them. In the meantime, Democrats are girding for the nightmare scenario, in which the unelected court installed through minoritarian means is called upon to resolve a disputed 2020 election—and hands a second term to a President who never once won the popular vote.

In the hours after Ginsburg’s death, the steps of the Supreme Court became an impromptu memorial. Flowers and candles mingled with handmade signs as anguished liberals paid tribute to their heroine. Sadness mixed with a sense of panic. “It’s like the emergency light, right?” says Lauren Acker, a 29-year-old D.C. resident. “Anybody who believes that what we’re currently working with is not a functioning system of government, it is now, as it always has been, our responsibility to yell louder, fight harder and educate everyone we can.”

Within days, the online Democratic donor platform ActBlue reported processing $200 million in donations, shattering records. Democratic strategists predicted the court fight would energize their voters, underscoring the stakes for partisans who are not as enthusiastic about Democratic nominee Joe Biden as hardcore Republicans are about Trump. “Our game plan remains the same. And our game plan is: we take nothing for granted,” Tom Perez, chair of the Democratic National Committee, tells TIME.

Instead of signing on to divisive ideas like court packing, Biden cast the fight in terms of health care, which Democrats see as a winning issue. A week after Election Day, the Supreme Court is scheduled to hear a case brought by a group of Republican attorneys general, and backed by the Department of Justice, that could result in the elimination of the Affordable Care Act. “In the middle of the worst global health crisis in living memory, Donald Trump is at the Supreme Court trying to strip health coverage away from tens of millions of families and to strip away the peace of mind from more than 100 million people with pre-existing conditions,” Biden said.

The political valence of the court has shifted since 2016, making it as much—or more—of a galvanizing force on the left as it has long been on the right. A recent CNN poll found 47% of Biden supporters considered the Supreme Court “extremely important,” compared with 32% of Trump supporters. In 2018, the bitter fight over the nomination of Justice Brett Kavanaugh on the eve of the midterm elections may have helped power Democrats to the House majority.

This year, the court vacancy may shape the race for the Senate, where Republican control is at risk. Senator Susan Collins of Maine already faced her constituents’ ire for her crucial vote to confirm Kavanaugh, which tarnished her brand as an independent-minded Republican. Within a day of Ginsburg’s passing, Collins said she did not believe the Senate should vote on a replacement prior to the election. Senator Lisa Murkowski of Alaska, a frequent Trump critic who is not up for re-election this year, joined Collins in opposing a pre-election confirmation vote.

But other GOP Senators calculated they had more to lose by disappointing their own partisans than they might gain by sticking to the precedent set in 2016. Senators Cory Gardner of Colorado, Martha McSally of Arizona, Joni Ernst of Iowa, Thom Tillis of North Carolina and Lindsey Graham of South Carolina, each facing a tough re-election fight, all quickly supported McConnell’s gambit, waving away charges of hypocrisy. (“I want you to use my words against me,” Graham said in 2016. “If there’s a Republican President … and a vacancy occurs in the last year of the first term, you can say Lindsey Graham said, ‘Let’s let the next President, whoever it might be, make that nomination.’” The clip is now airing in TV ads.) The Senators sought instead to use the nomination to rally Republican voters behind them.

At Trump’s rallies, a new chant emerged: “Fill that seat!” Republicans predict the court battle will shift attention from Trump’s mishandling of the COVID-19 pandemic and its economic toll. “This helps Trump, and it helps Republican Senate candidates,” GOP donor Dan Eberhart argues. “We are not running solely on the COVID response and the economy anymore—this resets the race.” A White House official predicts the fight will heighten the volatile atmosphere in a country already contending with a pandemic, a recession, racial justice protests and natural disasters. “You think what a full-on war Kavanaugh was,” the official says. “It’s going to be like that times 1,000.”

Trump is trailing in the polls and has few legislative accomplishments to his name other than his 2017 tax cut. Key promises—a border wall, a health care plan, an infrastructure bill—remain unfulfilled. Seeing this, McConnell began telling confidants that he was in the “personnel business”; the massive number of judicial appointments he’s pushed through the Senate have become the accomplishment he touts. Trump may lose the presidency, McConnell may lose the Senate—but the judiciary they shaped will outlast them both. That, in the end, may be the only electoral calculation that matters. 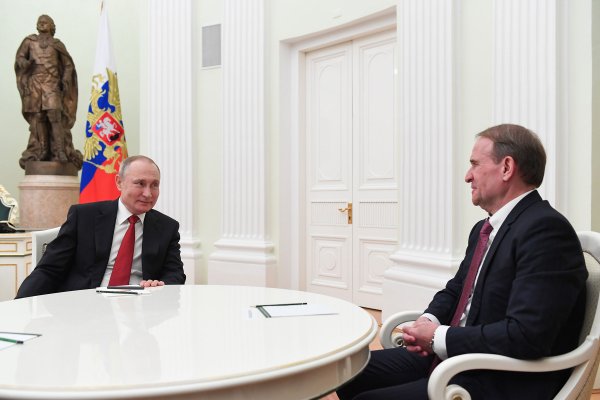 Russia Back Channel Bid to GOP Biden Witness
Next Up: Editor's Pick