The sun rises behind the US Supreme Court the morning after the death of Supreme Court Justice Ruth Bader Ginsburg on September 19, 2020 in Washington, DC.
Samuel Corum—Getty Images
By Brian Bennett and Tessa Berenson

President Trump has said that a major factor in the 2016 election was his promise to nominate a conservative justice to fill an open Supreme Court seat. He’s named two justices so far as President, shifting the court’s center of gravity to the right for a generation. Now, after the death of the powerful liberal Supreme Court Justice Ruth Bader Ginsburg on Friday, Trump faces the chance to name a third justice to the court.

And that, say some Republican supporters, may animate Trump voters at a moment when he is trailing former Vice President Joe Biden in the polls.

Having the conversation shift for the next two months to include a Supreme Court nominee “helps Trump and it helps Republican Senate candidates,” says Dan Eberhart, a Republican donor. The news cycles have been dominated by Trump’s mishandling of the pandemic and the economic toll of the shutdown. That changes now. “We are not running solely on the COVID response and the economy anymore—this resets the race,” Eberhart says.

The Republicans may be right. The make up of the Supreme Court motivates voters of both parties, but if 2016 is any guide, it motivates Republican voters more. When Trump won, national exit polls showed that 21% of voters described the Supreme Court appointment as “the most important factor,” and those votes broke for Trump.

Senate Majority Leader Mitch McConnell has already ensured the Supreme Court pick will be front of mind for voters. Within hours of the announcement of Ginsburg’s death, McConnell released a statement saying he would move forward whenever Trump names a nominee, even though the country is within two months of an election. “President Trump’s nominee will receive a vote on the floor of the United States Senate” McConnell said in the statement Friday night.

McConnell refused to allow President Obama’s nominee Merrick Garland to come to a vote when Garland was put forward in March 2016 after the death of Justice Antonin Scalia, eight months before the 2016 elections. McConnell didn’t specify whether he would hold a vote on Ginsburg’s replacement before Nov. 3 or during the lame duck session between the election and the inauguration in January.

Whatever the timing of a floor vote, the vacancy on the court comes at a fraught moment. Trump is already falsely claiming that the use of mail in ballots will result in widespread fraud, and if the outcome of voting in any states goes up to the Supreme Court, as it did during the contested 2000 election between Al Gore and George W. Bush, the sitting roster of the court could decide who is the next president.

Trump seemed unaware of Ginsburg’s passing as he took the podium at a rally in Bemidji, Minn. just as news broke of her death. But he understands the stakes. During his nearly two hour riff, Trump blasted Biden and played up the number of conservative judges he’s named. “The next president will get one, two, three or four Supreme Court justices,” he said, noting that he had put Senator Ted Cruz on the list of potential Supreme Court nominees he released earlier this month.

One of Trump’s political innovations in 2016 was the decision to release a list of potential Supreme Court nominees, reassuring conservatives that he would work to bend the court to the right. Earlier this month, Trump repeated the tactic, updating the list of people he would consider for possible future Supreme Court vacancies, including Cruz, Senator Josh Hawley of Missouri and Senator Tom Cotton of Arkansas.

Friday night, Cruz went on Fox News to say Trump should nominate a successor to the court “next week” and that he wants to see the Senate take up and confirm a new justice before Election Day. “This nomination is why Donald Trump was elected,” Cruz said.

A Supreme Court fight two months before election day, during a pandemic, and in the midst of racial justice protests, devastating fires and a dangerous hurricane season, will only heighten the tension already mounting in the country. Trump’s nomination of Brett Kavanaugh to the court was wrenching, as the Senate grappled with testimony about an alleged sexual assault by Kavanaugh when he was a teenager. “You think what a full-on war Kavanaugh was. It’s going to be like that times 1,000,” a White House official said. “This is another variable in this crazy mix of 2020.”

—With reporting by Alana Abramson 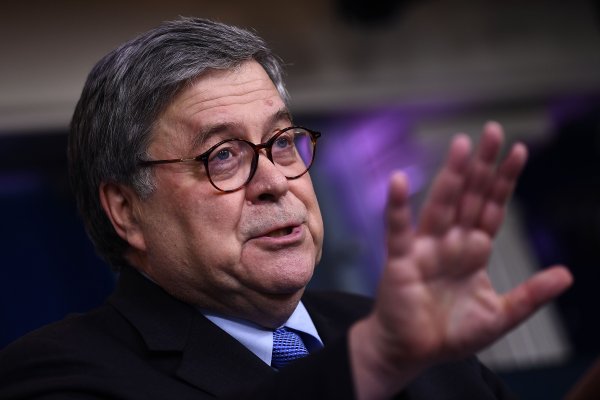 How Attorney General Bill Barr Controls the End of John Durham's Investigation
Next Up: Editor's Pick