A woman wearing a mask writes a message in chalk in front of a painting of the late Associate Justice of the Supreme Court Ruth Bader Ginsburg on Sept. 19 in New York City. Ginsburg died on Sept. 18.
Alexi Rosenfeld—Getty Images
By Abigail Abrams

Health care was already a major focus in this fall’s election, but the death of Justice Ruth Bader Ginsburg on Friday adds a new layer of urgency to the issue: the Supreme Court is set to hear a lawsuit challenging the constitutionality of the Affordable Care Act (ACA) on Nov. 10, exactly one week after Election Day.

Ginsburg voted to uphold the law in the past, along with the Court’s other liberal justices and Chief Justice John Roberts. With all of those justices still in place before Friday, most in Washington had assumed that this latest case would end the same way, with a split vote preserving Obamacare. But now that Ginsburg’s seat is vacant, the future of the ACA—and the health coverage it provides millions of Americans—is suddenly in question.

“Before Justice Ginsburg died, this lawsuit had almost no chance of going anywhere,” says Nicholas Bagley, a law professor at the University of Michigan who specializes in health law. “And after she died, the odds of the Affordable Care Act getting struck down are much higher than they were.”

But, Bagley and other experts caution, it’s hardly a done deal. While Ginsburg’s absence tilts the Supreme Court toward the conservative majority, the case against the ACA is legally questionable. It’s possible that at least two conservative justices could vote to protect the law; it’s also possible that SCOTUS delays the case until it can be heard by nine justices.

A more immediate question, political strategists say, is how this new threat to the ACA shapes the outcome of the Nov. 3 election. After all, the possibility of the Court overturning the ACA could have catastrophic consequences for tens of millions of Americans. The insurance marketplaces would be eliminated; the expansion of Medicaid in 38 states and D.C. would be voided; and the law’s most popular provisions, including those protecting people with pre-existing conditions from being denied insurance or charged higher rates, would disappear. Estimates indicate that between 53.8 million and 133 million—or 51 percent of all Americans—have a pre-existing condition that could make them uninsurable if the ACA were no longer the law of the land.

That threat already appears to be motivating Democrats and reshaping the presidential race with a renewed focus on the future of American health care.

What the lawsuit is about

The case before the Supreme Court in November, California v. Texas, was initiated by a group of Republican state attorneys general and is backed by the Trump Administration’s Justice Department. It alleges that when the Republican-controlled Congress in 2017 zeroed out the tax penalty for people who don’t buy health insurance, that rendered unconstitutional the ACA, in its entirety.

The legal reasoning draws from a previous, 2012 case against Obamacare, in which the Supreme Court upheld most of the law on the grounds that the tax penalty, known as the “individual mandate,” was a constitutionally sound tax. Now that the penalty is at zero, the new lawsuit argues, it’s not actually a tax, which means it’s not constitutional and the whole law should be thrown out. Many legal scholars believe this argument will not hold up in front of the high court.

That’s not a partisan opinion: legal scholars on both sides of the aisle have cast doubt on every part of this case from its inception. Jonathan Adler, a libertarian law professor at Case Western Reserve University who was a driving force behind the 2015 challenge to the ACA, has called the case “absurd,” and told TIME on Sunday that he expects several of the conservative justices to disagree with the Republican state officials.

“This case, unlike in prior ACA cases, is not grounded in jurisprudential concerns that have traditionally motivated conservatives,” Adler says. “I did not think that this suit would be ultimately successful in the Supreme Court before Justice Ginsburg’s passing and I still don’t think it will be.”

What the Supreme Court could do

Despite scholars believing the case is legally weak, it worked for conservative federal district court judge, Reed O’Connor, who ruled in December of 2018 that the whole ACA is unconstitutional. The U.S. Court of Appeals for the 5th Circuit then agreed that the individual mandate is unconstitutional, but sent the case back to O’Connor to examine whether other parts of the law could stay or be “severed.”

Now that the case is at the Supreme Court, there are still a number of possible outcomes.

Trump has said he will nominate a new judge to replace Ginsburg this week, and Senate Majority Leader Mitch McConnell has vowed to hold a vote on the nominee. Oral arguments for the ACA case are scheduled for Nov. 10, and while the Senate could theoretically hold hearings and confirm a new justice by then, that’s a rapid timeline.

If the Court hears the ACA case with just eight justices, the three liberal justices who are expected to uphold the law will need to find two more to join them since they will not have Ginsburg’s vote on their side. Most experts think Roberts will likely vote to uphold the ACA as well since he has opted not to strike it down in the past when cases brought stronger legal arguments. And if other conservative justices agree the case is weak, they could uphold the law, too.

Another way that the ACA remains intact is if the Court agrees with the Republican states that the individual mandate should go, but rules that the rest of the ACA can stay. That would preserve the status quo, including protections for people with pre-existing conditions, the health insurance marketplaces and subsidies, and Medicaid expansion.

Justice Brett Kavanaugh, Trump’s last appointee, may embrace this approach, experts say. He has a history of making arguments in favor of a legal concept called “severability,” which means that even if one part of a law is invalid, other portions can still stand. As recently as this summer, he authored an opinion, joined by Roberts and conservative Justice Samuel Alito, that said the Court “presumes that an unconstitutional provision in a law is severable from the remainder of the law or statute.”

Roberts has also supported severability in the past, and Adler says it’s not clear that even Justice Neil Gorsuch and Justice Clarence Thomas would disagree on that principle.

Some experts see another clue in Kavanaugh’s time on the D.C. Circuit Court. In 2011, he heard a case challenging the ACA’s individual mandate and, at the time, he argued that the court had no right to decide the case due to his interpretation of an 1867 tax law. “He did not take the opportunity to cast a vote against the Affordable Care Act’s constitutionality,” Bagley says. “Although he is very conservative, he may not be a fire breather in the way that some of his colleagues are.”

Still, predicting what any justice will do is difficult. If Roberts sides with the liberal justices, but no other conservatives move, the Court could end up with a 4-4 tie. That would mean the 5th Circuit ruling stands, and the case would ultimately go back to O’Connor, the district judge who ruled the law unconstitutional, to decide which parts of the law can remain. There would likely be more appeals and the case could wind up back at the Supreme Court months or even years down the line.

To avoid that possibility, Roberts could push back the hearing or even call for a rehearing when nine justices will be on the bench.

What this means for the election

In the meantime, with the ACA ruling looming, Democrats have sprung into action. In the 24-hours after Ginsburg’s death on Friday, Democrats raised more than $71 million as politicians, activists and voters pledged to redouble their efforts to get rid of Trump on Election Day. Vice President Joe Biden, who has already been campaigning on expanding access to health care and controlling the coronavirus pandemic, also focused his attention on the ACA in appearances over the weekend.

“In the middle of the worst global health crisis in living memory, Donald Trump is before the Supreme Court trying to strip health care coverage away from tens of millions of families, to strip away the peace of mind of more than 100 million Americans with pre-existing conditions,” Biden said in a speech on Sunday.

And while court battles have traditionally been seen as bigger motivators for Republican voters than for Democrats, party leaders say the ACA—and the issue of health care, which tends to affect people personally—may change that. Guy Cecil, who leads one of the largest Democratic super PACs, Priorities USA, tweeted that internal polling showed the Supreme Court was the second most motivating issue only after defeating Trump.

The Democratic Congressional Campaign Committee has internal polling showing that voters in both conservative and liberal Congressional districts find health care one of the top convincing messages from Democratic candidates. The party successfully campaigned on the idea of preserving health care in the 2018 midterms, and while the Supreme Court shakeup changes the specifics, they are again hoping to capitalize on an issue they know works.

“A lot of the campaigns were already debating health care. But the risks of people’s healthcare just went from a policy concern in a think tank to a clear and present danger for families across the country,” Democratic strategist Jesse Ferguson said. “It’s no longer theoretical. It’s now an actual threat.” 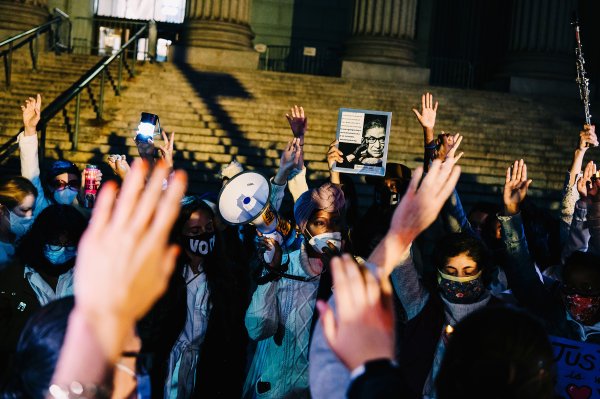 'The Energy Is Unbelievable.' RBG's Death Motivates Dems
Next Up: Editor's Pick