Speaking to a packed airplane hangar in Dayton, Ohio on Monday, President Trump amped up the historic significance of his Supreme Court pick expected this weekend. “When you become President they say this is the single most important thing a president does,” Trump said to chants of “Fill that seat!”

“It will be a brilliant person. It will be a woman,” Trump continued. A man in the crowd shouted, “Amy Barrett!” Cheers went up.

Trump often turns to rally crowds to gut-check his political instincts, and the Ohio rally highlights the momentum behind Judge Amy Coney Barrett, who is considered by sources close to the process to be the favorite to be Trump’s nominee to fill the seat of Justice Ruth Bader Ginsburg, who died Sept. 18. As Trump prepares to announce his choice on Saturday, White House officials are weighing how a pick could provide a remedy to Trump’s national poll deficit or give him a boost in key states. The political map may not be the top consideration in determining who Trump nominates to a lifetime position on the nation’s highest court, but his campaign is hoping the pick will assure wavering Republican voters to put doubts about the President aside. “It takes the subject off of COVID, it got him talking about his prerogatives in power, and it also gets people focused on why they voted for him in the first place,” says a former White House official.

The two top contenders are Barrett and Judge Barbara Lagoa, but Barrett is the current favorite, sources familiar with the White House’s deliberations tell TIME. Barrett’s electoral advantage for Trump may be less about helping him win key states or demographics and more about boosting enthusiasm and turnout among social-conservative supporters. “If Trump wants to fire up his base, they’ve definitely heard of Amy Barrett,” says a person familiar with the selection process.

Barrett clerked for the late conservative Justice Antonin Scalia and was a law professor at the University of Notre Dame. She has stated publicly her belief that life begins at conception, argued that justices should overturn Supreme Court precedent when they disagree with it, and wrote in a 1998 article that judges shouldn’t need to rule in ways that contradict their religious beliefs. Barrett’s religious views came under scrutiny during her confirmation hearing in 2017 for her spot on the Seventh Circuit. “The dogma lives loudly within you,” Democratic Senator Dianne Feinstein of California told Barrett in a dramatic exchange that went viral and made the judge a household name among Fox News viewers.

“The pro-life community loves her,” says Mike Davis, president of the Article III Project, an organization that works to support Trump’s judicial nominees.

When asked about the political considerations entwined in the nomination, Tim Murtaugh, communications director for the Trump campaign, replied with a statement that listed abortion first among the top issues at stake in the choice, followed by religious freedom. Some Republican senators are enthused by the prospect of Trump naming Barrett. Sen. Josh Hawley of Missouri has said he’d only support a nominee who believes the landmark abortion decision Roe v. Wade was wrongly decided, and he indicated this week he believes Barrett meets his standard.

But there may be political advantages to picking Lagoa too. The Eleventh Circuit judge is the daughter of immigrants, a Cuban-American woman born in Miami and boasting deep-rooted ties to the Cuban community in Florida. Twenty years ago she worked on the pro-bono legal team representing relatives of Elián González, the Cuban boy who found himself at the center of a political maelstrom when he was returned to his father in Cuba after his mother drowned trying to escape with him to the United States. Lagoa was the first Hispanic woman to be a Justice on the Supreme Court of Florida. “She has a significant contingent of support in Florida, both politically and legally,” a source familiar with the process says. Her compelling personal story is a point of emphasis in discussions about whether to choose her for the Supreme Court, two sources familiar with the process say. “People on the campaign like Lagoa more for what she does on the edge. She’s Florida, she’s Hispanic, that could help beyond Florida in states that are critical,” says the former White House official.

Trump won Florida in 2016, but is now trailing former Vice President Joe Biden there by about 1.5 points, according to a Real Clear Politics polling average. Trump’s paths to the presidency shrink dramatically if he doesn’t carry Florida’s 29 electoral votes. The Trump campaign is undertaking a concerted effort to woo Latino voters in Florida and nationwide, and some allies think choosing Lagoa could help him with that coveted demographic in one of the nation’s most important states. “It would be the biggest political event for folks in Little Havana since the Bay of Pigs,” Brian Ballard, an influential Florida lobbyist with close ties to Trump’s inner circle, says of a Lagoa nomination.

Lagoa doesn’t have as fulsome a record as Barrett on hot-button political issues, which worries some Republicans. A conservative jurist, she explained to the Senate Judiciary Committee last year that her belief in originalism— interpreting the Constitution based on the original meaning of the writers, an interpretive method championed by Scalia—is closely tied to her Cuban heritage. “If we are not bound by what the Constitution means and it is ever changing, then we are no different than the country that my parents fled from,” she said. “Because Cuba has a constitution and a bill of rights and it means nothing.” In written answers during her confirmation process to the Eleventh Circuit, Lagoa said Roe v. Wade is “binding precedent” and that she would “faithfully apply this precedent and all other precedents of the Supreme Court.”

While this Supreme Court confirmation fight is set to be a bitterly partisan battle, Lagoa was confirmed to the Eleventh Circuit by a much wider bipartisan margin than Barrett was to the Seventh Circuit. (Barrett was confirmed in 2017 by a vote of 55-43; Lagoa was confirmed last year, 80-15.) But progressive groups are ready to seize on Lagoa’s record this time around. “If she’s the nominee, Floridians will be in a better position than anyone to understand how her partisan approach would threaten things like access to health care and protections for people with preexisting conditions,” says Christopher Kang, chief counsel at progressive judicial advocacy group Demand Justice. Kang cites a recent instance in which Lagoa was in the majority of an Eleventh Circuit decision upholding a Florida law requiring former felons to pay court fees and fines before they can register to vote, which he calls a “21st Century poll tax.”

The immediate political considerations aside, many of Trump’s top advisers are most concerned with picking a stalwart conservative. Many conservatives believe former Justices David Souter and Anthony Kennedy and former Chief Justice Earl Warren—all nominated by Republican Presidents—didn’t stick to a hardline course during their lifetime appointments. And the knives are out for Chief Justice John Roberts, who was nominated by President George W. Bush. “I don’t think you pick a Supreme Court justice because you’re worried about a percentage of politics in a swing state,” says Ballard. “You have to look at your legacy, and you have to look at, are you sure this person will be a conservative 20 years from now?” 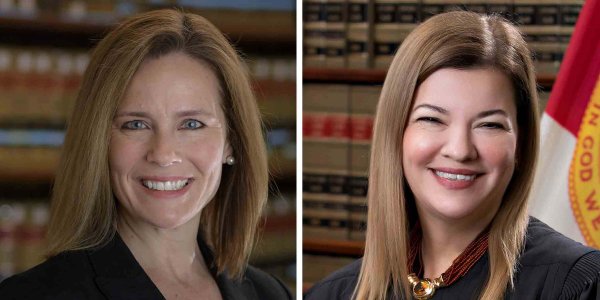 Trump's Top Candidates For Ginsburg's Seat
Next Up: Editor's Pick