The 2020 Emmys had to be different. Such is, of course, the reality for all awards shows right now. But the TV Academy’s annual self-congratulations ritual was begging for a revamp long before COVID-19 hit. Without a host to personalize the ceremony, the downbeat 2019 telecast drew just 6.9 million viewers—a 32% decline over the previous year. Another drop of that magnitude, and it might be hard to justify devoting three hours of Sunday-night airtime to a glorified industry event.

Hopefully, it won’t come to that. Because despite the unprecedented challenge—or, perhaps more accurately, because of it—this year’s Emmys turned out to be one of the most enjoyable awards shows in recent memory. That success wasn’t necessarily the result of any one big decision on the producers’ part. But many of the details worked well, from H.E.R.’s lovely rendition of “Nothing Compares 2 U” during the In Memoriam montage, to Jennifer Aniston frantically extinguishing a trash fire as part of a gag about sanitizing award envelopes—and then reappearing two hours later flanked by her Friends co-stars Courteney Cox and Lisa Kudrow. Bits by genuinely funny people like David Letterman (“Regis, I checked; you’re in the montage, buddy”) and Anthony Carrigan as Barry’s NoHo Hank (himself flimsily disguised as a U.S. postal worker) earned their laughs. Inviting essential workers to present a handful of awards could’ve come off as patronizing, but the show avoided schmaltz by actually letting them share their experiences. And clips of luminaries like America Ferrera and Lena Waithe speaking candidly on their early encounters with Hollywood was a welcome alternative to the usual guilty jokes about the industry’s racism and sexism from the obligatory white-guy host.

Read more: See All the Winners of the 2020 Emmys

Speaking of which: Jimmy Kimmel wasn’t an extraordinary host by any means, but he was certainly better than nothing. (If that seems like faint praise, it’s a whole lot more than I can say for Ricky Gervais at the Golden Globes this past January.) His mere presence throughout the evening brought much-needed consistency and enthusiasm to a telecast that, due to its far-flung nominees, could’ve felt scattered or low-energy. In fact, there was something kind of comforting about the very averageness of “Pandemmys” jokes aimed at easy targets like anti-maskers and Quibi (which Kimmel rightly identified as “the dumbest thing to ever cost a billion dollars.”) I mean, what feels more normal than an awards-show host doing just OK?

Anthony Carrigan in a bit as his 'Barry' character NoHo Hank during the 2020 Emmy Awards.
ABC via Getty Images—2020 American Broadcasting Companies, Inc.

Really, though, it was the winners who made the 2020 Emmy Awards special. It’s always heartening to see some of the best nominees take home trophies (or have the trophies delivered to their homes via interns driving Kias, as the case may be), particularly after the farce that was the Game of Thrones‘ atrocious final season winning top honors last year. And while there weren’t too many surprises on Sunday, Zendaya’s richly deserved Lead Actress in a Drama upset livened up the proceedings nicely.

As for the favorites that dominated the night—Schitt’s Creek in the comedy-series category, Succession in drama and Watchmen in limited series—each one fulfilled some vital function for Americans toughing out this pandemic year from our couches. And the acceptance speeches reflected how thoroughly the casts and crews understood what we were getting out of their work. Along with his gratitude, Succession creator Jesse Armstrong underscored his dramedy’s cathartic lampooning of the super-rich and mega-destructive with a torrent of “un-thank-yous” to Donald Trump, Boris Johnson and nationalist leaders around the world.

Watchmen honorees from Regina King to creator Damon Lindelof and writer Cord Jefferson leaned on the series’ most political moments, such as its wrenching depiction of the 1921 Black Wall Street Massacre in Tulsa, and urged viewers to take advantage of voting tools like Ballotpedia. I was especially moved by Supporting Actor in a Limited Series winner Yahya Abdul-Mateen‘s speech, in which he acknowledged that Watchmen was a story about white domestic terrorism and inherited trauma, before pointing out that “it was also about a god who came down to earth to reciprocate to a Black woman all the love that she deserved. He’d offer her sacrifice and support, passion, protection. And he did all of this in the body of a Black man.” Abdul-Mateen continued, “I’m so proud I was able to walk into those shoes.” He dedicated his Emmy to the Black women in his life.

Nothing captured our collective thirst for comfort, positivity and familial togetherness more than the Schitt’s Creek sweep, which had the show’s major players—gathered in masks and formalwear at a small, socially distanced party—accepting seven straight awards. The Canadian ensemble was humble as always, giving generous shout-outs to each other and fellow nominees they admired, such as Issa Rae. “The internet’s about to turn on me,” Daniel Levy, who co-created the comedy with his father and fellow Emmy winner Eugene Levy, joked after his third time at the mic. “I’m so sorry for making this political, but I had to.” Even when they kept their masks on, you could tell how thrilled the members of the fictional Rose family were for each other. (“I can’t believe that Eugene Levy and Catherine O’Hara are my friends!” exclaimed their TV daughter, Annie Murphy.) Maybe it got a little old hearing them reiterate that the show was a celebration of kindness and inclusivity, but those values could not have been more refreshing at a time characterized by isolation, anger and mourning. For a few minutes on Sunday evening, it was possible for millions of struggling people across the country to imagine ourselves as honorary Roses—punched in the gut by life but united by human decency and capable of finding their way back to something like normalcy, together. 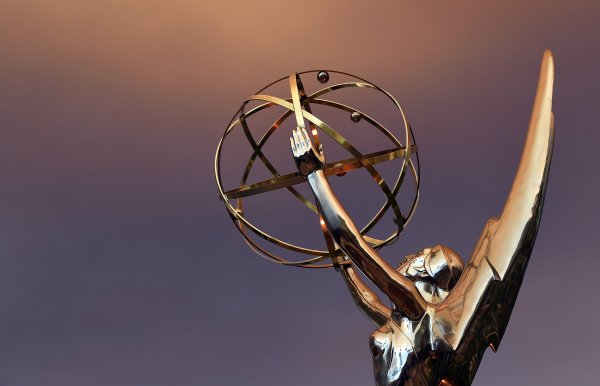 See All the Winners of the 2020 Emmys
Next Up: Editor's Pick