The 1918 Flu Pandemic Killed Hundreds of Thousands of Americans. The White House Never Said a Word About It

A nurse checking on a patient at the Walter Reed Hospital Flu Ward during the influenza pandemic, Washington, D.C., circa 1918.
Getty Images
By Melissa August

As the coronavirus outbreak continues to spread across the U.S., recent polls indicate dissatisfaction about the federal response to the pandemic: One Aug. 4 NPR/Ipsos poll found that two-thirds of Americans believe the U.S. pandemic response is worse than that of other countries.

Inherent in that response is what can often seem like a lack of coordination. In recent months, the White House has vacillated on mask-wearing, challenged the Centers for Disease Control and Prevention (CDC) guidelines on reopening schools, and ordered hospitals to send coronavirus data to the Department of Health and Human Services instead of the CDC. Then, on Saturday, amid stalled congressional talks, President Trump signed executive orders extending coronavirus relief even though the legality of such a move is in question.

But a look back at the influenza pandemic of 1918 reveals that a chaotic White House response to a public-health emergency is nothing new.

President Trump talks about the fight against COVID-19 as a war against an invisible enemy, but a little over 100 years ago, President Woodrow Wilson was fighting both kinds of war: the Great War in Europe was in its final stages as the flu pandemic swept the globe, including the United States. Wilson chose to focus on the battlefronts of Europe, virtually ignoring the disease that ravaged the home front and killed about 675,000 Americans. The 45th President has made inaccurate public statements about the coronavirus—last Wednesday, for example, Facebook removed a video in which President Trump claimed that children are “almost immune” to COVID-19—but, by comparison, the 28th president never uttered a single public statement about the 1918-1919 flu pandemic.

In terms of managing a federal response to the pandemic, “there was no leadership or guidance of any kind directly from the White House,” historian John M. Barry, author of The Great Influenza: The Story of the Deadliest Pandemic in History, tells TIME. “Wilson wanted the focus to remain on the war effort. Anything negative was viewed as hurting morale and hurting the war effort.”

Tevi Troy’s book Shall We Wake the President: Two Centuries of Disaster Management from the Oval Office, ranks Wilson as the #1 worst president in a disaster: “The federal response to the influenza outbreak in 1918 can best be described as neglectful. Hundreds of thousands of Americans died without President Wilson saying anything or mobilizing nonmilitary components of the U.S. government to help the civilian population.” He also faulted Wilson for contributing to the massive spread of the disease by continuing troop mobilizations “even as World War I was winding to a close.”

Wilson’s lack of leadership on the flu did not necessarily come from any ignorance of how serious the disease was. There were reports of illness striking young, healthy soldiers in military barracks and on troop transport ships where overcrowding and poor sanitation was rampant. While Wilson never issued a public statement about the illness, Barry believes the President had many conversations about the high numbers of ill and incapacitated troops at the front. According to Alfred W. Crosby’s America’s Forgotten Pandemic: The Influenza of 1918, Wilson asked Army Chief of Staff General Peyton March in October 1918 if he had heard of the popular jump rope rhyme parodying the virus, and recited part of it. (I had a little bird, / Its name was Enza / I opened the window / And in-flu-enza.)

First Lady Edith Wilson once delivered 1,000 roses to female war workers who had come down with the Spanish flu. A niece of the President’s apologized to him in a letter for failing to meet the Liberty Loan program quota due to social interactions being curbed because of influenza. Even two of the White House sheep that grazed on the front lawn were stricken but recovered.

White House staffers started to come down with the contagious virus in the fall as well. A private letter to Mississippi Senator John Sharp Williams was notable for being one of the very few times that the President ever spoke or wrote about influenza, and even that was just a passing reference to the bug that had struck the White House: “I would have answered your letter of October 14th sooner, had not my Secretary been absent with the influenza.”

People staffing the President continued to fall ill, including a Secret Service agent, the White House usher and a stenographer. The illness even followed when Wilson went to Paris to negotiate the Treaty of Versailles after the World War I armistice. A young American aide in the peace delegation, 25-year old Donald Frary, became ill with the flu and died.

Around the same time that Frary got sick, so did Wilson himself. Some newspapers initially reported that spring that the President had caught the flu over there, after he came down suddenly with a 103º fever, coughing spasms and gastrointestinal symptoms. Today, historians disagree about whether Wilson had the 1918 flu or a different strain. He recovered, but he suffered a stroke that fall that left him incapacitated for the rest of his term.

And it wasn’t just the White House. Federal and local health leaders downplayed the severity of the virus from the beginning. One could read in a local paper like the Arizona Republican that a Camp Dix health official reassured, “they have the epidemic under control.” Another paper advised the public don’t “get panicky.” Wilson-era health officials tried to keep morale high and energies focused on the war effort so they reassured the public that there was nothing to fear. U.S. Surgeon General Rupert Blue advised, “There is no cause for alarm if proper precautions are taken.” Colonel Philip Doane, the head of Health and Sanitation Section of the Emergency Fleet Corporation, which was charged with building a fleet of merchant ships, said this strain of flu was “nothing more or less than old-fashioned grippe.”

According to Barry, the surgeon general back then was a “master bureaucrat but failed to heed warnings of, seek advance information about, or prepare for the epidemic.” A scientist at the National Research Council working on medical matters regarding the war complained about not being able to get any information about the spread of the influenza in Europe from Blue’s office. And when the pandemic overwhelmed the Minnesota hospital system, Blue merely suggested, rather than required, that all public gatherings cease.

As historian Barry puts it, “There was no Anthony Fauci then.”

But there would have been no forum like the one that has made Fauci famous: Historians also note that presidential press briefings did not take place regularly back then. Nor was there as much of an expectation that the federal government would intervene to help Americans face something like the flu; overall, Washington played a much smaller role in people’s lives.

That dynamic would change dramatically in the next two decades, thanks especially to New Deal shifts that were spearheaded by President Franklin Delano Roosevelt—a survivor, no thanks to Woodrow Wilson, of the 1918 flu.

—With reporting by Olivia B. Waxman 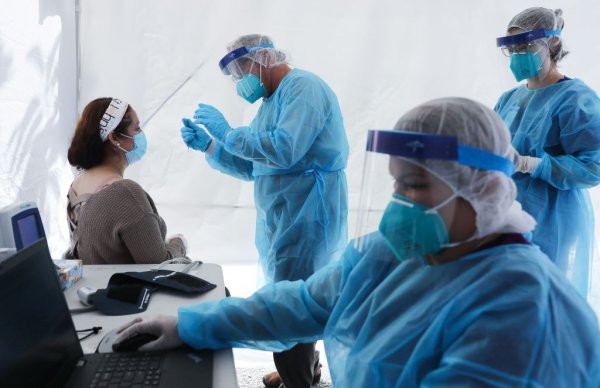 20 Million Cases
Next Up: Editor's Pick