The national emergency and consequent economic crisis triggered by COVID-19 has exposed one of America’s greatest needs: adequate and safe housing. After a period of decline, in the past three years homelessness has climbed — to 567,715 people as of 2019— and these numbers don’t even capture those who live in substandard or inadequate housing. But with unemployment insurance claims reaching 22 million in the month ending April 16, and even eviction moratoriums not fully protecting renters, the housing crisis in America is likely about to get far worse.

Some communities are rushing to organize ad hoc public housing for the homeless in trailers and RVs, gyms, hotels, fairgrounds, convention centers, tent cities and other similar venues. Proposed closures of jails and prisons, and the expulsion of inmates with no provisions to house them, threatens to expand the numbers of homeless. Advocates are predicting a catastrophic spread of COVID-19 among unsheltered Americans, particularly among single adults, who constitute the largest proportion of the homeless and who are reliant on the shelter system. But the Centers for Disease Control website offers no federal assistance in addressing COVID-19 among the homeless, who often live in close quarters and lack adequate health care, only encouraging local and state governments to seek “partnerships” through “coordination across local sectors.”

The current crisis is a reckoning, but it is not the first time American leadership has had to face this issue. Franklin Delano Roosevelt’s New Deal plan to pull the nation out of the Great Depression could provide today’s leaders with a model to draw from to prevent the worst from coming true.

Generally, Americans view housing as a privilege, something that is earned. But during the New Deal, President Roosevelt and his advisors embraced the idea that all citizens had a right to a safe, decent and stable home—and that, with local governments struggling with bankrupt budgets, massive unemployment and rapidly spreading poverty, it was the federal government’s obligation to provide shelter to Americans suffering economic misfortune.

Federal public housing programs grew out of New Deal legislation that was passed within the first one hundred days of the Roosevelt administration. Specifically, in June 1933, the Public Works Administration was directed to undertake relief projects to provide “low cost housing.” Subsequently, housing supported by federal dollars became a centerpiece of the New Deal. Federal public housing was seen as so important that Congress established the United States Housing Authority as a permanent division in 1937. It would eventually evolve into the Department of Housing and Urban Development.

The relief provided by New Deal housing projects is as relevant today as it was in the 1930s. Government contracts rescued builders and industries. In turn, they provided jobs to skilled and unskilled laborers. Completed projects offered affordable homes and apartments to struggling Americans.

Roosevelt was deeply committed to public housing. He warned that a failure to provide housing assistance would imperil the nation. In his State of the Union address in 1937, Roosevelt linked public housing with the public good and the preservation of the American system of government. “There are far-reaching problems still with us for which democracy must find solutions if it is to consider itself successful,” Roosevelt observed. “For example, many millions of Americans still live in habitations which not only fail to provide the physical benefits of modern civilization but breed disease and impair the health of future generations.” FDR’s unheeded words strike a chilling note today.

Roosevelt and his New Deal team saw the benefits of public housing to be multifold. Not only would federally sponsored housing elevate public health, it could shape communities. New Deal housing would incorporate public spaces where children could play and be educated. Community and recreational centers would uplift neighborhoods by providing training and encouraging exercise. Ideally (although not always in practice), the architecture of housing projects would be aesthetically appealing, which was regarded as essential to the emotional well-being of residents.

One of the most thoughtful and influential proponents of public housing was the brilliant, Harvard-educated economist Robert Weaver, who was among the first African Americans to join the New Deal in 1933. Weaver had grown up in an integrated suburb of Washington, D.C., and viewed public housing as more than simply shelter—he saw its potential for societal and economic reform. “The whole theory behind public housing is that the individual is affected greatly by his environment,” he wrote in 1938. “Not only does the person develop more fully if he is given better surroundings, but society benefits because a better citizen is produced.” Early on, Weaver protested against national policy that excluded people of color from federally funded housing programs. While his success in establishing integrated housing was limited, he envisioned public housing as not only raising the standard of living for all but also forging a nation based more genuinely on egalitarian principles.

Weaver would carry New Deal public housing philosophy into his later positions in city and state governments. In 1966, President Lyndon Johnson appointed him as the first Secretary of Housing and Urban Development and, with that, Weaver became first African American member of a White House Cabinet. He continually maintained that if any sector of American society were left behind economically, if they were denied good jobs and decent housing, it would forever threaten the nation’s financial stability.

While there are important lessons to be learned from the federal government’s successes in public housing, there were also blunders that serve as warnings. New Deal public housing required tenants be gainfully employed and as a result excluded the neediest Americans from shelter. Weaver was unable to compel the government to fully integrate housing projects, which only made segregation more deeply entrenched. The federal commitment to funding the maintenance of public housing gradually dried up after World War II, declining rapidly during the 1970s and beyond. Washington increasingly allocated more control over public housing to state and local authorities, who lacked the dedication to sustain projects. Furthermore, for the past 40 years, Washington has increasingly backed away from the New Deal’s commitment to proactively use federal intervention to protect American citizens.

Federal housing assistance became a missed opportunity. But now it has become an urgent necessity. If the projected economic impact of COVID-19 proves true, it will require bold and decisive action of the sort we have not seen since the Depression. As Robert Weaver once observed “You cannot have physical renewal without human renewal”—he understood the fortunes of the nation were intertwined with that of the individual. And in the minds of the New Dealers who pioneered public housing, the nation’s well-being depended on recognizing that all Americans merited fair, safe and decent housing.

Jill Watts is the author of The Black Cabinet: The Untold Story of African Americans and Politics During the Age of Roosevelt, available May 12 from Grove Press. 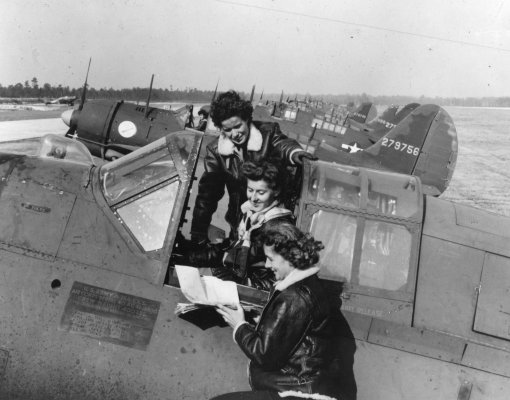 Why We Should All Be Keeping Coronavirus Journals
Next Up: Editor's Pick