Was Stonewall a Riot, an Uprising or a Rebellion? Here's How the Description Has Changed—And Why It Matters

A float commemorates the 40th anniversary of the Stonewall riots, which erupted after a police raid on a gay bar, the Stonewall Inn on Christopher St., in 1969.
Spencer Platt—Getty Images
By Katy Steinmetz

The Stonewall Inn has become to the modern LGBT rights movement what Lexington and Concord were to the American Revolution. But while there is broad agreement that something seismic happened there one fateful night in 1969, there is little consensus on anything else — including how people should talk about it. After police raided the New York City bar and sparked protest from patrons, were there riots? Was there an uprising? Was it a rebellion?

This is not just a matter for copy editors. The terminology that people use shapes how historical events are perceived, from the way they came to happen to why they matter. That’s why, for instance, some Southerners have called the Civil War the War of Northern Aggression and why some Catholic textbooks offer lessons about the Protestant Revolt rather than the Protestant Reformation. Disagreements over what to call Stonewall reflect different conceptions of what it was. “There has been a debate about the meaning of Stonewall,” says Columbia University history professor George Chauncey, “from the very beginning.”

At TIME’s request, the Oxford English Dictionary did an analysis of the language that is most commonly used in online news sources to describe Stonewall. Today, riots is most popular, followed by uprising and more distantly by rebellion. That wasn’t always the case. Uprising has seen a surge in recent years, and the first mainstream media reports about Stonewall used different language entirely.

Back in 1969, calling Stonewall a “riot” was, in some ways, strategic. The event was disruptive and violent. When police raided the Stonewall Inn, LGBT bar patrons pushed back, throwing coins at police, liberating detainees from custody and attempting to light the bar on fire while police were still inside. Parking meters were uprooted, stones were thrown and several nights of protests, involving thousands of people, followed.

Yet compared to events that Americans in the 1960s were likely to think of when they heard the word riot, the tumult that unfolded on and around Greenwich Village’s Christopher Street was fairly tame. In the years leading up to 1969, places like the Watts neighborhood of Los Angeles and the city of Detroit had seen massive unrest in black communities. The deadly upheavals there left hundreds of buildings razed and hundreds injured. Thousands were arrested and the streets were calmed only after officials deployed military troops. By contrast, evidence suggests that about 20 people were arrested during the protests that followed the Stonewall raid.

That is likely why outlets like the New York Times used what today may seem like diminishing language, characterizing Stonewall as a “melee” or “near-riot” when it first happened. The gay press, by contrast, started calling Stonewall a “riot” almost immediately.

The gay rights movement was already taking inspiration from African-Americans fighting for civil rights in the 1960s, explains Marc Stein, a history professor at San Francisco State University and author of The Stonewall Riots: A Documentary History. “What better way to say ‘we too matter and we too can revolt’” than by embracing the language that was being used to describe their profound discontent? That word and its fiery undertones also ran counter to the stereotype that LGBT people were effeminate and ashamed, too weak and too unwilling to resist.

“All of that made the word riot distinctly attractive,” Stein says. But, over the ensuing decades — as that term lost some of the proud patina it carried in a time defined by anti-war protests, radical feminism and black power — that would change.

These days, while the word riot may call to mind important historical events, it also conjures plenty of negative images — like football fans setting cars on fire after their team wins the Super Bowl, senseless destruction that is wrought by an aimless, irrational mob.

So some people have eschewed that word in favor of alternatives with more respectable undertones. The word rebellion, for example, suggests organization and more purposeful resistance to systemic oppression. As does revolt. And the word uprising has even more positive connotations; it can describe a popular groundswell that is advancing and forcing the world to recognize it exists. As people have increasingly used such terms to describe Stonewall — as well as the upheavals that happened in places like Detroit and Watts — they have analogized them to a different set of events, like the uprising in Egypt that propelled the Arab Spring or Nat Turner’s famous slave rebellion.

Michael Bronski, a professor who specializes in gender and sexuality studies at Harvard, says that when he teaches students about Stonewall, he uses the word insurrection. Some people like the word riot because it suggests “something that has been unleashed,” he says. But he feels as if that word also deprives the event of political consciousness. Even if the gay and transgender revelers who showed up at the Stonewall Inn that night had no intention of launching a movement, what happened was “of course” political. “They were completely oppressed as a group of people,” Bronski says.

It’s easier to argue that a word like rebellion or insurrection applies having seen what came in the 50 years since. The events at Stonewall didn’t start the fight for LGBT rights but they did supercharge it, inspiring groups to organize around the country. The outbursts that night were specifically about the harassment of LGBT people by police in New York City, but that energy was translated into infrastructure that eventually led to dramatic shifts in Americans’ attitudes toward LGBT people and overhauls of government policy in areas ranging from marriage to the military.

According to Jonathan Dent, a lexicographer at the OED, uprising became more popular in the wake of the documentary Stonewall Uprising, which was released in 2010. Yet that doesn’t fully account for how widely it’s been embraced. Essentially absent from media clips in the 1970s and 1980s, it’s now used liberally. Another boost seems to have come from President Obama using that term when he proclaimed the Stonewall Inn to be a national monument in 2016. On top of that, Dent says, uprising is generally associated with more upbeat outcomes than rebellion; an uprising tends to “inspire” overthrows and “reshape” status quos while rebellions are often “put down” and “splintered.”

To many supporters of the movement, it simply sounds good. Columbia’s Chauncey says uprising today connotes what riot did for many in the late 1960s: “an expression of community rage at the way they were being treated and their refusal to abide by it anymore.”

Still, there remains a camp that feels strongly that Stonewall should remain a riot. The event is commemorated in annual LGBT pride marches across the country each year, and some attendees have started expressing that sentiment on T-shirts. One could read the slogan “Stonewall was a riot” as a cheeky insistence that it was fun, but it’s also linked to more serious disagreements about what Stonewall was and what it has become.

“Is it about street protests, embodied direct action, fighting against police violence and capitalist exploitation? And in all those ways, is there something radical at the heart of what happened?” says Stein, the author of The Stonewall Riots. Or has Stonewall become a friendly catchall like the rainbow flag, symbolizing a more respectable, palatable push for equality? For him, calling it a riot “situates what happened within the more radical tradition.” It was a chaotic, unplanned event, he says, and for better or worse, that’s what made it more memorable than all the peaceful protests that had come before it.

The distance between words like riot and uprising reflects other discord that has surrounded Stonewall over the years. There is ongoing debate about whether the role of transgender people and people of color has been minimized while the narrative of resistance they set in motion has benefited white gay men, and about whether pride marches have become too corporate.

OED’s Dent sees a movement among LGBT people to “reclaim” the word riot, likening it to the viral exhortation to “BE GAY DO CRIMES.” This makes sense, in part, because the stereotypes that made that kind of rhetoric appealing in the 1960s — that LGBT people are weak or passive — persist to this day. (Groups like African Americans may feel more strongly about staying away from riot as they “continue to confront racist ideas about black rage and black violence,” Stein says.)

There remains no universal agreement about which word is most correct or most strategic. And that’s fine, historians say. The key takeaway 50 years after the events at Stonewall is that whatever took place there provided uncanny power to fuel an ongoing LGBT rights movement, no matter what people want to call it. 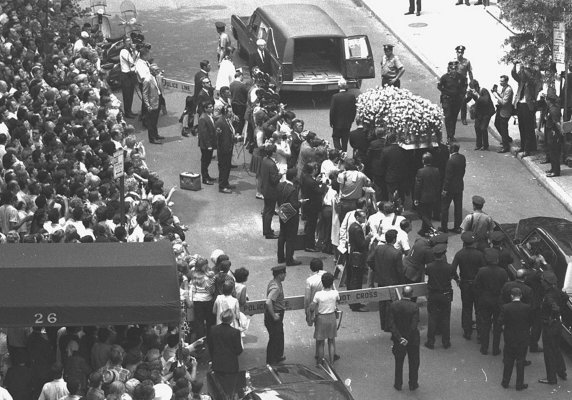 Some People Think Stonewall Was Triggered by Judy Garland’s Funeral. Here’s Why Many Experts Disagree
Next Up: Editor's Pick