Oluwatoyin Salau, a 19-year-old Black Lives Matter protestor, was found dead on Saturday in Tallahassee, Fla. after being reported missing a week earlier according to police.

Salau’s body was discovered along with the body of Victoria Sims, a 75-year-old woman and longtime AARP volunteer, who had also been reported missing days prior, a police statement says. The Tallahassee Police Department is investigating both deaths as homicides and a suspect, Aaron Glee Jr., 49, has been taken into custody.

Tallahassee police have not offered additional details on Glee’s arrest, or identified a connection between him and either of the two women. Leon County court records show that Glee was recently arrested on May 30 on a charge of aggravated battery causing bodily harm or disability and on June 9 on a charge of battery touch or strike.

Outrage over Salau’s disappearance has mounted in recent days; her name has trended widely online amid calls for further attention to her case and the larger pattern of violence against Black women.

In the wake of the recent police killings of George Floyd, Sean Reed, Tony McDade and Breonna Taylor among others, Salau had been an active participant and speaker during Black Lives Matter protests in Tallahassee.

She went missing on June 6 after tweeting about being sexually assaulted by a man she said had offered her a ride and assistance to collect her belongings from a church where had been staying.

In a thread of tweets detailing the assault, Salau wrote that she called the police after she was attacked. While Salau did not name who assaulted her in the tweets, she described him as a Black male in his mid-40s, and also offered details on the make of his car. She did not respond to or write any new tweets after June 6.

Police did not immediately respond to a request for comment on Salau’s allegations and whether an investigation was opened to look into them.

Danaya Hemphill, 22, described Salau—known among friends as “Toyin”— as “very passionate, very vocal, very loving, very spiritual, very caring” in an interview with the Tallahassee Democrat. “Toyin, she was like a light in a dark room,” Hemphill said. “That was Toyin.”

Hemphill said in tweets on Monday that Salau had recently graduated high school and had stayed with her prior to her disappearance.

In the last weeks of her life, Salau dedicated herself to the Black Lives Matter movement. Hemphill shared that Salau would recite the names of Black victims of police violence during the ongoing protests against police brutality, including invoking McDade — a Black transgender man who was killed by a Tallahassee police officer in May — and Floyd’s names, at a recent protest in front of the Tallahassee Police Department, according to the Democrat.

“I don’t want their names gone in vain,” Salau had said at the time. 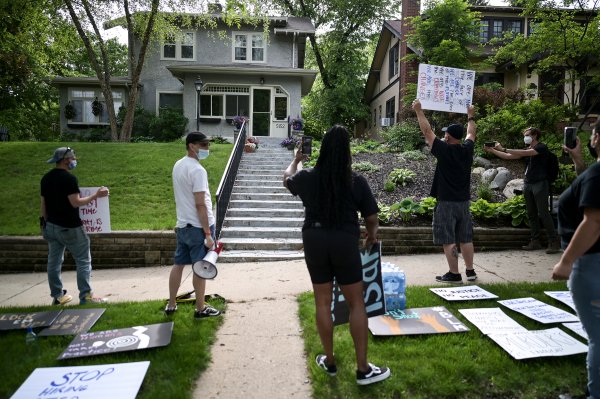 3 Ex-Officers Charged in Floyd's Death
Next Up: Editor's Pick