The 10 Best Korean Dramas to Watch on Netflix

After months of staying at home to help stop the spread of the coronavirus, many people have binged their way through the expected fare: Tiger King; reality competition shows; the entire Disney catalog; movies about social distancing to watch while social distancing. But there’s another world of entertainment for those who are willing to “overcome the one-inch tall barrier of subtitles,” as Oscar-winning director Bong Joon-Ho said—and prepared to stay up until the wee hours clutching a box of Kleenex: Korean dramas.

In the past year, Netflix has signed contracts with additional Korean production and broadcasting companies as its catalog of K-dramas grows. TIME picked the best ones to watch, from fan favorites of the last decade to new series that only recently finished airing. For the purposes of this list, shows unavailable on Netflix USA are not included.

In no particular order, here are the best Korean dramas to watch on Netflix right now.

A woman from South Korea was paragliding when a sudden tornado hit, causing her to crash-land in North Korea. Yoon Se-Ri (Son Ye-Jin), a successful entrepreneur who is also an heiress, finds herself in the Korean Demilitarized Zone—stuck in a tree above North Korean officer Ri Jeong-Hyeok (Hyun Bin). While the premise is far-fetched, what follows is a convincing romance that steadily tugs at the heartstrings as Jeong-Hyeok attempts to hide Se-Ri and send her back home. The progression of this cross-border relationship drives the plot forward, but Crash Landing on You, with its multifaceted portrayal of North Korea—the series was created with input from North Korean defectors—is far more complex than the average rom-com.

Following an accident that kills his father, Park Sae-Ro-Yi (Park Seo-Joon) is laser-focused on a mission to bring down the powerful food conglomerate Jangga Group. Its CEO, Jang Dae-Hee (Yoo Jae-Myung), had a hand in both Sae-Ro-Yi’s expulsion from school and his three-year prison sentence. Despite his past as a convict, Sae-Ro-Yi opens a bar-restaurant and strives to turn it into a top franchise in Korea. He assembles a group of misfits—led by teen influencer Jo Yi-Seo (Kim Da-Mi), who becomes the restaurant’s manager—and faces off against CEO Jang. Based on the webtoon of the same name, Itaewon Class begins as a classic underdog story but evolves into a tale on the limits of vengeance and the strength of camaraderie. With its diverse cast, the series also openly addresses issues of discrimination based on race and gender identity.

After his parents were killed by aristocrats, a young boy born into slavery boards a warship and escapes from Joseon to America in 1871. Decades later, Eugene Choi (Lee Byung-Hun)—now a captain of the U.S. Marine Corps on a political mission—returns to the home country that once rejected him. He falls in love with a noblewoman, Go Ae-Shin (Kim Tae-Ri), who is secretly connected to a network of Korean independence fighters. Set in the years leading up to Japan’s occupation of Korea, Mr. Sunshine portrays a burgeoning romance in a weakening nation where national identity did not always align with political loyalty. Besides serving up stunning cinematography, the show introduces two of the most dynamic female leads from the K-drama world—one carries a rifle and the other wields a sword—alongside a large cast of characters each with a unique position in Joseon’s fight.

Ten days after the king mysteriously collapses, rumors that he is dead begin to spread. His son, Crown Prince Lee Chang (Ju Ji-Hoon), sets out to investigate the truth about the King’s condition. Far from the palace, he discovers that a plague turning the living into the undead has started to infect the nation. The battle against the infected intensifies alongside an equally gruesome fight among powers hungry for the throne. Across its first two seasons, Kingdom takes the most rousing elements of a zombie thriller and reimagines them in this historical drama that raises the question: is the enemy the zombies or the humans?

Dong-Baek (Gong Hyo-Jin) runs a bar-restaurant called Camellia in the fictional town of Ongsan. She is the target of gossip among the women of Ongsan, for operating a business that serves alcohol to men who frequent Camellia, and for being a single mother. When police officer Hwang Yong-Sik (Kang Ha-Neul) falls for Dong-Baek, what begins as a one-sided, cringe-inducing crush develops into a moving relationship providing a respite from the hostility she is accustomed to. Yong-Sik’s company comes at the perfect time, too, considering that a serial killer is seeking to claim Dong-Baek as his next victim. When the Camellia Blooms blends the light-hearted ingredients of a rom-com with the suspense of a thriller, made more compelling by the convincing chemistry between the lead actors.

Since an accident killed her five years ago, Cha Yu-Ri (Kim Tae-Hee) has lived as a ghost. One day, she becomes the subject of a reincarnation project. Yu-Ri returns to her human form, and is given 49 days to get “her place” in the family back in order to continue to stay alive. She appears in front of her five-year-old daughter and her husband Jo Gang-Hwa (Lee Kyu-Hyung), who has remarried. Despite a premise laden with fantastical elements, Hi Bye, Mama! offers a realistic portrayal of grief and loss and a heartrending depiction of a mother-daughter relationship complicated by trauma.

Criminal profiler Park Hae-Young (Lee Je-Hoon) is haunted by the kidnap-murder case of his elementary school classmate—the culprit was never caught. When a present-day Hae-Young finds and answers a mysterious walkie talkie and is connected to Detective Lee Jae-Han (Cho Jin-Woong), speaking to him from the year 2000, he finds an opportunity to solve the case. Soon, their communication across time allows the pair to stop crimes from happening in the first place. Signal smartly weaves real-life incidents in South Korea—a case in the series is inspired by the Hwaseong serial murders—into a fast-paced narrative that immerses the viewer in multiple timelines, each with its own mysteries.

A superstar pitcher in Korea is convicted after attacking a man who tried to sexually assault his sister. Kim Je-Hyeok (Park Hae-Soo), who was days away from making his MLB debut in the U.S., receives a one-year sentence. As he settles into prison life, Je-Hyeok reconnects with Lee Joon-Ho (Jung Kyung-Ho)—a childhood friend who is now an officer at the correctional facility. Prison Playbook is a dark comedy that examines corruption in the prison system while basking in the warmth of small pleasures and the comfort of human companionship.

When a man with close ties to high-ranking law enforcement officials is murdered, prosecutor Hwang Shi-Mok (Cho Seung-Woo)—who has lacked empathy since undergoing brain surgery as a child—teams up with warm-hearted police lieutenant Han Yeo-Jin (Bae Doo-Na) to solve the case. As the odd couple searches for a trail left by the culprit, they uncover the sprawling corruption taking place within the structures that profess to keep order. Stranger is a gripping murder mystery that challenges the intentions of the authorities entrusted to defend the law.

The three seasons of this drama (Reply 1997, Reply 1994, Reply 1988) each revolve around a group of friends and their families, whose lives from the eponymous year of the installment are recounted. The cast’s transition to adulthood is captured as they navigate relationships against the backdrop of real-life historical events, from the 1988 Summer Olympics in Seoul to the Sampoong Department Store collapse in 1995 that killed more than 500 people. The series is best known for delivering poignant vignettes of the bonds between friends, families and occasionally lovers, packing sentiment and nostalgia into the seemingly mundane activities of everyday life. 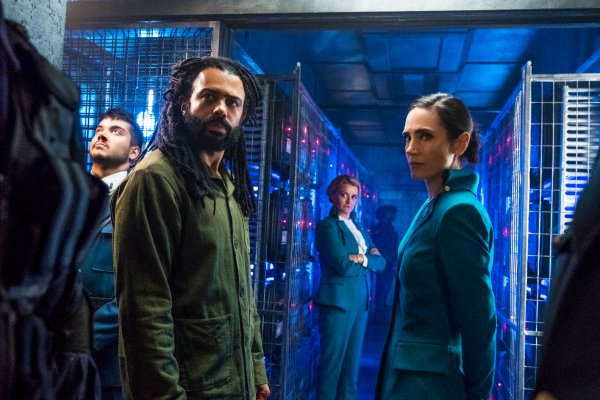 TNT's 'Snowpiercer' Adaptation Is Convoluted
Next Up: Editor's Pick