The rapid global spread of COVID-19 (or the novel coronavirus) has led to canceled events, closed venues and postponed movie premieres and athletic competitions. Many are now turning to social distancing, the CDC-recommended practice of reducing close contact with other people, to do their part in helping to address the pandemic.

While limiting the amount of time you spend around others is effective in slowing the infection rate of a highly contagious disease, it can feel bewildering or isolating to shift gears from regularly gathering in public spaces to staying at home and spending time alone.

Luckily, there are plenty of ways to stay entertained while practicing social distancing—and one of the best is to update your streaming queue with films that make the case for the humor, the beauty and occasionally even the profound life lessons learned from time spent alone.

Read on for our selection of the 10 best films to watch while practicing social distancing.

Reese Witherspoon spends the majority of her time by herself in Wild, the film adaptation of Cheryl Strayed’s memoir about hiking the Pacific Crest Trail. While that much solo time might seem daunting—and it’s spent in the often harsh outdoors, rather than the comfort of a living room—Witherspoon’s Cheryl taps into the healing power of working through personal issues and confronting tragedy while going on a 1,100-mile trip by yourself.

Kevin McCallister (played by a young Macaulay Culkin) is a roguish prankster who’s accidentally left behind by his family when they leave in a hectic flurry for a holiday trip to Paris. While they’re gone, he defends the house from some would-be robbers before he’s reunited with his folks. While Home Alone is often thought of as a Christmas movie—and one that ultimately makes the case for family togetherness—it’s also a film about the giddy and exhilarating freedom of being by yourself in an empty house.

With almost no dialogue for half of this Pixar movie, Wall-E‘s innate charm lies within the joy a tiny trash compactor robot finds in simply exploring the wasteland of the world around him, where’s he’s the solitary keeper of the environment. His tender need for companionship, however, leads him on an adventure that changes his life. (You just have to get past the premise that humankind has turned Earth into an uninhabitable garbage pit by the 29th century in order to succumb to its magic.)

While The Holiday is the ultimate “changing places” romance, the real beauty of the film lies in the longing of both Amanda (Cameron Diaz) and Iris (Kate Winslet) for solitude after they both experience devastating matters of the heart. Both seek solace in the comforts of home while they recover from heartbreak, something in which those practicing social distancing may just find something familiar.

Before there was Love Is Blind, there was Her. In Spike Jonze’s romantic drama, Joaquin Phoenix plays Theodore Twombly, a man who falls in love with an operating system he can neither see nor hold, voiced by Scarlett Johansson. While he’s pursuing the relationship, he’s experiences the bittersweetness of being emotionally engaged with someone who can’t be physically present.

Workaholic Chuck (Tom Hanks) learns what his real values are after he’s stranded by himself on an island in the South Pacific. While there, he adjusts his life to not only survive, but build a new existence for himself with the limited resources he has. It bears mentioning that Hanks, who along with his wife Rita Wilson recently tested positive for COVID-19, is currently isolated as he recovers from the illness, making his character’s resilience in the face of loneliness all the more poignant.

Buy or rent on Amazon

In Alfonso Cuarón’s thriller, Sandra Bullock plays Dr. Ryan Stone, whose first trip into space leaves her stranded by herself. While Stone’s predicament is anxiety-inducing, her trip taps into the awe-inducing wonder of the galaxy that surrounds us and the rush of self-sufficiency when faced with unimaginable challenges.

Based on the true story of mountain climber Aron Rolston, 127 Hours depicts the (yep, you guessed it) 127-hour-long saga of how a man (played by James Franco) saves his own life by cutting off his arm after it gets trapped under a boulder. Not the most pleasant way to spend time alone, but a story of courage and mental and physical toughness, nonetheless.

Lars Lindstrom (Ryan Gosling) avoids as much social contact with others as possible, but still longs for connection. One day, he introduces Bianca, an adult doll, as his girlfriend to his family and acquaintances, an apparent solution to both his loneliness and his discomfort with interacting with others. (Spoiler alert: there is an actual real girl who eventually shows up, too.)

In Another Earth, Rhoda (played by Brit Marling) attempts to atone for her past by distancing herself from her former life and making amends with and later falling in love with the man whose family she killed while driving under the influence. When she gets the chance to travel to an identical Earth for a new start, she must decide if she really wants a new life alone or to face the consequences of her actions on this one.

This movie is adapted from Jon Krakauer’s nonfiction book of the same name about Christopher McCandless (played here by Emile Hirsch), who turns his back on his wealthy family and fancy college degree, rids himself of his earthly possessions and attempts to survive on the land and his wits, hiking from North America to Alaska. Christopher relishes the tangible and figurative freedom he has by declaring his independence, but also realizes that “happiness is only real when shared.” 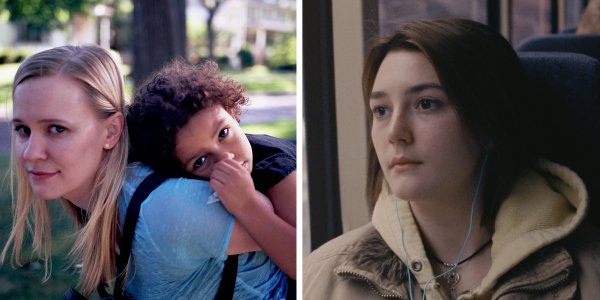 These Movies Are Changing the Narrative About Abortion
Next Up: Editor's Pick