If Ever There Was a Celebrity for This Moment, It’s Tom Hanks

Hell is other people, particularly during a pandemic. A handshake is a terrible idea, and conventional wisdom says riding in a crowded subway car is practically a death wish. More people are working from home, isolated from their usual day-to-day contact with coworkers and friends. But right now everyone who feels isolated or anxious or desperate has a friend who also happens to be a famous person, who also happens to have starred in one of the great films about human loneliness and our desire for connection. In Robert Zemeckis’ Cast Away, released in 2000, Tom Hanks played a FedEx systems engineer who ends up stranded on a desert island, the lone survivor of a plane crash. He makes use of the bits and pieces he finds in FedEx boxes that wash ashore. Using a smear of blood from his own hand, the result of an accidental cut, he paints a face on a salvaged volleyball. With this not-real person, whom he names Wilson, he creates a miniature civilization for himself. This is the only close-to-human face he’ll see for four years.

On the evening of March 11, Hanks announced in a tweet that he and his wife, the actor and singer Rita Wilson, both in Australia for a movie Hanks is working on, had both tested positive for the Coronavirus. He describes some of the symptoms they’d experienced: They’d felt a bit tired, as if they had colds; they had a few body aches; Rita had had some chills that came and went; both had slight fevers. They did the responsible thing and decided to get tested. Also: Yes, they are famous people, with access to things that are out of reach of the rest of us mere mortals. Regardless, they wanted to do the right thing, and in light of the results they got, Hanks said this: “Well, now. What to do next? The Medical Officials have protocols that must be followed. We Hanks’ will be tested, observed, and isolated for as long as public health and safety requires. Not much more to it than a one-day-at-a-time approach, no?”

The news that Hanks and Wilson have contracted the virus is mildly alarming: If Tom Hanks, our most famous everyman actor, can get Coronavirus, I can too! But it’s also reassuring: Tom Hanks has the Coronavirus, but he’s not panicking and he’s taking all the proper precautions. Particularly for those who live in the United States, where the Administration has been dangerously downplaying the risk, Hanks’ honesty by itself is a salve. Again, he’s a famous person of means, with access to great medical care. But past a certain point, a lethal virus doesn’t care how much money you’ve got. Hanks and Wilson are as vulnerable as any members of the 60-plus age group, who have the greatest risk of becoming critically ill. Yet the mood of his tweet—its cautious “Let’s see what happens, while keeping others safe” optimism—is just what most people seem to need right now.

There’s also the simple fact that when a famous person contracts a disease, that illness suddenly seems more real to people. In late July 1985, Rock Hudson announced, at age 59, that he had AIDS. He died four months later. His public admission was significant for several reasons: In the early 1980s, AIDS was treated largely as a “gay scourge”; some religious groups saw it as a kind of divine punishment, a way of clearing the Earth of their version of evil. (Something for younger people to consider before they hit the “post” button on that “Bye Boomer!” Coronavirus tweet.) Hudson didn’t come out as gay during his lifetime, though stories about his sexuality had circulated around Hollywood since the early days of his career. But Hudson was famous, a movie star people loved. He was also only roughly 14 years younger than our president at the time, Ronald Reagan, who refused to speak publicly about the AIDS crisis until it was well past being an epidemic and held back on development of treatments that could have saved millions of lives. Moviegoers who had grown up with Rock Hudson—even if they were hardcore-conservative Reagan supporters—suddenly had a human face to associate with a disease they might have earlier thought wasn’t worth caring about. Similarly, if there are still people in the United States who believe the Coronavirus is a hoax, would they be able to say it to Tom Hanks’ face?

For the rest of us—for people who understand what the risks are, and are taking precautions and hoping for the best—Hanks isn’t just a calming presence (which would be enough), but a reminder of something else. Art—which includes movies, and thus includes the work of actors—is the finest expression of humankind’s spirit and complexity, of its contradictions but also its surprising depths. Art keeps us going during terrible times, and it endures after the people who have made it are gone. Art is a face, a smear of human blood on a volleyball. Hell is other people, until that moment you look around and ask, “Where is everybody?” That’s when Tom Hanks is there for you. He’s your face; he’s your Wilson. 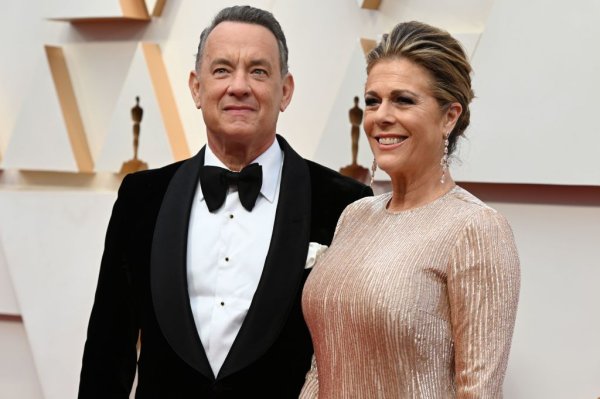 Celebrities Voice Support for Tom Hanks and Rita Wilson After They Shared They Tested Positive for Coronavirus
Next Up: Editor's Pick