Gentrification, as depicted in pop culture, tends to be a conflict between strangers. There are the original occupants of a suddenly desirable urban neighborhood, usually working-class immigrants and people of color. And then there are the relatively rich, young, college-educated white people who move in seeking cheaper housing or just the cachet of living somewhere “authentic,” only to drive up rents and displace the families and businesses that settled there long before the newcomers were born. But what if the line between gentrifiers and gentrified isn’t so clear? What happens when—due to differences in education, language, dreams, experience and responsibilities, as well as the complexity of hybrid identities—second- and third-generation immigrants end up in the middle of a war between their elder relatives and their white peers?

These are the central questions of Gentefied, a bilingual dramedy premiering on Netflix Feb. 21. Adapted by creators Marvin Lemus and Linda Yvette Chávez from their web series of the same name, with America Ferrera attached as executive producer, it follows three Mexican-American cousins in the predominantly Latinx East Los Angeles neighborhood of Boyle Heights as they scramble to help their grandfather Casimiro (Joaquín Cosio of Narcos: Mexico) save his taqueria. Erik (JJ Soria of The Oath) is a sweet screw-up desperate to win back his upwardly mobile ex (Annie Gonzalez). A pragmatist saving for culinary school, Chris (MTV Tr3s alum Carlos Santos) works the line at a fancy restaurant. Ana (Karrie Martin, Pretty Little Liars) is—to her mother’s chagrin—an artist, juggling her work with odd jobs and a serious girlfriend, Yessika (Julissa Calderon).

Boorish white people linger in the background throughout the 10-episode first season, swanning into the botánica in yoga pants for some cultural tourism and ignoring the mariachi band hired to enhance the atmosphere of their boozy brunch. But the real gentrification drama happens within Casimiro’s family and between other Boyle Heights natives. Chris’ efforts to satisfy his boss, an abusive chef who could make or break his career, earn him the scorn of Latinx co-workers; at the taqueria, his high-end menu tweaks mark him as a “coconut” (brown on the outside, white on the inside). Meanwhile, Ana’s ethnic identity, sexuality, politics and ambition come into conflict when a gay white man hires her to paint a homoerotic mural on a building he purchased in the neighborhood—and the older woman who operates a store inside it starts losing business. For these millennials, it seems impossible to make their dreams come true without selling out their heritage and their elders.

Lemus and Chávez identify a catch-22 inherent in the American Dream: when you suffer to secure your kids a better life in a new country, that better life—shaped as it is by the possibilities and values of a different culture—will probably look different from the one you imagined. And that might feel like a betrayal. This has been a theme of nearly every recent series about the children of immigrants, from Master of None to Fresh Off the Boat to One Day at a Time. What’s unique about Gentefied is the way it pulls back to situate that intergenerational conflict within a larger community, where a Chicana garment worker might have more common ground with the Chinese woman at the next sewing machine than with her own daughter. The show picks up on class differences among Latinx people in Boyle Heights, whether it’s business owners, their employees and a wide variety of customers or homeless families and the nonprofit workers charged with helping them find housing.

To a certain extent, this approach also distinguishes Gentefied from Vida, the exceptional Starz drama in which two adult sisters from the same neighborhood reunite at their childhood home after the death of their mother, who owned both the building they grew up in and the insolvent bar on its ground floor. The shows aren’t quite as similar as they might sound. (Some might still protest that we don’t need two series about the children of Mexican immigrants trying to save their families’ Boyle Heights businesses. To them, I say: remember when NBC debuted two shows about the making of network-TV sketch comedies in the same season?) Vida tells a more intimate, mature story, one that’s just as attuned to the complexities of gentrification yet also delves into themes such as womanhood, power and desire. It’s deep where Gentefied is broad.

The elegance of Vida’s storytelling throws its successor’s minor weaknesses into relief. Despite multifaceted characters and convincing performances (particularly from Cosio and Soria), Lemus and Chávez’s dialogue sometimes feels preachy, mawkish or on-the-nose. When they argue, Chris and Erik are reduced to mouthpieces for diametrically opposite points of view. A few scenes, such as the one where a woman stares longingly into a bakery window full of pastries she can’t afford, verge on cliché.

The show is best when it finds quieter ways to communicate: when it spends a full episode following a broke musician and his little boy; when Casimiro, a gentle widower in permanent mourning, takes a patient female friend on a date without realizing it; when we see it silently dawn on Yessika that Ana might care more about stardom than about giving back to her community. Of the many series about immigration, gentrification and cross-cultural identities that have sprung up in the past several years, Gentefied is among the most astute. It only needs to trust that its cast will convey everything that’s left unsaid—and that viewers will read between the subtitles. 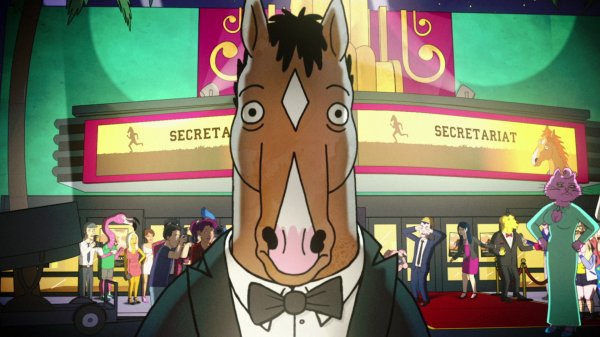 Inside the Creation of Bojack Horseman's Masterful Title Sequence
Next Up: Editor's Pick