Eminem’s surprise performance of his hit song “Lose Yourself” at the 92nd Annual Academy Awards confused pretty much everyone watching the broadcast Sunday night.

The expressions on director Martin Scorsese and his daughter Francesca’s faces encapsulated the general mood.

Others in the audience bobbed their heads and danced along to Eminem’s performance, or looked on in confusion.

People following the show online registered shock; the rapper was not involved in any of the nominated movies this year, and it was unclear why he was singing a nearly two-decade-old song at the 2020 Oscars.

Eminem performed at the 2020 Oscars to make up for missing the ceremony in 2003, when “Lose Yourself” won Best Original Song for the 2002 film 8 Mile, according to a tweet from the rapper.

In an interview with Variety published Monday, Eminem said he had not expected to win the Oscar and stayed home with his daughter on the night of the ceremony. His keyboardist and collaborator, Luis Resto, accepted the award, bestowed by Barbra Streisand, in Eminem’s place.

“I don’t even think I understood back then that you could get an Oscar for a song, and I remember being kinda confused about why I was even up for one, because as a kid with the Oscars, it was like a vacuum,” the rapper said.

Though he had been asked to perform “Lose Yourself” at the Oscars that year, Eminem said he felt it wouldn’t be a good idea because he’d recently performed it at the 2003 Grammy Awards. He added, “And also, back at the at time, the younger me didn’t really feel like a show like that would understand me.” 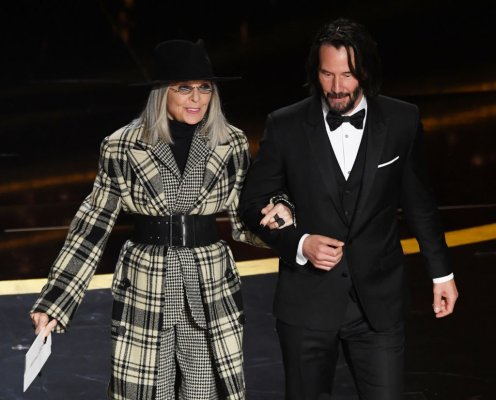