The actor Lori Tan Chinn shared an onscreen kiss with Al Pacino. She had scenes opposite Diane Keaton and Hugh Grant, and roles in Orange is the New Black and Roseanne. Before she moved to New York and appeared in several Broadway productions, Bruce Lee opened for her dance troupe at a Seattle parade.

But Chinn also harbors the pain of a lifetime of rejection, harassment and discrimination. A rare Asian-American actor and dancer working at a time when issues of representation were largely ignored, Chinn says she lost many Asian-specific roles to white actors—including Meryl Streep—while the scant roles she was offered were often Mandarin-speaking caricatures. She still lives in a rodent-inhabited New York apartment; last year, after many failed auditions, she was on the brink of giving up acting altogether.

“I was ready to just throw in the towel. I thought I’d have to go on welfare or apply for food stamps,” Chinn, now 71, told TIME over breakfast at a 42nd Street diner.

Instead, Chinn was cast as Awkwafina’s grandmother in Awkwafina is Nora From Queens, a new Comedy Central sitcom that premiered this week. The role represents a new pinnacle in a tumultuous five-decade career: Even in a formidable ensemble that includes freshman Saturday Night Live cast member Bowen Yang and BD Wong (Law & Order), Chinn effectively has second billing as the title character’s doting, mischievous and foul-mouthed grandmother. In her review, TIME TV critic Judy Berman called Chinn “hilarious,” “an adoring spark plug.”

Chinn spoke to TIME for the first major publication interview of her career. She talked about the challenges, from whitewashing to “survival jobs” to being bullied by directors, and also the joys, like improvising with Awkwafina.

Many of the roles Chinn has been asked to play are immigrants. But Chinn is not one herself: she grew up in Seattle in the 1950s and ’60s as the daughter of Hoisan Chinese immigrants. As a teenager she worked at her father’s restaurant, the Chung Sun Cafe in the Ballard neighborhood; during breaks, she took classes at the dance studio down the street. “When there’s an itch, you follow it,” Chinn says. Before long, she was performing across Seattle, including at a Chinatown parade in which her dance act was preceded by a martial arts performance from a young Bruce Lee, who was well-known in the community. (“We would call him ‘goh goh,’” Chinn recalls, referring to the term for big brother in Hoisan. “He loved to cha cha.”)

But Chinn soon realized her artistic progress was stalling in the Northwest. “Seattle was a redneck town—there was no Starbucks or grunge yet,” she says. “There were Seafair parades by Chinatown and they would be terribly racist. I knew the opportunities were closed.”

Despite the disapproval of her mother and a pastor at a local church, Chinn saved enough money after high school to take the Canadian Pacific Railway and several buses across the country to land in New York in 1969. Three months later, Chinn’s mother was hit by a car in Seattle and killed. “We missed her—but she missed China so much that I have to feel happy she was reunited with her mother,” Chinn recalls.

‘Get Out Of Here’

Alone in New York, Chinn scrapped and saved, poring over magazines for casting calls in both dance and theater. “I lived at the Y and didn’t know anybody. I got my first taste of lesbianism, because those ladies there were very friendly to me,” she says, eyes twinkling. “I looked like a little 12-year-old girl with pigtails.”

In 1970, she landed a role on Broadway in Lovely Ladies, Kind Gentlemen, a musical in which an American army officer goes to a Japanese village after World War II to Americanize its inhabitants. But the roles of the villagers were grotesque stereotypes, with white actors putting on buck teeth and latex eyelids and shuffling around onstage. “It was from the Mickey Rooney School of Acting,” Chinn says, referring to the actor’s offensive role in Breakfast at Tiffany’s.

It was just the beginning of several decades of humiliating experiences. Chinn says that at auditions, casting directors would show her pictures of blondes and say, “You get it? Get out of here.” She often was forced to compete for the one nonwhite role in productions. “I’d have to talk the director out of casting an African-American. I’d feel bad, but how was I supposed to have a chance?”

While Chinn trawled for meager opportunities in mainstream white spaces, she found acceptance within theater communities of color. “I was raised in the African-American community,” she says. She likens both Syvilla Fort, the dancer and choreographer whose students included Alvin Ailey, and Ellen Stewart, a downtown theater pioneer who led La MaMa Experimental Theater Club, to mother figures. She spent time performing with the New York Federal Theatre and the Frank Silvera Writers Workshop, where she worked with playwrights like August Wilson (Fences).

Chinn also worked with several Asian theatrical groups, including La MaMa Chinatown and the Asian-American Repertory Theater. They put on new plays, staged pickets and protests against the casting of whites in Asian roles and developed a burgeoning support system.

In the mid-70s, Chinn caught a big break and joined the prestigious Eugene O’Neill Theater Center. Even there, however, she was confronted with whitewashing. In 1975, she was passed over for the role of the Mongolian princess Kogatin in a production of Marco Polo in favor of a young Meryl Streep. “I went to [artistic director] Lloyd Richards and said, ‘What the f-ck is this?’” she says.

Chinn doesn’t blame Streep: “She wasn’t aware because she didn’t live that life,” she says. But she still put Streep on a list she keeps called “Oh, hell no!,” of non-Asian actors who have played Asians. The list also includes Khigh Dhiegh, Emma Stone and Scarlett Johansson.

To make ends meet, Chinn took on many “survival jobs.” She typed and proofread for American Lawyer Magazine and a served as a representative for Chun King Frozen Foods, tasked with preparing and presenting food for managers at supermarkets. She faced her fair share of degrading modeling gigs: “When you’re young, they ask for naked photos. There was an ad for bras where they wanted Asian women to go bare-chested.”

Here and there, however, Chinn landed roles in significant productions, allowing her to work side-by-side with actors who are now commonly thought of as legendary figures. She acted in the play The Primary English Class with Diane Keaton (“like a sister”) and The Ballad of Soapy Smith with Cherry Jones (“She’s lovely”). While filming the 1982 film Author, Author, Al Pacino took an interest in her: “All during the week, Pacino was looking at me. When it came time to film, he came up to me, put his hands on my face and kissed me flat on the mouth.”

Chinn was also in the original 1988 cast of M. Butterfly, David Henry Hwang’s Tony-winning, Pulitzer Prize-finalist play which represented a leap forward for Asian representation in theater. She played Comrade Chin, Suzuki and Shu Fang alongside John Lithgow and BD Wong in his Broadway debut. But Chinn wasn’t able to enjoy the experience, because she says director John Dexter took an intense dislike to her. “He used me as a scapegoat, a whipping boy,” Chinn says. “His partner would come to my dressing room and talk to my dressing mate and call me a Boat People.”

In the ‘90s, Chinn took on many small roles, including in Glengarry Glen Ross (as a coat checker), Mickey Blue Eyes (as a restaurant owner in an iconic scene involving Hugh Grant and a fortune cookie) and Roseanne (as a salon employee). The latter two roles have been subject to some criticism, given that they feature heavy accents and stereotypes. “There are some young Asian Americans who say, ‘you’re not a good example,’” Chinn says. “But many immigrants have an accent. Don’t put us down and put any kind of label on us. Watch our backs—watch how we have struggled.”

Right before Chinn landed a recurring role on Orange is the New Black as the hardened inmate Mei Chang, she was struggling to find steady work and, in order to make money, assembling colored envelopes for $5 an hour. Her role on the Netflix show earned her plenty of praise but not much financial comfort: “I didn’t have the money to buy the box sets. Eventually, when I make enough money from the next season, I’ll be able to see it.”

“The Freest Role I’ve Had”

Chinn was ready to leave acting. “I thought, ‘maybe I’ll have to apply for food stamps again after I just lost my sixth audition for a two-line role where I had to translate Mandarin,’” she says. But last year, she was cast in Awkwafina Is Nora From Queens. The show arrives as part of a larger push for Asian representation that emerged around Crazy Rich Asians, which Awkwafina starred in; since then, several Asian-led projects, from Hustlers to The Farewell to Always Be My Maybe, have found success in theaters and on streaming services.

On the show, Chinn’s impish character raises a ruckus in Atlantic City with her rowdy friend group of older Chinese women; plays violent video games with reckless abandon; and even gets her own epic backstory in the form of a cheesy K-drama. “This is the freest role I’ve had. I’ve spent years of doing roles that were written by non-Asians and portraying us the way they want us to be portrayed,” she says.

The role is pivotal to the show because Awkwafina has a very close bond with her own grandmother. (In her acceptance speech for Best Actress in a Musical or Comedy at the Golden Globes, for The Farewell, she called her “my best friend, the woman who raised me.”) Chinn met Awkwafina’s grandmother when she came to set; the two bonded over the fact that the props team had put American peanuts, not Chinese peanuts, in the character’s home. “We’ve become a family now,” she says.

Chinn especially likes working with Awkwafina, who told the New York Times this month that Chinn was her dream actor for the role. Chinn says that when they’re on set together, much of their dialogue is improvised. “She is a brilliant mind—and I get to spar with her,” she says. “It’s like a school of fish—when the lead one goes zzzzip and all of a sudden they all move together—that’s how it feels working with her.”

When talking about the success of younger Asian performers like Awkwafina and Constance Wu, Chinn seems genuinely thrilled for them but also a bit wistful. “I’m happy for them, but I wish there could have been something. I’m still living in an apartment where there are mice and deplorable conditions,” she says. “I don’t have grand visions to be a movie star. I’d just like to get my teeth fixed and pay off some loans.” 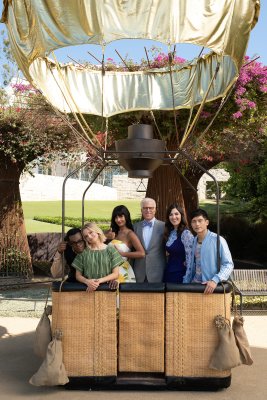 The Good Place Became the Last Great Sitcom on Network TV by Daring Its Audience to Be Better
Next Up: Editor's Pick