About three years after stirring controversy for playing a half-Asian character in Cameron Crowe’s Aloha, Emma Stone, who is not Asian, appeared to offer an apology of sorts at the 76th annual Golden Globes.

At the start of the ceremony, Sandra Oh, who co-hosted the show with Andy Samberg, joked about the spate of whitewashing of Asian characters in Hollywood while speaking about Crazy Rich Asians, which is up for a Golden Globe.

“It is the first studio film with an Asian-American lead since Ghost in the Shell and Aloha,” she said.

Amid the laughs, Emma Stone could be heard in the audience yelling, “I’m sorry!”

It was an apology that shocked the internet and viewers, who couldn’t confirm what they’d heard right away.

Stone has previously spoken about the fallout from her accepting the Aloha role, saying it taught her about the issue of whitewashing in the film industry.

“I’ve learned on a macro level about the insane history of whitewashing in Hollywood and how prevalent the problem truly is. It’s ignited a conversation that’s very important,” Stone told Australian outlet news.com.au in 2015. She added: “There are some flaws in the system. My eyes have been opened in many ways this year.” 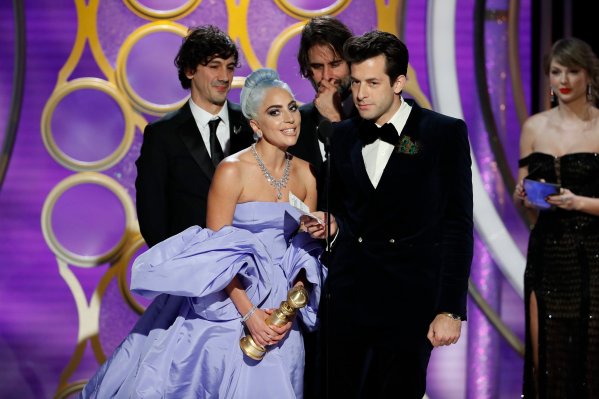 See All the Winners of the Golden Globes 2019
Next Up: Editor's Pick