Auschwitz detainees walking to gas chambers. Many of the French Jews rounded up in Paris during the Vel D'Hiv deportation in July 1942 were sent to Auschwitz.
Antoine GYORI/Sygma—Getty Images
By Olivia B. Waxman

International Holocaust Remembrance Day commemorates the liberation of Auschwitz on Jan. 27, 1945, and this year’s observance will be noteworthy for marking the 75th anniversary of that event. But the context in which the anniversary arrives is also noteworthy for another reason: one 2019 report found that more Jewish people had been killed in anti-Semitic violence worldwide in the previous year than in decades.

One country that has found itself a focal point of this disturbing trend has been France, home to the world’s third-largest Jewish population. That nation saw a 74% spike in anti-Semitic acts between 2017 and 2018, according to government records.

But if knowledge is a key part of tolerance, France may have some work to do before it can fight that trend. A study released Wednesday, commissioned by the Conference on Jewish Material Claims Against Germany (the Claims Conference) and conducted by Schoen Consulting, found that one quarter of French millennials and Gen Zers surveyed have never heard of, or do not think they have heard of, the word Shoah, the term the French commonly use for the Holocaust.

Perhaps more troubling, 20% of respondents in that age group said that holding anti-Semitic views was “acceptable,” twice the rate of that for the population as a whole. Meanwhile, a majority of French respondents — 52% — believe that “something like the Holocaust could happen in other European countries today.”

“There’s a shocking rise of anti-Semitism around the world, but particularly France, and therefore if there is any country in the world that should be focused on greater, more effective Holocaust education, it is France,” says Greg Schneider, Executive Vice President of the Claims Conference.

The France survey is the fourth in a series of Claims Conference studies about knowledge and awareness of the Holocaust and anti-Semitism, following studies on the U.S., Canada and Austria. Schneider says he was particularly surprised by the number of young respondents who had never heard about the Holocaust because the Nazis occupied France from 1940 to 1944; in fact, that number was comparable to results from the U.S. version of the study conducted in 2018, in which 22% of millennials hadn’t heard of or were not sure they had heard of the Holocaust.

“It’s even more surprising for me in countries where the Shoah happened — in their backyards, with their grandparents — as opposed to the U.S. and Canada where it’s [seen as] European history,” says Schneider. “In France, it’s logistically much more possible to take a field trip to the sites of Nazi atrocities.”

Geographic proximity isn’t the only reason the study results might surprise some. After all, Holocaust education is mandated in France.

Awareness of the importance of that past has grown since French President Jacques Chirac’s historic 1995 acknowledgement of France’s role in Nazi crimes, when he admitted that “the criminal folly of the occupiers was seconded by the French, by the French state,” on the anniversary of the July 1942 Vél d’Hiv roundup, when 13,000 Jewish people were detained in an indoor cycling stadium in Paris for the largest deportation of the Jewish people in France.

“Before 1995, no one wanted to declare responsibility, but when Chirac said ‘France wants to look back at good pages and bad pages,’ it changed the teaching and understanding of French people of what happened in France,” says Robert Ejnes, Executive Director, of the Representative Council of French Jewish Institutions (CRIF).

The current French President, Emmanuel Macron, has reiterated that France “organized” the round-up.

Nevertheless, there are obstacles to teaching this history in French schools — not least of which is increasing concern about the safety of Jewish students in French public schools. Public school administrators have advised Jewish parents to put their children into private schools for personal safety reasons, and some Paris public schools have been described as “no-go zones” for Jewish students. Ejnes says the French Jewish community has encountered non-Jewish parents who do not want their kids to learn about the Holocaust, arguing it’s not their history. One 2019 poll showed 9 in 10 Jewish students in France have encountered anti-Semitism at least once. In the Claims Conference survey, 30% of respondents said that there were “a great deal or many” neo-Nazis in France today (and 43% said the same about the U.S.).

And yet school is still the front line when it comes to Holocaust education: 64% of French millennials and Gen Zers “first learned about the Holocaust” in school, compared to 46% of all respondents. After all, while older generations could learn from survivors, the number of eyewitnesses who can still speak of what they saw is declining.

But, Schneider says, the survey results do contain at least one bright spot, as respondents affirmed the importance of teaching this history. Later in the survey, when questioners explained to millennial and Gen Z respondents that the Shoah was “the systematic, bureaucratic, state-sponsored persecution and murder of the Jewish people by the Nazi regime and its collaborators during World War II,” 80% agreed that “it is important to continue to teach about the Holocaust, in part, so it doesn’t happen again.” The key is to make sure the education is accessible and fully funded.

“If we leave this trend unchecked,” Schneider says, “imagine what 20 years from now the survey results will show.”

A photo caption in the original version of this story misstated what the image depicts. The photo depicts detainees in Auschwitz, not in the Paris area. 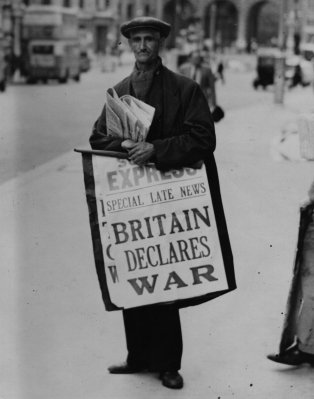 Hundreds of Britons Volunteered for a Diary-Keeping Project in 1937. They Left an Invaluable Record of World War II
Next Up: Editor's Pick