Jewish civilians are forced to march by SS soldiers in this 1943 photo during the destruction of the Warsaw Ghetto in Poland.
National Archives/Getty Images
By Lily Rothman

On a day dedicated to remembering the Holocaust, some experts are worried that their decades of efforts to do so may not be making enough of a mark on Americans.

“We say ‘Never Forget,’ but the people who were murdered are literally being forgotten as we speak,” says Greg Schneider, Executive Vice President of the Claims Conference, the organization behind a new study showing just how that forgetting is happening.

The study results were released Thursday as the world marks Yom HaShoah, Holocaust Remembrance Day, and thus the anniversary of the beginning of the Warsaw Ghetto Uprising in 1943. A phone and web survey of a representative sample of 1,350 American adults, the study was commissioned by the Conference on Jewish Material Claims Against Germany (the Claims Conference), which represents a number of Jewish interests, and was conducted by Schoen Consulting.

Schneider tells TIME that the results show a few themes. One is that major knowledge gaps exist — for example, 45% of all adults cannot name a concentration camp or ghetto — but the other is a broad consensus that learning the history of the Holocaust is important.

Among the study’s findings on the latter point is that 93% of respondents believed that all students should learn Holocaust material in school, with 80% saying that a major reason to do so is to prevent such a thing from happening again. Pointing to the fact that most states do not require students to learn about the Holocaust, Schneider says there’s a gap between what people say is important and what public schools actually teach. But clearly the reasoning is real: 58% believe that something like the Holocaust could happen again, with nearly as many (52%) saying it could happen in the United States today.

“It’s not as if we’re living in a country that’s totally in denial. The survey buttresses that,” Schneider says. (Only 1% of respondents said they did not believe the Holocaust had really happened.) “But there are things that really surprised us. Like, 80% of Americans have never been to a Holocaust museum, and that’s pretty surprising given the number of them. There are places where you can learn about the Holocaust all over the country.”

The study also revealed a generational difference in knowledge. For example, though 11% of all respondents either hadn’t heard of the Holocaust or weren’t sure if they had, that number was 22% among Millennials. And, while 41% of respondents overall did not know what Auschwitz was, that figure was 66% among Millennials.

The lack of detailed Holocaust knowledge among young people is of particular concern to the survey’s organizers, who say that now is a crucial moment. As the number of Holocaust survivors dwindles and the years pass, some of the most effective teaching tools will no longer be available, as hearing directly from those who experienced genocide firsthand has been shown to make a particular impact. That means Holocaust educators have to continue to figure out new ways to pass the story to future generations.

“One of the things we’re most concerned about is, if there’s this lack of knowledge while there are still survivors alive to tell their stories, what will it be like in 20 or 50 years?” Schneider says. “There’s no time to waste.” 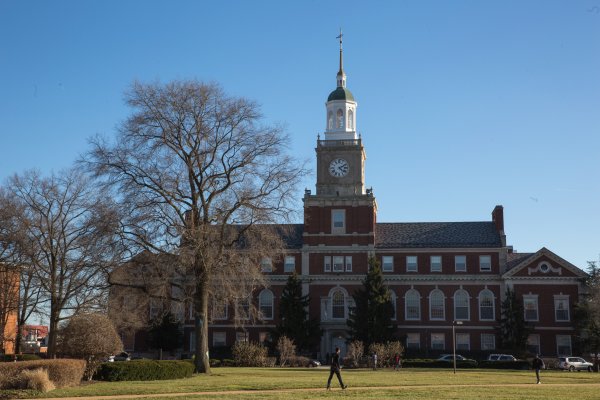 Howard Students Take Over Administration Building in Protest Amid Financial Aid Scandal
Next Up: Editor's Pick