'We Weren't Prepared for This.' Inside the Accidental Liberation of a Concentration Camp

(Left) Nandor Katz in Budapest, Hungary, circa 1943. (Right) Alan Moskin, 18, at Camp Blanding in Florida, on Oct. 30, 1944.
Photos courtesy of Nandor Katz and the Holocaust & Human Rights Education Center
By Olivia B. Waxman

In early 1945, World War II was approaching its end in Europe, a conclusion that would officially arrive when the Germans surrendered to the Allies on May 7, 1945. In practice, that final period of the war was also the beginning of a new phase of the conflict, as troops and the general public alike began to discover the extent of the atrocities they’d been fighting over.

In some ways, that reckoning continues to this day. The timing of International Holocaust Remembrance Day, which falls this Saturday, commemorates the anniversary of the Soviet Army liberating more than 7,000 prisoners of Auschwitz on Jan. 27, 1945. In the months that followed, troops from the USSR, Western Europe and the U.S. would liberate many more camps, as the Nazis scrambled to destroy the evidence of their crimes. Though the persecution of Jews and others was no secret, the liberation period was when many people were first forced to realize the extent of what the Nazi regime had been doing.

One such revelation took place three days prior to the Germans’ surrender, when U.S. Army soldiers stumbled upon the Gunskirchen Concentration Camp, a sub-camp of the death camp Mauthausen.

And the lives that changed that day have continued to intersect in surprising ways. At the time, Alan Moskin was an 18-year-old American soldier who helped liberate the camp and Nandor Katz was a 19-year-old prisoner. The two men, now 91 and 92, recently found out that they live less than an hour away from one other in New York state, thanks to a discovery by Halina Rosenkranz, the Westchester Jewish Community Services’s Holocaust survivors’ groups counselor.

In the week leading up to Holocaust Remembrance Day on Saturday, they spoke to TIME about what they remember from that fateful day and what they want future generations to remember about that time.

Moskin, who served in the Army with the 66th infantry, 71st Division, recalls that his side of the experience started when a group of U.S. Army combat soldiers stumbled upon a prisoner-of-war camp, holding mostly Royal Air Force members, near Lambach, Austria. The British prisoners told the liberating soldiers that they’d heard rumors of a different kind of camp, a concentration camp for Jews, just a few kilometers away.

“I remember my buddies and I looked at each other,” Moskin tells TIME. “We knew Hitler wasn’t fond of Jews, but we hadn’t heard anything about any concentration camps.”

The day — May 4, 1945 — was overcast as he and his fellow troops marched through a forest, trudging through wet ground, looking for the rumored camp. The first clue that the rumors were true was the smell.

“We tried to cover our mouths and noses with a bandana, but it got worse and worse, and all of a sudden I remember looking through some trees and seeing a big barbed wire sort of [guarding] a compound,” he says. “That turned out to be the Gunskirchen camp.”

With the war nearing its end, the troops faced only a very little bit of resistance as they approached the camp. Moskin himself shot a guard who refused to surrender, and then the group cut through the barbed wire and entered the camp.

Katz — speaking through his daughter, Raisa Katz, who translated for him — says the Americans came just in time: “Himmler had just sent a telegram to the commandant ordering the people running the camp to shoot everybody. But because the American soldiers came and surrounded the camp, he wasn’t able to carry out the order. He was afraid. He thought it best to surrender.”

And, as Raisa Katz points out, it was pure luck that the soldiers did arrive just then. “My father had spoken about the liberation day so many times when I was growing up, so I had this image of the American government sending the soldiers for the purpose of liberating the camp, giving [the prisoners] food, and the commandant surrendering,” she says. “So the most striking thing to me is that the Americans didn’t go to liberate the camp. This all happened by accident.”

What came next was something neither man would ever forget.

“There were dead bodies on the left, piles of dead bodies on the right — and their arms and legs looked like broomsticks covered with no flesh,” Moskin says. Slowly, the ones who were still alive stumbled toward them like “the living dead, zombies,” in striped pajamas with a sewn-on star of David, calling out in German for food, water and cigarettes.

“I remember my buddies who did [smoke] were handing out cigarettes and getting ready to light them, when they [the prisoners] took those cigarettes and pulled the wrapping off and started chewing the tobacco like a sirloin steak,” he says. The soldiers also distributed what they could from their own Army-issued rations. “Many of them would start biting and chewing so fast they started to grab their esophagus, and I remember they would start choking and falling to the crowd. We got so frightened. We didn’t know what was happening. And then the medics started screaming at us, ‘No solid food, damn it!’ We weren’t prepared for this.”

The situation was even more desperate in the barracks area.

“There was a little path or roadway with a dead horse on the ground. I can never forgot, three inmates had pulled off the bark of a tree and were digging it into the entrails of this dead horse. And then they reached down inside the dead horse, and pulled out the guts and started biting and chewing. You could see the blood squirt out.”

The inmates were willing to eat anything, attests Katz, a native of a small Carpathian Mountain town in present-day Ukraine who had been working in Budapest when he was taken to a labor camp in 1943 and then transferred to Mauthausen. “There were some people who would cut flesh off of dead bodies just eat something,” he says. “There was no water. A couple more days, I would have been dead.”

An Army lieutenant who knew he was Jewish asked Moskin if he spoke any Hebrew or German, so that he could communicate with the prisoners.

“I remember saying the German for ‘I am also a Jew.’ It just came out of me. I don’t know where I heard it,” Moskin says. “An elderly man, very emaciated, started to smile and came towards me and he went down on his hands and knees and started to kiss my boots, which were tainted with blood, vomit, and feces. I knew he was trying to be affectionate toward me, but it made me very uncomfortable to watch him kissing my filthy, bloody boots. So I picked him up under the armpits, and as he came up towards me I could see open, festering sores going up and down his neck, and lice coming out of those sores. You could imagine that I wanted to pull away because he smelled so badly, but I didn’t. He had wrapped his arms around me and he was crying. He kept saying ‘Danke [thank you], danke, Jew.’ That’s when I lost it a little bit and started to cry.”

In the days that followed, word trickled in from other Army outfits that the events at Gunskirchen were just one liberation among many.

“Every time we found out,” Moskin recalls, “we said, ‘My God, how many of these damn hellholes are there?'”

After that day, Katz remained in the camp a bit longer, nursing his two brothers who had contracted typhoid fever, until they recovered enough to be taken to Budapest for treatment at an American hospital. He later made his way to the Soviet Union and resided there until 1973, when he immigrated to the U.S., where he worked as a silkscreen printer, raising his family in Philadelphia.

Moskin ended up staying in Europe until June 1946, as part of the U.S. Army of Occupation. An aspiring lawyer, he convinced an officer in charge to let him attend a day or two of the Nuremberg trials — an experience that only further cemented his career choice. But, despite working in the justice system, in the decades that followed he found it was too painful to talk about the injustice he had witnessed firsthand.

“I didn’t speak for 50 years about my experience,” he says, scared that nightmares of the dead horse would come back. “The kids say to me, ‘Oh, you had PTSD.’ We never heard that term. The only term we heard back then was ‘shell-shocked.’ I sucked it up. By the time I got home, I took a key and locked up that part of my brain, and I threw that key away. If anyone asked me about the war, I said, ‘I did my job, I was under [General] Patton and I don’t want to talk about it.'”

That changed in the 1990s when a woman at a local Holocaust museum, referred to him by one of his Army buddies, called to ask him to speak at an event. He hung up on her. She called back. After they spoke about the way Holocaust memory was evolving, from the 1993 publication of Deborah Lipstadt’s book on Holocaust denial to Illinois requiring school curricula to include the truth about the Holocaust, he agreed to tell what he had seen at an event on June 10, 1995, at the mall in Nanuet, N.Y.

He surprised himself by talking for a good two hours. It was the beginning of a second career as a Holocaust educator. “It was like a catharsis,” he says. “All that poison I had to bottle up inside me for 50 years, it just came out of me.”

Since then, he’s spoken to middle schools, high schools and colleges nationwide. “When we’re all gone, they [Holocaust deniers] are really going to come out of the woodwork,” he says. Katz says he was “overjoyed” to meet Moskin for the first time on Aug. 11, 2017, so they could corroborate their experiences. “I was happy that I met somebody who saw the conditions, so that my story wouldn’t be lost.”

Preserving that story, and its lesson, is a job that Moskin feels remains unfinished.

“I’m going to be honest with you, my generation failed,” he says. “We didn’t get rid of the hate and prejudice. There’s still hate out there, all over the place.”

But, as Katz sees it, that’s a job that will never be complete — which is why it’s important to remember that, even at the worst moments in human history, luck and goodness can run counter to evil. 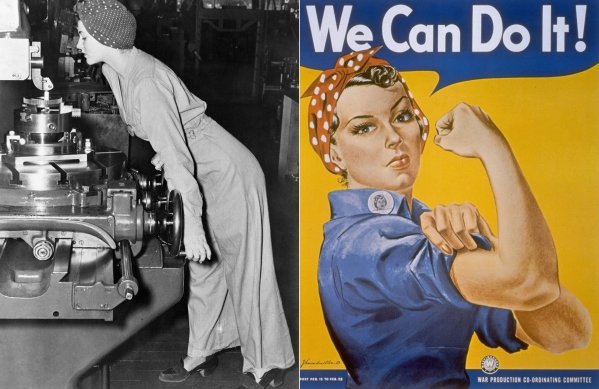 Everyone Was Wrong About the Real 'Rosie the Riveter’ for Decades. Here’s How the Mystery Was Solved
Next Up: Editor's Pick