Surge in Anti-Semitic Attacks Has Caused a 'Sense of Emergency' Among Jews Worldwide, New Report Says

More Jews were killed in anti-Semitic violence around the world in 2018 than during any other year in decades, according to a report released Wednesday by the Kantor Center at Tel Aviv University. The result has been a “sense of emergency” among Jews in many countries, resulting from concerns over both their security and their “place” in society, said Moshe Kantor, the president of the European Jewish Congress, during an address Wednesday.

“Anti-Semitism has progressed to the point of calling into question the very continuation of Jewish life in Europe,” he said.

The report noted that most of the dramatic increase in deaths was the result of a single event: October’s mass shooting at Pittsburgh’s Tree of Life Synagogue, which left 11 worshipers dead.

The countries included in the report with the highest number of cases of anti-Semitic violence include the U.S. (with over 100 cases), the United Kingdom (68 cases) and France and Germany (35 cases each.) The situation is at its worst in Western European countries — particularly in Germany, where the the Kantor Center recorded a 70% increase in violent anti-Semitism. In France, nine out of 10 Jewish students said they experienced anti-Semitism at least once during their studies. In the U.K., physical assaults were down by 17%, but there were a total of 1,652 documented anti-Semitic incidents, a 16% rise from 2017.

The Kantor Center refers to a recent report by the European Union (E.U.) Fundamental Rights Agency showing that 38% of Jews in the E.U. said they have considered leaving Europe because they fear for their safety. Anti-Semitism was considered the biggest social or political problem by 85% of respondents in their E.U. countries.

Anti-Semitism in the U.S.

The report found that college campuses in America are becoming “increasingly hostile for Jewish students who support Israel.” It cites a 2018 survey that revealed 238 incidents of harassment, vandalism and assault targeting Jewish students on 118 campuses across the U.S. In New York, city police noted a 22% rise in violent anti-Semitic attacks, according to the report.

A different report released in 2018 by the Anti-Defamation League (ADL) recorded a total of 1,879 attacks against Jews and Jewish institutions across the U.S. That marked a 5% decrease from the 1,986 incidents reported in 2017, but was the third-highest number on record since the ADL started tracking such data in the 1970s.

The situation is “particularly volatile” in the U.S., Michael Berkowitz, professor of Modern Jewish History at University College London, tells TIME. “The combination of a gun culture and conspiracy theories, the extreme right-wing and white supremacy, has created a dangerous situation for Jews,” says Berkowitz, who was not involved in creating either report.

In the wake of the shootings in Pittsburgh and a more recent fatal attack in California, American Jews are now grappling with how to respond. “The American Jewish community will need greater protection — our synagogues need more security,” Raya Kalenova, executive vice president of the European Jewish Congress, tells TIME.

According to the Kantor Center report, anti-Semitism is no longer “confined to the activity of the far-left, far-right and radical Islamists triangle” but has become mainstream, seen in “public forums, debates and discussions is manifested in all media channels, most notably the social networks.” It cites a 2018 report from the French interior ministry that states that “not one day [passes] without an anti-Semitic act” in France. “It feels like almost every taboo relating to Jews, Judaism and Jewish life has been broken,” Kantor, the European Jewish Congress leader, said.

The Kantor Center reported “a surge in online calls for the killing of Jews, for the extermination of Jews worldwide, and images of Jews being killed.” Many of these incitements have occurred on Gab, a Twitter-like platform that the report called a “haven for extremists and racists,” adding that other more popular social media platforms host pages that “denigrate and demonize Jews.” The alleged gunman in the Pittsburgh synagogue shooting posted on Gab before the rampage.

The “same anti-Semitic conspiracies” and “wild exaggerations” seen in the past have not gone away, says Berkowitz. He cites George Soros, a Hungarian-born Jewish billionaire, as an example. Soros, an 88-year-old liberal political activist and donor, has become a major target for right-wing groups and conspiracy theorists around the world. Berkowitz says Soros is being used as a “political device” to “spread anti-Semitism and to divide people.”

It’s not just about Jews, says Kalenova. “It’s about the strength of our democratic values. Anyone can become a victim.”

Stopping anti-Semitism is the job for a society that needs to “educate itself,” Kalenova adds. “Teachers, journalists, police––anyone who can reach people––must take it into their hands to understand what discrimination, and inciting hatred looks like, and to help others identify it,” she says. 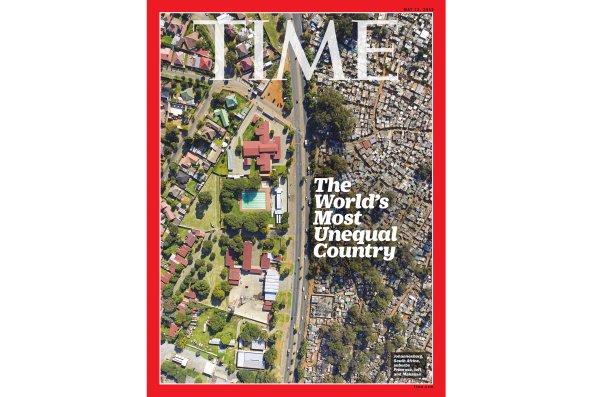 The Story Behind TIME's Cover on Inequality in South Africa
Next Up: Editor's Pick