Award Shows Are Dying. Is That Such a Bad Thing?

Awards shows are a Hollywood institution. But are they still relevant?
Illustration by Kit Russell for TIME
By Judy Berman

I used to love the Golden Globes. There’s more riding on the Oscars, sure, and the Grammys have performances from the world’s most bankable singers. But for those of us who were never all that impressed by these institutions’ efforts to identify the best in popular art–or who simply prefer low camp to high glamour–it was always the boozy, blowsy Globes that delivered. Where else could we mortals observe People‘s then reigning Sexiest Man Alive Brad Pitt thanking antidiarrheal drug Kaopectate, or Meryl Streep kicking off an acceptance speech by announcing, apparently apropos of nothing, “I wanna change my name to T-Bone”?

So I knew I was finally over awards shows when the run-up to the 2020 Globes, on Jan. 5, elicited nothing in me but dread. The feeling wasn’t unrelated to the bushfires raging in Australia or what threatened, at the time, to become a war with Iran. In past years, I might’ve treasured a night of champagne, gowns and gaffes as a respite from such concerns. This time, every aspect of the Globes, from the nominations–light on women, heavy on Joker–to a telecast that stretched past its allotted three hours, registered as a dull inevitability.

Judging by their choice to invite back self-styled provocateur Ricky Gervais for his fifth hosting gig, even NBC and the Hollywood Foreign Press Association failed to muster much enthusiasm for this year’s festivities. “I don’t care anymore,” Gervais proclaimed in his intro, before scraping the mold off jokes about a “woke” entertainment industry and exhorting the winners to keep politics out of their speeches. (Predictably, the stars ignored him.) The shots he took at self-righteous celebs for their hypocrisy in working for corporations with questionable ethics might’ve landed if he hadn’t been simultaneously earning a paycheck from Comcast and plugging his Netflix show.

By the next morning, right-wing commentators thirsty for famous allies had anointed Gervais their savior, with Fox News host Greg Gutfeld opining that the comedian’s late-night-ready monologue had “said everything you’ve ever wanted to say to that self-obsessed pile of pulsating flesh known as Hollywood,” while conservatives insisted Twitter’s leadership was purposely keeping his name from trending. So massive was the outpouring that Gervais took to Twitter as well, asking, “How the f-ck can teasing huge corporations and the richest, most privileged people in the world be considered right-wing?”

The same day brought the also-inevitable news that the Globes had hit an eight-year ratings low. At 18.3 million, the audience for Gervais’ roast was even smaller than the one that tuned in for uncontroversial hosts Sandra Oh and Andy Samberg in 2019. With 94% of Americans opting out, maybe the pundits really were the only ones watching. So, as traditional TV viewership dwindles and the list of stars willing to withstand the public scrutiny of a hosting gig shrinks, while unfiltered celebrity thoughts abound on social media, it seems worth asking: Are we–or, for that matter, the entertainment industry–still getting anything out of these shows?

Illustration by Kit Russell for TIME

We’ve entered the second decade of streaming dominance, and original cable fare has been cutting into the networks’ numbers for even longer; millions watched Real Housewives, Live PD or Power instead of the Globes this year. Awards shows that once attracted enormous audiences are, notoriously, tanking in the ratings. After decades of consistently attracting at least 32 million viewers–with typical broadcasts drawing 40 million and clearing 50 in those few years with blockbuster Best Picture nominees–the Oscars slipped to a low of 26.5 million in 2018. If last year’s 29.6 million was a slight improvement, it also suggested that nominating megahits like Black Panther for the top prize wasn’t sufficient to restore the telecast’s relevance.

The problem isn’t just an excess of viewing options or the epochal shift away from watching programs as they air, which began back with the advent of the VCR. Awards shows are also suffering from the political polarization of the American public, as partisanship invades sectors of society that used to be essentially neutral ground and nurtures the vitriol with which conservatives like Gutfeld attack Hollywood types for their left-of-center views.

Politics aside, young people are showing less and less interest in awards season. Variety recently noted that the median age of viewers for all four top-tier telecasts–Oscars, Globes, Emmys and Grammys–had soared past 50, an increase of more than 10 years since the turn of the millennium. It makes sense. Gen Z-ers aren’t just streaming natives; they’re devotees of social video platforms like YouTube and TikTok, whose homegrown stars (Lil Nas X, Lilly Singh) only show up on the red carpet once they’ve crossed over to conventional fame.

Considering that the standard TikTok video is 15 seconds, it’s tempting to blame kids’ short attention spans for killing yet another beloved tradition. But they’re not wrong to be bored by ceremonies flabby with ads, shout-outs and promotional movie clips. Why sit through a telecast whose run time rivals The Irishman‘s when you could just watch The Irishman?

Complaints about awards-show tedium are nothing new. In 1998, when Titanic pulled in a record 55 million Oscars viewers, then Baltimore Sun critic Ann Hornaday noted that “at times the proceedings were subdued to the point of catatonia.” If these telecasts have grown even duller since then, one reason may be that no one wants to host them anymore. Stars who take the gig are more likely to be flayed than feted (see: James Franco and Anne Hathaway’s awkwardness in 2011, and Seth MacFarlane’s “We Saw Your Boobs” fiasco two years later). Last year, Kevin Hart withdrew from the Oscars amid criticism over his history of antigay jokes and was never replaced. But going hostless doesn’t seem to be the answer, either; 2019’s host-free Emmys plummeted 32% in the ratings, drawing just 6.9 million viewers.

Can the awards show be saved? It would be hard to mount a passionate defense of them at the best of times, but in 2020 the question seems absurdly trivial. Instead of watching Joaquin Phoenix dribble out koans to one side of the aisle while Gervais lands zingers for the other, shouldn’t we be registering voters or aiding in hurricane-relief efforts? I mean, why wouldn’t we abandon these self-congratulatory rituals without another thought?

Unfortunately, there are the awards themselves to think about. I can’t imagine them attracting even the diminished amount of attention they now enjoy if winners were announced via press release. And maybe that’s fine–because Emmy voters are erratic enough to celebrate Fleabag‘s sublime final season and Game of Thrones‘ awful one in the same year, or because efforts to diversify the Academy haven’t stopped the Oscars from honoring simplistic racial parables like Green Book. I haven’t even gotten into the decadence of awards PR campaigns, the fact that Oscars season has squished all “serious” film releases into the fourth quarter of the year, or the futility of comparing very different artworks.

Yet for all their flaws, once in a while, awards still elevate deserving winners. The Oscars box-office bump is real: rereleased after its Best Picture upset, Moonlight earned $2.5 million its first weekend alone–not bad for a film that cost only $1.5 million to make. The Grammys’ Best New Artist category occasionally kick-starts the career of a thrilling, genuinely obscure talent like Esperanza Spalding. And now that risk-averse studios are cutting down on stories for adults in favor of spaceships and superheroes, you can’t underestimate the role awards play in ensuring that studios keep making “prestige” titles.

So maybe it’s a minor blessing that as much as their ratings have declined, the major awards shows don’t seem to be in danger of cancellation. They still outperform most networks’ nonfootball lineups, after all. (As Gervais said, “No one really watches network TV.”) Yet it’s also hard to envision producers figuring out how to restore these telecasts to the fun collective viewing experiences they once were. With another hostless Oscars on the horizon and Grammys headlined by overexposed 2019 breakouts Lizzo and Billie Eilish, the rest of awards season 2020 seems unlikely to spark more joy than the Globes. But instead of wringing our hands over the demise of a tradition that isn’t really ending, we’d do well to invest our attention in the thing that awards exist to celebrate: great art. 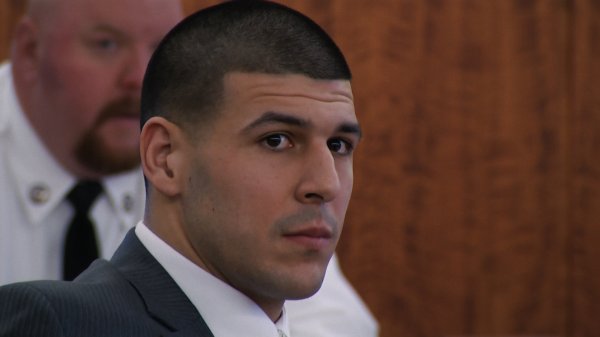 Netflix Docuseries Killer Inside: The Mind of Aaron Hernandez Probes the Secret Life of the Convicted Killer and Ex-NFL Star
Next Up: Editor's Pick