Senators Have to Be in Washington During the Impeachment Trial. That's a Problem for the Ones Running for President

The looming Senate trial of President Donald Trump has claimed its first victim, and it’s not the besieged Commander in Chief, any of his closest aides or even a Republican. On Jan. 13, Senator Cory Booker ended his race for the Democrats’ White House nomination, blaming the decision partly on the fact that “the urgent business of impeachment will rightly be keeping me in Washington.”

Booker’s attendance at Trump’s trial is not optional. Senators are required to be in the Capitol for it, every afternoon from Monday to Saturday, under penalty of arrest by the sergeant at arms. And Booker’s not the only one affected. Once the proceedings begin in earnest–perhaps as soon as Jan. 21, just 13 days before the Iowa caucuses–four candidates for the Democratic nomination, including top contenders Elizabeth Warren and Bernie Sanders, will be handicapped in the first-in-the-nation contest. “It’s a very difficult time for these campaigns,” says veteran Democratic strategist Matt Paul. “This is exactly when you want your candidate in the state a great deal.”

The Senate trial hands a temporary but critical edge on in-person campaigning to former Vice President Joe Biden and former South Bend, Ind., Mayor Pete Buttigieg, as well as to billionaires Michael Bloomberg and Tom Steyer, who are already blanketing the nation with ads. That may be good news for those Democrats who fear a far-left lurch under Warren or Sanders. It’s also a reminder that even an embattled Trump can influence the contest for the White House, playing captor to candidates vying to end his presidency the old-fashioned way.

Those Presidential hopefuls who happen to work in Senate office buildings are doing their best not to disappear from the scene. Senator Amy Klobuchar, who has seen a late rise in her polling in Iowa, is bracing for long hours at her desk on the Senate floor during impeachment proceedings, and even longer ones before and after as she attempts to stay in contention. Her campaign is considering things like beaming her into videoconferences in libraries, schools and living rooms so she can take voters’ questions from afar. Klobuchar will lean on a network of backers: she says she has more endorsements from current and former Iowa elected officials than anyone else in the race. “We are going to do everything we can to continue to get her message out,” a senior Klobuchar campaign aide says.

The bigger-name Senators in the race, Sanders and Warren, who have been drawing huge crowds as they compete for the progressive wing of the party, are including out-of-state proxies in their arsenals. Representative Alexandria Ocasio-Cortez has been promoting Sanders, and former Housing and Urban Development Secretary Julián Castro has been extolling the potential of his pal Warren. Allies of both candidates argue that the time off the trail won’t be as damaging to them as it will be to, say, Colorado’s Michael Bennet, who’s gone all in with a bid centered on New Hampshire’s Feb. 11 primary. The Warren and Sanders crews say their backers can weather a little neglect, whereas folks like Bennet and Klobuchar are still at a more fragile stage. Bennet’s campaign says New Hampshire is an easier jump for evening events.

Sanders also has money to mitigate his absence. He paid more than $77,000 for Facebook ads targeting Iowa in 2020’s first week, compared with the less than $8,000 Biden’s campaign spent chasing the same audience during that period, according to a tracking database published by the Democratic consultancy Bully Pulpit Interactive. Warren, whose fundraising sagged at the end of 2019, spent less than $15,000 on Facebook ads during that window.

Even with proxies and campaign funds hard at work, Sanders and Warren are at risk if their message of a revolution gets stuck in Washington. There is little better than in-person, retail-style campaigning in Iowa and New Hampshire, where voters like to poke and prod the campaigns. A Des Moines Register/CNN poll released on Jan. 10 found almost one-third of likely Iowa caucusgoers still undecided or backing someone who is not viable under party rules that require 15% support to win any delegates.

Sanders, whose momentum wasn’t disrupted by an October heart attack that kept him off the trail, promises an aggressive campaign no matter what. “He’ll be out there on weekends, and he can get out there on evenings,” says Representative Ro Khanna, a national co-chair of Sanders’ campaign. “His priority will be the Senate trial. He’s made that clear.” Warren is similarly putting on a brave face. “There are some things that are more important than politics, and if we have an impeachment proceeding going on, I will be there,” she told reporters in Rochester, N.H., on Dec. 7. “This is not about politics.”

Some voters appreciate that stance. “I respect them more for going and upholding their oath to the Constitution and their duties there,” says 49-year-old Mary Kay Smith of Des Moines. That’s not keeping Smith from keeping her options open. On Jan. 13, Smith, who is leaning toward Buttigieg, attended a town hall to see fringe contender Andrew Yang speak. 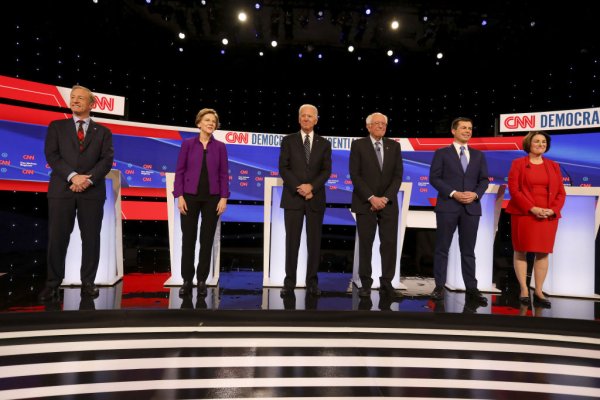 Biggest Takeaways from the January Democratic Debate
Next Up: Editor's Pick