In the Democratic Primary, Amy Klobuchar Makes the Case for Pragmatism Over 'Pipe Dreams'

It’s a brisk Saturday morning in November, and Amy Klobuchar is pondering the menu at a Sioux City, Iowa, diner where a dish of two buttermilk biscuits smothered in country-style gravy is listed among the “lite” breakfasts. The Minnesota Democrat usually goes for yogurt or a poached egg, she tells me, but today she orders two scrambled eggs with cheese, a side of toast with Smucker’s strawberry jam and a cup of coffee. She needs the extra fuel to get her through the next 12 hours: two campaign events, one caucus training, a three-hour drive back to Minnesota and some debate prep.

Since launching her presidential campaign in February, Klobuchar, 59, has run a workmanlike race. “I figure you do the job in front of you,” she says, describing her approach to campaigning. “You do the things you’re supposed to do, you go meet people, you get endorsements.” As other candidates have dropped out or surged ahead—her fellow Midwesterner, Mayor Pete Buttigieg of South Bend, Ind., is now in first place in Iowa, according to a Nov. 12 Monmouth survey—Klobuchar has remained consistent: she’s been polling at 2% to 3% nationally since September. “You don’t expect some magic thing is going to happen, and they’re just going to give it to you with a silver spoon,” she says.

Her message to voters is similarly down to earth. While Senators Elizabeth Warren and Bernie Sanders have proffered revolutionary proposals—including free college tuition, nationwide student-debt cancellation and Medicare for All—Klobuchar has staked out a platform defined by pragmatism. Her higher-education plan centers on free in-state community college and higher Pell Grant caps, and her health care proposal offers a public option through which people could purchase access to Medicare or Medicaid. “The difference between a plan and a pipe dream is something that you can actually get done, and we can get this public option done,” she said at the Oct. 15 debate. As former Vice President Joe Biden has faded in some polls, Klobuchar has seized the opportunity to brand herself as the moderate alternative—a take-your-vitamins realist in a field defined by idealism.

There’s some evidence her strategy is working. In the six days after the October debate in which she slapped down Warren’s multi-trillion-dollar health care plan, Klobuchar’s campaign raked in $2.1 million—more than 40% of what she’d raised in the entire third-quarter filing period. She has since become one of 10 candidates to qualify for the November debate in Atlanta, and one of six to qualify for the December one in Los Angeles. Her support in the Hawkeye State has swelled too. She’s now at 5%, according to the Monmouth poll, edging out Senator Kamala Harris and former HUD Secretary Julián Castro and coming in fifth overall. “She just has sensible ideas,” says Carol Hallman, an attorney who lives in Pocahontas, Iowa. Describing her aversion to some candidates’ higher-education proposals, Hallman says, “Many people I know have already paid their student loans. Why should there be free four-year college now?”

Former Vice President Walter Mondale, a longtime mentor, says the Senator’s message is powerful in a time of political turmoil. “We need to be reasonable, we need to cross party lines, try to unite the country,” he says. “She’s said that very clearly.” National Democrats increasingly attuned to the question of winning against an embattled President Trump agree it’s too soon to write off Klobuchar. “I think her time is about to come,” Minnesota Congressman Dean Phillips says. As an experienced politician with a demonstrated ability to appeal to centrists, independents and moderate Republicans in a heartland state, she remains a viable VP pick. In 2016, Trump lost Minnesota to Hillary Clinton by less than 2%; Klobuchar won her 2018 re-election by 24%. That’s the kind of appeal Democrats should pay attention to if they want to best Trump, argues veteran GOP strategist and vocal Trump critic Rick Wilson. “You might want to have people that don’t scare the sh-t out of people on your ticket,” he says.

If Klobuchar’s version of Midwestern progressivism defines her approach to public policy, it is also core to who she is. Raised in a middle-class Minneapolis-area family, Klobuchar had a grand-father who was an iron-ore miner who saved money in a coffee can. Her mother was a second-grade teacher who retired at 70, and her father was a newspaper columnist who battled alcoholism. (Her father’s addiction came into public view at Supreme Court Justice Brett Kavanaugh’s confirmation hearings, when the nominee asked if Klobuchar had ever blacked out from drinking. “I have no drinking problem, Judge,” she said, winning plaudits for her poise.)

Klobuchar’s entry into politics was also driven by practical concerns. When her daughter Abigail’s birth required a prolonged hospital stay, Klobuchar discovered insurance regulations that evicted her from the maternity ward after 24 hours. The new mother took the issue to the state, helping pass one of the nation’s first laws mandating that insurance companies provide 48-hour hospital stays for other moms. Two years later, she won her first election to a county attorney seat, and eight years after that, she became the first woman elected to represent Minnesota in the U.S. Senate. From January 2017 to January 2019, Klobuchar introduced more bills than any other Democratic Senator.

But translating legislative success into national popularity has proved a harder nut to crack. Over breakfast, Klobuchar suggests that her gender and appearance might not help. “Compared to those people on that debate stage, I look short,” she says of her 5-ft. 4-in. stature. “I always knew that it’s a big deal in politics—how you look and your hair and everything. But this is a whole different level.” The next day on CNN, Klobuchar insinuated that Buttigieg, 37, would not be considered presidential material if he were a woman. “Do I think we would be standing on that stage if we had the experience that he had?” she said on Nov. 10, referencing two other women in the race, Warren and Harris. “No, I don’t. Maybe we’re held to a different standard.”

Klobuchar has also had to grapple with unforced errors. A February BuzzFeed article described her yelling at staffers over misplaced commas, threatening to fire them in front of their colleagues, and on one occasion, chucking a binder that accidentally hit an aide. Klobuchar had the highest staff-turnover rate among her Senate colleagues from fiscal years 2001 to 2018, according to data tracked by LegiStorm, a nonpartisan research firm. When I asked Klobuchar about the report, she pointed at her prolific legislative record, a testament, she says, to a supportive staff. But, she added, “you can always do better, and I will.”

A few days after our breakfast in Iowa, I caught up with Klobuchar in her unpretentious Capitol Hill apartment, where a $1.99 egg-poaching gadget adorns the kitchen and the sole flourish—a $10 bouquet of tulips—was purchased in anticipation of my visit. Klobuchar’s husband John Bessler, a law professor, joked that if my next stop was to interview billionaire Michael Bloomberg, “the furniture might look a little different.” But this down-home, kitchen-table pragmatism goes deeper than interior decor. It’s the heart of Klobuchar’s campaign. Her supporters aren’t looking for soaring proposals or revolutionary talk; they just want a voice in Washington who will show up and get something done. 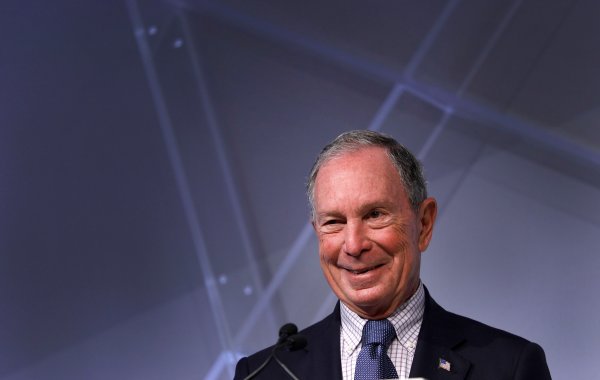 Bloomberg Shakes Up 2020 Field
Next Up: Editor's Pick