U.S. President Donald Trump speaks to members of the media during a meeting with Prime Minister of Greece Kyriakos Mitsotakis in the Oval Office of the White House in Washington, DC., on Jan. 7, 2020.
Alex Wong—Getty Images
By Madeline Roache

A majority of people surveyed in 32 countries across the world, from Argentina to Australia and Canada to the Czech Republic, have “largely negative views” of President Donald Trump, and do not trust him “to do the right thing” when making decisions on international affairs, according to a new survey from the non-partisan Pew Research Center, a Washington, D.C.-based think tank.

Furthermore, more respondents viewed Trump with “no confidence” than they did Russian President Vladimir Putin or Chinese President Xi Jinping. (Inversely, Trump received a vote of confidence from 29% of respondents to Xi’s 28%.)

The survey, published on Jan. 8, was conducted from May to October of 2019. It found that more than two-thirds of the respondents said they don’t trust Trump when it comes to world affairs, in contrast to the 64% who expressed confidence in former President Barack Obama in a survey published in June 2017.

“In nearly all nations where trends are available, Trump receives lower ratings than his predecessor,” said the report. “International confidence in the U.S. President plummeted after Trump’s inauguration, while favorable ratings for the United States also declined.”

Pew Research Associate Janell Fetterolf tells TIME the survey can be useful to policymakers, “especially those who work in diplomacy and foreign policy for their decision making.”

Western Europe was especially anti-Trump; about three out of four people surveyed in Germany, Sweden, France, Spain and the Netherlands said they don’t trust the U.S. President. In Mexico, attitudes were especially negative; 89% said they didn’t trust Trump and only 36% gave the U.S. a favorable rating.

Still, Trump had distinct “pockets of support” in parts of the world. A majority in the Philippines, Israel, Kenya, Nigeria and India said they trust the American President.

The President tended to be viewed more positively in countries with conservative or right wing governments, and among those respondents who identified ideologically with the political right in their countries.

In the Philippines, where President Rodrigo Duterte has ruled with increasingly authoritarian tendencies, Trump has a 77% approval rating. In Israel, where Trump has enjoyed a close relationship with Prime Minister Benjamin Netanyahu and decided to move the U.S. embassy to Jerusalem, Trump’s confidence rating was 71%.

56% viewed Trump with confidence in India, where right-wing Hindu nationalism has surged under Prime Minister Narendra Modi. In Poland, where the right-wing populist Law and Justice Party has attacked the independence of the judiciary since taking control of parliament in 2015, 55% of respondents expressed confidence in Trump. (The report noted that Polish President Andrzej Duda visited the U.S. in June 2019, while the survey was in the field, and the two leaders announced a plan to strengthen the military relationship between their countries.)

Supporters of right-wing parties in Europe — from the National Rally party in France from UKIP in Britain — were more likely to support Trump’s wall along the US-Mexico border and his tariffs, despite overall global opinions being negative.

Certain Trump administration policies were clearly unpopular. The strongest disapproval was recorded against the U.S. increasing tariffs on imported goods, withdrawing from international climate change agreements, building a wall on the U.S.-Mexico border and restricting immigration into the country.

Opposition toward Trump’s withdrawal from the Paris Agreement on climate change — which he announced in June 2017 and made official in November 2019 — were strong in Europe (78%), South Korea (82%) and Australia (78%).

The policy that was viewed most positively was Trump’s direct negotiations with North Korean leader Kim Jong Un. (Still, only a median of 41% said they approved of this move, while 36% opposed it.)

Israelis gave the U.S. its highest rating of 83%, but there was a sharp ethnic split — 94% of Israeli Jews see the U.S. favorably, compared to only 37% of Israeli Arabs. 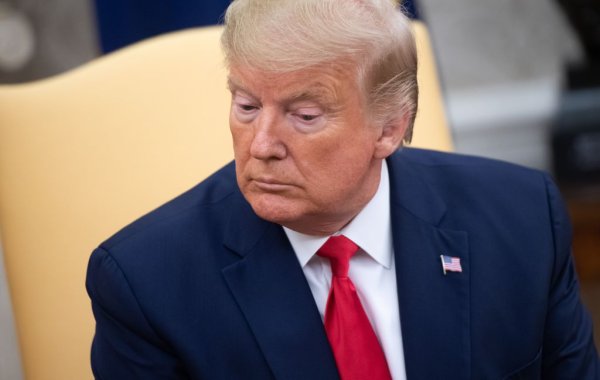 Trump Says Now 'Isn't the Right Point' for U.S. Troops to Pull Out of Iraq
Next Up: Editor's Pick