U.S. President Donald Trump, left, meets with North Korean leader Kim Jong Un at the North Korean side of the border at the village of Panmunjom in Demilitarized Zone on June 30, 2019. A senior North Korean diplomat on Tuesday, Oct. 1, 2019, says North Korea and the United States have agreed to resume nuclear negotiations on Oct. 5 following a months-long stalemate over withdrawal of sanctions in exchange for disarmament. (AP Photo/Susan Walsh, File)
Susan Walsh—AP
Ideas
By Christopher R. Hill
Hill was a career foreign service officer for 33 years and a U.S. ambassador four times. From 2005-2009 he served as the U.S. envoy to the 6-party talks aimed at the denuclearization of North Korea. He is currently a professor at the University of Denver.

With the shakedown in Ukraine and betrayal of the Kurds in Northern Syrian, another foreign policy failure this past week almost went by without notice: the complete breakdown of talks between U.S. and North Korean diplomats on North Korea’s denuclearization.

The U.S. and the North Koreans have engaged in a negotiation of sorts since the spring of 2018 when President Trump accepted a proposal by Kim Jong Un to meet face to face. Trump’s willingness to meet was hailed in Northeast Asia as a courageous gesture to resolve the longstanding impasse over North Korea’s nuclear program. At the time, both South Korean president Moon Jae-In and Japanese Prime Minister Abe, in a rare display of agreement on anything, suggested that Trump was deserving of the Nobel Peace Prize for his courage in doing what no other sitting US president has been willing to do.

Three summits later which have included presidential trips to Singapore, Hanoi, and even a presidential walk across the demilitarized zone into North Korea itself, there is little indication that any progress whatsoever has been achieved in persuading the North Koreans that they can have a better future without nuclear weapons. At first, Trump’s approach was to engage in a grand bargain, a willingness to embrace the North Korean leader by lifting all sanctions against that country in return for complete denuclearization. Those grand thoughts have given way to a more incremental and much more familiar process of going step by step. But even that has yielded little in the way of concrete actions primarily because the North Koreans have essentially refused to meet any U.S. negotiator unless that negotiator is named Donald Trump.

Despite the notable lack of progress, President Trump has continued to make North Korea his signature foreign policy triumph, even suggesting he would have won the Nobel Peace Prize if the process had not been so – you guessed it – rigged.

On the positive side of the ledger, North Korea has indeed restrained from nuclear tests, and tests of long-range missiles. North Korea also released some US prisoners, hostages as Trump not entirely inaccurately described them, and agreed to restart the search for the remains of U.S. service members killed during the Korean war, a program halted by then Secretary of Defense Donald Rumsfeld in 2006 out of concern that too many fees were being paid to the North Koreans.

But on the crucial issue of ending their nuclear weapons program the North Koreans have been unwilling to discuss the matter or even to meet with US negotiators until last week.

On October 1, in the context of demanding new offers from the U.S. and threatening they may give up on the effort, North Korea announced that working level talks with the US would soon resume. As if to celebrate their announcement, the North Koreans followed up hours later with more tests of its newest generation shorter range, solid fuel missiles. It was a gross violation of UN Security Council resolutions, and an ominous one because this new generation of weapons appear to be intended for a new submarine force capable of firing off missiles at a moment’s notice. It gives U.S. military planners an entirely new and dangerous threat. President Trump and his ever faithful bulldog Secretary of State Pompeo (seemingly unperturbed by the various North Korean insults launched his way) have both downplayed the significance of the tests.

The two “working level” negotiating parties gathered on the outskirts of Stockholm at a remote conference center to explore some “new ideas.” It wasn’t pretty. After a few hours of discussions, the North Koreans abruptly announced they had had enough, and walked out, claiming the US had failed to follow through on anything new. They described themselves as very disappointed. While the North Koreans, with their customary charm called the talks nothing short of “sickening” and “nauseating,” the State Department spokesperson, Morgan Ortagus, took a somewhat more philosophical view, explaining to no one in particular that the two sides will not overcome 70 years of war and hostility in one day. The U.S. side suggested they gather in two weeks for another day of sharing new ideas, but the North Korean chief negotiator, Kim Myong Gil, brushed aside that suggestion and headed home.

President Trump desperately wants the process with North Korea to enter the win column, at least through the November 2020 elections, and would probably be content to keep the status quo even with the ominous new missile tests. The North Koreans have some incentives to keep things where they are, but the sanctions, the strongest ever arrayed against them, are clearly hurting and they need some relief. They seem willing to take their provocations further by the end of the year, possibly making good on their threat to end the process. As disastrous as last week was in Stockholm, both sides may have incentive to keep talking. 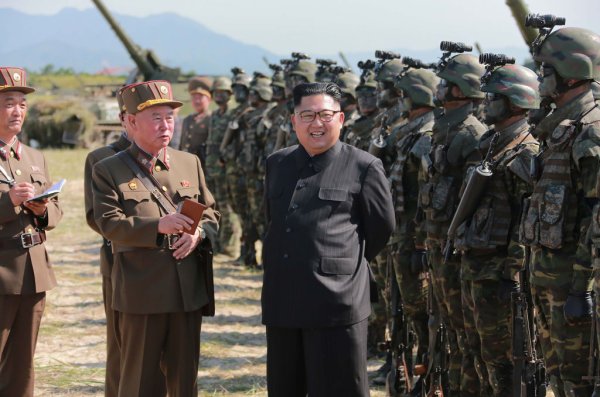