In A League of Their Own, Tom Hanks famously yelled that there is no crying in baseball, but that rule apparently doesn’t apply to Hanks on the Golden Globes stage.

Viewers of the 77th Annual Golden Globe Awards found it difficult to watch America’s Dad cry while accepting the award. Hanks‘ tearful moment came as he thanked his family for their support, after Charlize Theron presented him with the 2020 Cecil B. DeMille Award.

Hanks choked up, gesturing toward the family’s table, where his children and his wife, Rita Wilson, sat proudly. “A man is blessed with a family sitting down front like that, a wife who is fantastic in every way, who has taught me what love is, five kids who are braver and stronger and wiser than their old man is.”

Hanks blamed the sudden burst of emotion on his cold medicine. Still, watching the man behind Forrest Gump and Captain Phillips start to cry was too much to handle for many Twitter users.

In addition to his honorary award, Hanks was nominated for his supporting role as Mister Rogers in A Beautiful Day in the Neighborhood. 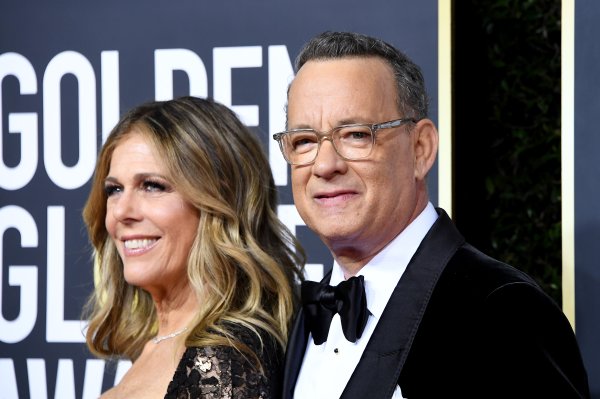 Rita Wilson's Golden Globes Glam Squad Was Nowhere To Be Found, and the Internet Was Rapt
Next Up: Editor's Pick