Rita Wilson's Golden Globes Glam Squad Was Nowhere To Be Found, and the Internet Was Rapt

Rita Wilson caused quite a stir on Sunday afternoon ahead of the 77th Annual Golden Globes, as she reported that her hair and makeup stylist was quite late just a few hours before the event.

In a tweet, the actor said that her “hair and makeup person” was “one hour and twenty minutes late.” In a second tweet, she said she was “trying to be zen” about it all. But in a third tweet, she said that though the stylist was booked in September, they were still — you guessed it — not there.

Wilson elaborated on the situation on her Instagram, writing that she’d only have an hour to get glammed up. Julianne Moore showed some support for her fellow star, commenting the extremely relatable phrase, “Omg I feel u.”

In the time between the posts and her appearance on the red carpet alongside husband Tom Hanks, many social media followers were left wondering: Could Rita Wilson’s Golden Globes look be salvaged?

Even Chrissy Teigen was invested in this mystery, tweeting that she couldn’t “go on” until she found out what happened.

Others joked that they were indeed holding Wilson’s stylist hostage, including actor and comedian Joel Kim Booster.

Though many seemed to enjoy Wilson’s publicizing of her stressful day, others called the tweet insensitive given the deadly bushfire crisis in Australia and the recent U.S. strike on Iranian military general Qasem Soleimani. Others responded, in turn, that not every tweet merits that level of scrutiny.

But in the end, someone must have shown up with with some eyeliner and mascara, since the look turned out fabulous. 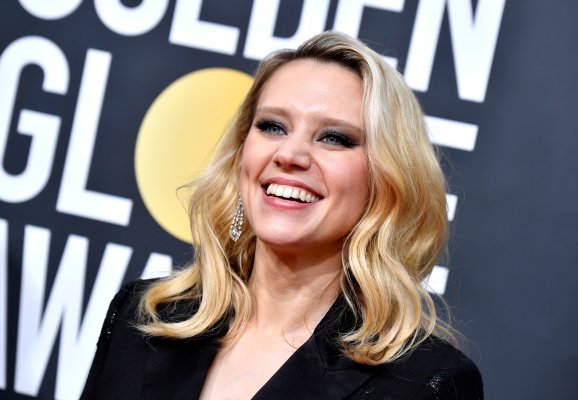 ‘Thank You, Ellen, For Giving Me a Shot at a Good Life.’ Kate McKinnon Delivers Moving Tribute to Ellen DeGeneres at the 2020 Golden Globes
Next Up: Editor's Pick